The map below shows that the rift runs parallel with the sea-edge of the shelf. The gap between the top edge of the rift and the sea is currently around 19 kilometres (12 miles). However, the rift will likely continue to grow and if it reaches the sea, the resulting iceberg would be massive. 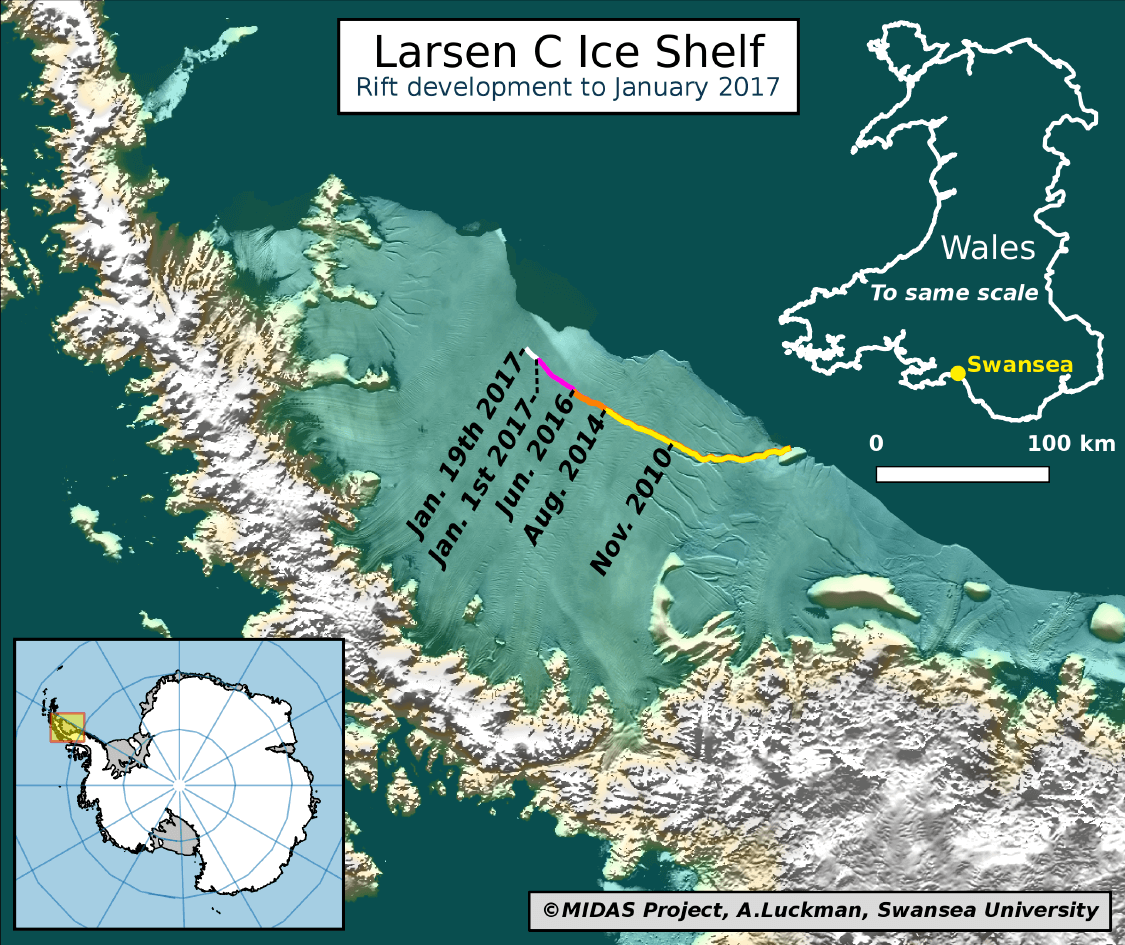 According to the data from the scientists, the pace of growth of both the crack’s width and length is increasing.

Stunning Drone Footage of the Crack

The area may not break off as the crack is entering a more stable area of the ice. The scientists say that means they cannot predict the outcome with any surety.

The researchers reiterated a statement they released earlier this month, signaling their suspicion that this will lead to the breakoff of a nearly Delaware-size piece of ice and “leave the ice front at its most retreated position ever recorded; this event will fundamentally change the landscape of the Antarctic Peninsula.” They fear that the break could speed up the flow of the ice seaward and potentially destabilize the shelf, which holds back enough ice above sea level to raise oceans by 4 inches [ten centimetres]. But not every scientist agrees that will be the outcome. …

“Every advance would seem to bring the end closer,” said Adrian Luckman, a researcher with Swansea University who heads up the project.

“However,” Luckman continued, “the rift has now entered the softer suture zone ice originating from Cole Peninsula, which we believe to be more substantial than elsewhere, so it is still impossible to make predictions.”

Whatever happens, there is no doubt that the crack is caused by global warming. And, if temperatures continue to rise, the area of ice will break off.

Yesterday, NASA announced that 2016 was the warmest year on record globally:

Earth’s 2016 surface temperatures were the warmest since modern recordkeeping began in 1880, according to independent analyses by NASA and the National Oceanic and Atmospheric Administration (NOAA).

Globally-averaged temperatures in 2016 were 1.78 degrees Fahrenheit (0.99 degrees Celsius) warmer than the mid-20th century mean. This makes 2016 the third year in a row to set a new record for global average surface temperatures.

The 2016 temperatures continue a long-term warming trend, according to analyses by scientists at NASA’s Goddard Institute for Space Studies (GISS) in New York. NOAA scientists concur with the finding that 2016 was the warmest year on record based on separate, independent analyses of the data.

It continues to be of vital importance that we do all we can to mitigate the effects of climate change. The Paris Accord, signed by almost every country in the world, will go a long way towards that. It was only able to be signed because President Obama brought the biggest emitter to the table. This was celebrated worldwide after years of the United States avoiding their responsibilities. 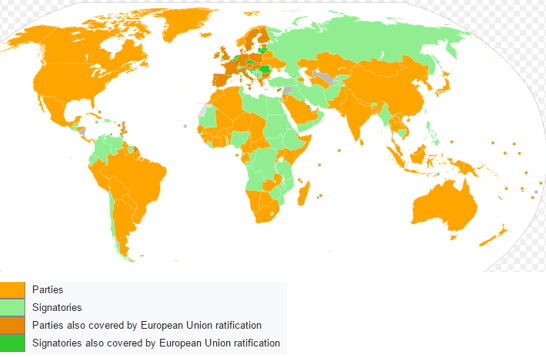 World leaders are now extremely angry due to the comments president-elect Trump is making regarding climate change. Especially, they are upset at his threats to withdraw from the Paris Accord. Some are apparently considering a carbon tariff on US goods. The Accord is not legally binding in any effective way so he can effectively ignore it. Further, if the US does not abide by their promises, there is a high risk some others won’t either.

If president-elect Trump fails to meet his country’s obligations under the Paris Accord, Delaware-sized icebergs could become commonplace.

If you enjoyed reading this post, please consider donating a dollar or two to help keep the site going. Thank you.