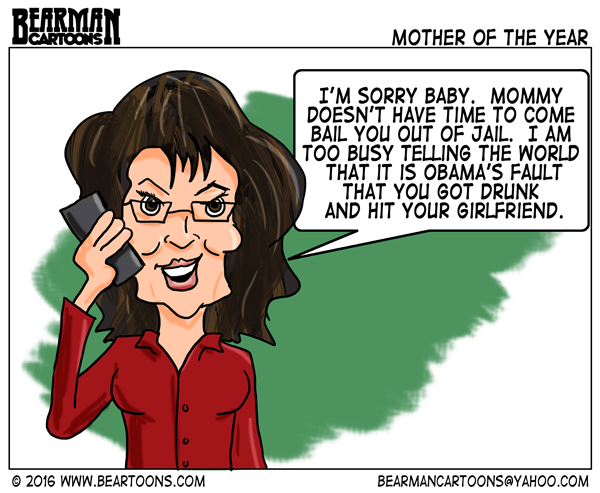 I could have just made up a special Tweets section for this story, but it’s so funny I couldn’t resist writing about it. (Of course, it wasn’t very funny for those who were part of it, and I don’t want to diminish the distress I’m sure they felt.)

But the whole thing is like a story written for a tragi-comic farce based on the real life characters most of us first came across during the 2008 US election. Sarah Palin, as I’m sure everyone remembers, was the woman the Republicans thought was a suitable person to be president if John McCain won the election but didn’t make it through his term.

She was a joke in her own right. As far as intelligence goes, she was even worse than the current incumbent! She brought with her a family that wasn’t ready for the national spotlight either.

Here’s the latest story on the Palins from CNN:

It’s got everything you’d put in if you were making a story up!

The son trying to steal a truck from the father. The father pulling a gun on his son. (How else to stop him?!) The son telling his father to, “Shoot him,” several times. Dad didn’t do as he was told so the son got him in the floor and punched him in the head several times. (Of course he did! What else would you do?!) Mum phoning the police and saying the son’s having a bad reaction to medication. (Yes, that happens when you mix it with alcohol.) The son leaving his father bloodied and bruised.

The son it seems hasn’t been brought up to respect women. He has an arrest record for domestic violence.

It isn’t only the men in the family who are violent though, it’s everyone. In 2014 the police attended a drunken brawl at a family party at the Palin home. At that party it was not only the son who was a problem. Note was made of the daughter getting in a fist fight with someone else at the party too.

You remember the daughter. She was the only young girl to get pregnant outside wedlock that Republicans didn’t label a slut. Instead we were to admire her for her bravery in not having an abortion. Besides, she was going to marry the father – they got engaged soon after the announcement of mum’s candidacy despite the fact they weren’t dating at the time. He was gone as soon as the election was over of course.

I don’t actually want any family to go through stuff like this, but I do wonder what the phrase “Christian Family Values” means when stuff like this happens.

On a separate matter, keep an eye out for news about the US Green Party in the next few days. There may be news that because Russia didn’t believe they could get Trump to win on his own, they were also supporting the Greens. The idea to split the liberal vote more in favour of the Greens in order to deprive the Democrats of votes may be something that has yet to surface. I’m probably reading too much into a comment in an interview I heard. If there’s anything in this, a proper journalist will work it out. Stay tune.

An update on the situation in Zimbabwe.

What’s Going On In Zimbabwe? | NowThis World https://t.co/Qy88nBLViZ via @YouTube

A synopsis of why Trump’s announcement on Jerusalem is a bad idea.

Putin announces that the next presidential election in Russia will be held in March 2018. pic.twitter.com/isjxggGYHg

This is from Facebook. I think as many people as possible in the US need to see it. Robert Reich’s analysis of the Trump plan is accurate. I recommend you search out his writings on it.

This is how the US Tax Cuts are really paying for themselves. There will be no “trickle-down” effect.

What is wrong with the police in the US? I know they’re not all like this, but the fact that people like this got through the recruitment process is pretty shocking. This kind of thing ruins it for all police. And wtf is the story with $50,000 bail for a traffic violation? I feel sick now.

More people are realizing that the office Christmas Party isn’t an excuse for sexual abuse!

The future is looking better! pic.twitter.com/TEM7V5eRhC

This is apalling! (Good) Journalists have one of the most important jobs on the planet.
(Via Ann German.)

Just sayin’.
(Via Ann German, who’s been playing Marley in a production of A Christmas Carol this year.)

A Christmas Carol is the heartwarming tale of how rich people must be supernaturally terrorized into sharing.

The GOP does Christmas … pic.twitter.com/276vyjkWeE

What the people of the USA want for Christmas … pic.twitter.com/zSig0XlYX6

We’ve got some more fantastic tweets from “Amanda”‘s Advent Calendar. (Some more are below in the various animal sections too.)
(All are via Ann German.)

Day 9 of my #AdventCalendar pic.twitter.com/b1FBujKqyD

Day 10 of my #AdventCalendar pic.twitter.com/WELvYIwHbM

Day 11 of my #AdventCalendar pic.twitter.com/XC4cekyM4F

Day 12 of my #AdventCalendar pic.twitter.com/HAQhvut8oI

Day 14 of my #AdventCalendar pic.twitter.com/4RzAKh8xqo

Day 15 of my #AdventCalendar pic.twitter.com/tgIJxiSrne

Clay Bennet’s cartoons are some of the best.

This has been going on for about four years. It was initially a response to Australia sucking up to the US so much that Ameristralia was born, “… a nation purportedly overrun by racist dudebros and very deadly animals.” New Zanada, on the other hand, has “… a shared culture of mountain-climbing, apologising, and finishing sentences with “eh”.”
(Via Diana McPherson.)

Centuries ago, the fear of poisons led people to seek charmed objects to keep them safe. One example? When Europeans found fossilized shark teeth, they thought they were the tongues of dragons. These “tongue stones” were worn as charms and dipped into food to purify it of poison. pic.twitter.com/q2Cm5PL9lx

It looks like a cross between a mobility scooter and a golf cart.

Henry Ford poses on the first car he built, the Ford Quadricycle, 1896. pic.twitter.com/ofpGkisgqj

The first of Amanda’s Advent Calendar tweets I’m putting elsewhere (for site management reasons I won’t bore you with).

Day 16 of my #AdventCalendar pic.twitter.com/czTjnkVucB

I always thinks fish swarms look kinda cool. I love watching them up close – it’s amazing how they never touch each other.

A Ball of Mackerel pic.twitter.com/FbXMpb6rhK

This polar bear must like the idea of doing it on film!

But the resulting cubs are adorable!

I’ve got a feeling the hedgehog on the right doesn’t like sharing!

One of the Amanda’s Advent tweets – this one had me laughing out loud!!!

Day 7 of my #Advent Calendar pic.twitter.com/FFw5l3tNii

Day 13 of my #Advent Calendar pic.twitter.com/pUk0dKYvAX

Day 8 of my #Advent Calendar pic.twitter.com/Qo3ltAjJga

“I like cats. Always up to something.” #NoirAlley #The Postman Always Rings Twice #TCMHQ