Homily: Some Men Have An Attitude Problem (plus Tweets) 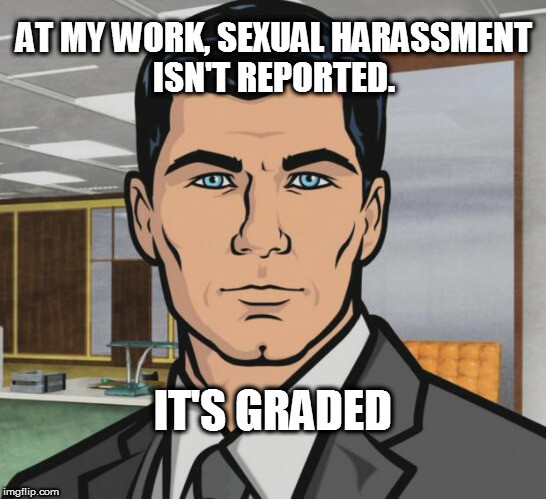 Today’s homily got its inspiration from an article reader Linda Calhoun sent me a few days ago. It’s called ‘1 in 4 men don’t think exposing themselves constitutes sexual harassment, survey finds‘. This absolutely blew me away. There are still a large number of tweets and other media about the topic of men (because it’s usually men) who are finally being exposed as predators in the media. There’s so much else going on it’s not front and centre right now, but it’s not going back into the shadows. Because of this, the idea that so many men (and women!) still think this way is shocking to me.

I knew anecdotally from discussions on other websites that there were still plenty of otherwise intelligent men who had some pretty appalling attitudes when it came to sexual harassment. Still though, I thought that it would be universally accepted that getting your dick out without it being obvious the woman wanted you to, isn’t on!

The survey of 1,000 USians began with the question, “What do you think counts as sexual harassment.” The instructions were to select all the examples that applied. In a bending-over-backwards attempt to be fair, I would say that the question is badly worded. “Harassment” is ongoing behaviour, and all the examples were written as if they were one-offs. However, they were talking about harassment, so the implication should be understood by all but the most pedantic.

Further, as the article points out, “Merriam-Webster defines sexual harassment as ‘uninvited and unwelcome verbal or physical behavior of a sexual nature especially by a person in authority toward a subordinate (such as an employee or student).'”

The survey found that 91 percent of women and 83 percent of men thought “being forced to do something sexual” fit the bill.

If that doesn’t count as sexual harassment, what does? Who are the 17 percent of men and 9 percent of women who don’t agree?

You can see the full results of the survey here, and they make interesting reading. Here’s a graphic from the survey to whet your appetite:

I find the big gap between men and women in these is concerning. Also, the fact that so many things that are clearly a form of sexual harassment, abuse, or violence aren’t considered that by so many. I would have selected every one of the above. I don’t think that’s unreasonable. Why should anyone have to put up with unwanted attention from anyone?

The State of the Union? An ill egiti mate bigot was installed in a virtual coup by a foreign dictator, and half our elected officials care more about en riching themselves and their campaigns than their Con stituti onal oath to our country.

This is what the GOP thinks of the people who vote for them.
(Via Ann German.)

Con gratu lations to GOP for main taining discipline for 6 decades as it worked to exploit #ThePoorlyEducated & expand that base to control state legis latures to gerry mander & suppress votes & win Congress.

Your donors thank you! You’ve paid back a billion times#TaxScamBill #MAGA pic.twitter.com/zPEMKJkYdl

When the news of credible allegations of paedophilia against Roy Moore broke, his Democratic opponent Doug Jones soon went ahead of him in the polls. It seems Alabama has got used to the idea of a pervert for senator, because the polls are neck and neck again.
(Via Ann German.)

Just in case any Republican ever again tries to claim passage of Obamacare was “rammed through”, here’s a comparison: pic.twitter.com/kgZz8Td1MU

We need a new category folks!

Seem this is another of those “open secrets.”
(Via Ann German.)

Video of Haim Saban thanking Jared Kushner for instructing #Flynn to call Kislyak on Dec 22nd & undermine Obama efforts on Israel at UNSC then. 1 of 2 calls that got Flynn in trouble with Mueller. Saban: “nothing illegal”. @BrookingsInst #saban17 pic.twitter.com/RfHAIxSECq

Oh dear, another thing Jared Kushner “forgot” to disclose when filling out those pesky government forms. This time it’s the Ethics Committee who weren’t told the full story. I recommend reading the short Newsweek article the link takes you to.
(Via Ann German.)

Another one he “forgot”
Damn difficult SF 86
https://t.co/Li9jlw8nhP

Harriet Litman of the New York Times has done an excellent summary of the Michael Flynn issue.
(Via Ann German.)

It sounds to me like the CIA and other intelligence agencies under the Trump administration are looking more and more like the FSB (the new name of Russia’s KGB). There are some scary quotes from Mike Pompeo (pronounced pom-pay-oh, not pop-pee-oh, if you’re reading this 1News) in the article in the link.
(Via Ann German.)

The Trump administration wants to hand over spying duties to a private company in Whitefish, MT.

Whitefish is also home to a power company with two employees that got a $300 million Trump admin contract in Puerto Rico.

Of course, these fu€kwit$ can’t help but bring their God into the situation to try and make everyone think they’re really good people. Flynn’s statement following his arrest included the words, “I recognize that the actions I acknowledged in court today were wrong, and, through my faith in God, I am working to set things right.” Unfortunately, it works on many too, especially on Trump’s Evangelical base. Most of us thankfully see it for what it is – blatant hypocrisy.

It makes what James Comey did all the more enjoyable …
(Via Ann German.)

The blatant hypocrisy of religious extremists disgusts me. This is Roy Moore’s latest effort:

.@jimmykimmel If you want to mock our Christian values, come down here to Alabama and do it man to man. #ALSen https://t.co/E7oQB9D83P

It got this response:
(Via Ann German.)

This is excellent!!!
(Via Ann German.)

Following on from the scary response to the sexual harassment survey, and the “Scary Kids Tweets” – now we have “Scary Adults Tweets.”

A comment on the times we live in. This is what happens when the most powerful man in the world embraces conspiracy theories and has people believing that top media outlets are “fake news” and fake news is real.
(Via Ann German.)

From the country that elected Trump: earth is actually flat! (Particularly in the land of Roy Moore) pic.twitter.com/5wX2VpEvsD

I’m a little traitor
Short and fat
In Russia they call me
Kom-pro-mat #flynn pic.twitter.com/2J4qoK1b2e

Someone found a pic for Donald Trump to retweet!
(Via Ann German.)

This is my most favourite thing today. #Flynn #MuellerTime pic.twitter.com/0n24obwdjm

The Optical Search for QED Vacuum Bifringence, Axions and Photon Regeneration (OSQAR) experiment at CERN searches for axions, hypothetical particles that could be a component of dark matter and explain why our universe is made of matter instead of antimatter.

The latest update from the wonderful Slimbridge Wetland Centre in Gloucestershire, England.

Oh man! What a cutie!

“This is a strange dog” pic.twitter.com/u5d1vonqpq

Feeding the hedgehogs to help them bulk up for winter.

Our hedge hog research has taken place in some very busy gardens! Before you go out foraging with friends this week end re member to tell them to fill in our #HedgehogWatch survey https://t.co/iUMGAPRMA5 pic.twitter.com/PV43787FNp

“This might be the start of something wonder ful” pic.twitter.com/gM6OYpvXHf

I wonder if they’ll make friends? Maybe they are friends, and they’re hiding their illicit relationship from the human who’s filming!

These guys were biking through a field when they saw a cow who’d got ten her head stuck in a tree and couldn’t move. At first it seemed hope less, but they were de ter mined to get her out of there ???????????????? pic.twitter.com/HRdzdkyumv

When you’ve been queueing at the bar for ten minutes and they serve someone who just walked in. pic.twitter.com/0PkcDfHHKN

I hope he put them back in the water!

The amazing expanding nest of the lang-tailed tit.

We’d all want to be rescued from there!

There are more! This account is a great find!

And we still have the amazing Gil Wizen.

The dragon-headed plant hopper (Phrictus quinque partitus) has a complex structure on its head that can only be appreciated from up close. Just in case you felt like nature can no longer surprise us. Photo graphed in Belize pic.twitter.com/KTihqhOpSm

Sometimes you just want to take your teddy bear into the pool and drift away from all your problems pic.twitter.com/6IRunxZ5DW

He’s got his thinking cat on …

“He’s got his thinking cat on.” <- initially we thought this doggo was a shaman pic.twitter.com/8T6WWT5sNY

Owner Story: “One year ago, y’all loved the squeaky fluffball my dad found while he was out for a walk. This is miss Harvey one year later” pic.twitter.com/qSzuJkVSEe

This cat has found a nice warm place for a nap!

“Cat settles in for a nap.” pic.twitter.com/ZDxozXhASU

I’ve seen this video before, but it’s so cool it’s worth posting again.
(Via Ann German.)

Contrary to popular belief, not all cats hate water. pic.twitter.com/6giYYQ0oE5

just look at it go. such strength, such power. pic.twitter.com/nDULMSa16g

Cat island in Japan.
I will live there some day. pic.twitter.com/5Rkv6XowGP