Homily: Why Are Iranians Protesting? (plus Tweets) 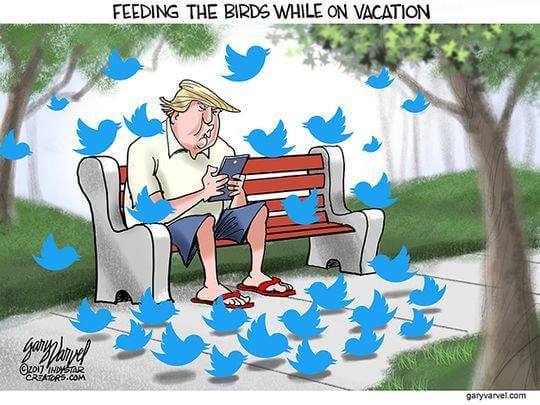 Once again the tweets of the US president expose how unfit he is for high public office. His “mine is bigger than yours” tweet (see below) to Kim Jong-un, the leader of North Korea, is schoolyard stuff.

The thing is, there were actually tweets President Trump got right yesterday. He did three in support of the protestors in Iran. But even then there were childish digs at Obama, including one that got the facts wrong. (I’ve just reproduced the good one below.) He thus made sure those who oppose him didn’t need to mention what he got right.

North Korean Leader Kim Jong Un just stated that the “Nuclear Button is on his desk at all times.” Will someone from his depleted and food starved regime please inform him that I too have a Nuclear Button, but it is a much bigger & more powerful one than his, and my Button works!

Such respect for the people of Iran as they try to take back their corrupt government. You will see great support from the United States at the appropriate time!

The far left is saying it’s better not to mention Iran. Back in 2009, during Iran’s Green Revolution, President Obama kept out of things. I remember reading a book by one of the leaders of that protest at the time, and he said it was better for the US to keep out of it too. I think that was a good call. The protestors were protesting an election and for the US to step in that time would have had the appearance of both political interference and colonialism.

This time though, it’s a different story. The revolution is much more a grass roots effort. It has no leaders and has spread organically throughout the country. It also has slightly different goals. It’s much more about principles – principles that are core values in Western democracy. That is, freedom of expression, freedom to protest, and freedom from corruption. Therefore, expressing support is the right thing to do.

So Trump right to support the protestors, despite what the far-left reflexively say. He must be careful not to go much beyond tweets though. If he is seen as trying to intervene in any way, he will undermine the efforts of the protestors. It is important for their integrity that they be seen as independent from Western influence. Frankly, Trump joining in on the side of the protestors will taint their efforts.

Another reason for the US to stay out is it’s their sanctions that are one of the main reasons the moderate President Rouhani is having difficulty reforming the country. (The other big reason is the conservative clerics.) So the US is championing a protest that is the result of problems they caused is not a good look.

The Supreme Leader of Iran, Ayatollah Ali Khamenei, complete with a coterie of well-covered women, finally spoke out yesterday. He blames it all on the country’s “enemies.” He didn’t specify who that was, but he’s referring to Saudi Arabia. Iran and Saudi Arabia are, of course, in a proxy war in Yemen at the moment. What he should do is announce he will sit down with Rouhani and negotiate a reduction in financial support for religion.

President Rouhani has done some good since taking over the country. One of the things he has done is to make government expenditure more transparent. He wants to spend more on things like infrastructure, but the clerics, especially the conservative ones, want no reduction in the billions they get from government. Opening up the books means that the people now know just how much the clerics are getting, and with unemployment as high as 60% in some areas, they’re not happy.

To a slightly lesser extent, the people are also unhappy with how much the war in Yemen is costing. However, many see that as necessary expenditure. Standing up to the regional dominance of Saudi Arabia is still important to them.

How these protests will play out is anyone’s guess. I certainly don’t feel up to predicting what will happen. In the meantime, people have died and many more are suffering, so I hope a peaceful resolution can be found soon.

This video is almost eleven minutes long, but includes a pretty good discussion of the issues.

Why isn’t this big news?
(Via Ann German.)

If one of those missed by a similar margin, and hit a major Japanese city, it could be misconstrued as an attack, sparking all-out nuclear war

This is a really big deal, and really bad

We now know Mitch McConnell is officially “disturbed.” This is an official gif!!!
(Via Ann German.)

This is one of the responses!

I had to double, no triple check this was his official account and not a parody. Wow. Your country’s run by madmen. ????
Please accept this virtual hug of condolences from me.

There’s a lot that could he added to the lower pic, including abortion.

THERE.
NEVER.
WAS.
ANY.
VOTER.
FRAUD.

This is a problem too. As always, the extremists take control when times get tough. That’s what happened to the Republicans. However, it has to be said that some things that are called “far left” in the US are normal elsewhere, like universal healthcare and paid maternity leave.

Hi kids. My name’s Keith, the chair of the DNC. After the 2016 election, it was obvious that things had to change. That’s why my buddy Tom & I decided to turn the Democratic Party into an extremist organization for far left ideologues. And remember: I’m with Zir!

Where are the voices of all the leaders who know an independent Department of Justice and FBI are essential to our liberty? “You are not only responsible for what you say, but also for what you do not say.” — Martin Luther

You may have seen images of a young girl in videos of the protests in Iran who tied her white hijab to a stick in protest. (You can see it at Why Evolution is True.) She has apparently disappeared. These women won’t let her be forgotten.

The unveiled girl waving a white shawl on a plinth last week was protesting compulsory veil. No-one know what has become of her. As a sign of solidarity, we urge all women to remove their white shawls and come out in the streets like her. #WhiteWednesdays #چهارشنبه_های_سفید ید pic.twitter.com/zFz3CJrZEI

On our WhiteWednesdays, protest we come to the streets unveiled to exercise our right to protest in the most peaceful way possible. This time, we are doing so in solidarity with the unveiled girl waving a white shawl while on a plinth on Enghelab Avenue. pic.twitter.com/rDsyKgcHps

Another brave woman in Iran.

Female protester to older Iranians: “You raised your fists and ruined our lives [referring to the 1979 Islamic revolution]. Now we raise our fists [to fix your mistake]. Be men, join us. I as a woman will stand in front and protect you. Come represent your country.”#IranProtests pic.twitter.com/y9MjkaRqac

This is very cool!
(Via Ann German.)

Some lovely old buildings in the capital of Latvia.

Here’s my @nytimes report on a big story in ancient DNA news: an 11.500-year-old Alaskan girl belongs to a vanished people, and reveals a lot about how Native Americans came from Asia. https://t.co/n42bub5zyr pic.twitter.com/NedhUEQfc5

My new name for the Insect Tweets section, since I include stuff like spiders that aren’t insects, and I don’t know enough to class all the different creatures. Here’s a gorgeous one to start with.

Very interesting update from Slimbridge this month. Lots of birds and otters!

Yes, Linda Calhoun, kids are cute. Even if they do grow into smelly billy goats. 🙂
(Via Ann German.)

Don’t mess with the bear!
(Via Ann German.)

“I’d like to add you to my professional network on LinkedIn.” pic.twitter.com/qjQzZKtLRP

“I’d like to add you to my professional network on LinkedIn.” pic.twitter.com/9AteD83PQV

“I’d like to add you to my professional network on LinkedIn.” pic.twitter.com/rEZtjpic2u

When this family found a puppy in the snow and brought him home, the other dogs weren’t thrilled. But now they have the most gorgeous adventures in Alaska every day ????❄️ ???? pic.twitter.com/crwNigIn4r

This pregnant dog was stuck underneath a sidewalk after someone trapped her there — so this guy broke it apart to save her ???? pic.twitter.com/lKN261vkks

Touching moment. The puppy rescued from the structure, the fireman took out the oxygen mask to give him a wet. Thanks, human! ????❤????‍????????????????#saveanimals pic.twitter.com/qbrnhubzgZ

What a brilliant pic!
(Via Ann German.)

Nothing happening here. Move along. It want’s to be licked. Really.

This cat has its staff well trained!!!

Cats are best for dogs too.