Homily: Bad Laws in Russia and Pakistan (plus Tweets) 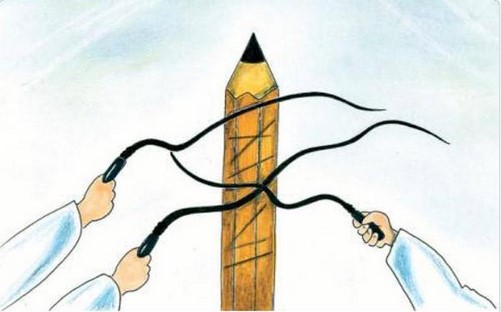 I prepared the tweets for this post yesterday, but then the efforts of the previous few days overcame me. Translation: I spent the remaining three hours of the afternoon asleep! I haven’t looked at Twitter yet today, so some of the tweets may be out of date. However, New Zealand shuts down for three weeks over the Christmas/New Year period and you can’t expect me to break the habits of a lifetime! 😀

There were a couple of nasties in my news notifications this morning though. The first was from the Moscow Times. You may remember me writing about the efforts of the Russian Communist Party to align themselves closely with the Orthodox Church there. Russia likes to present itself as the last bastion of white Christian values, and to them that means opposing liberal democracy, humanism, “too much equality” for women and minorities, and political correctness in general.

The latest example of this is even more sickening than most. At least human beings can understand why they’re suffering abuse in one form or another. Now a law opposing cruelty to animals has been sent back to the Duma following Communist Party member Stepan Zhiryakov speaking against it.

A Russian senator has warned of the slippery slope that legislators risked taking by passing a law against animal cruelty.

The Federation Council struck down a bill on Tuesday that sought to ban cruelty against animals used in the training of hunting dogs and birds. …

“We’re not only passing a law that won’t work for many reasons, but we’re also demonstrating that we’re following the same path, so to speak, of defending the rights of sexual minorities.”

Stepan Zhiryakov, the vice-chairman of the Agrarian Committee, retorted that dogs “should not be equated to sexual minorities.

The other dreadfulness comes from Dawn, a liberal Pakistani newspaper. They report that last year’s Prevention of Electronic Crimes Act (PECA) has had some amendments. Blasphemy and pornography are now part of the act too.

Blasphemy, of course, should not even be a crime. It is a matter of extreme embarrassment to me that my country still has a blasphemy law. In so many ways we lead the world when it comes to human rights and similar matters, but I consider our blasphemy law a bad stain on our reputation. (I’ve written about that too several times, especially here.)

Pakistan is a fairly modern democracy, but a Muslim council has a strong influence over the laws of the country. Oftentimes parliament will try to pass good laws, such as forbidding child marriage, only for the Muslim council to overrule their efforts. I don’t know if they’re the ones that are insisting pornography and blasphemy be part of PECA, but it wouldn’t surprise me.

What’s the bet bank fees in the US don’t go down, interest rates don’t go up, staff salaries don’t go up any more than they normally would in the circumstances, and executive bonuses do go up a lot?
(Via Ann German.)

This is how much the big banks WON’T pay in taxes next year thanks to the #GOPTaxScam:
Goldman Sachs $1 billion
Bank of America $3.5 billion
Citigroup $1.4 billion
JP Morgan $3.3 billion
Morgan Stanley $833 million
Wells Fargo $3.7 billion
PNC $704 million
US Bancorp $766 million

This is a revolting story. The man has no dignity.
(Via Ann German.)

I saw this retweet from @mykecole and thought it had to be some Duffel Blog type thing. Sadly, no. https://t.co/1UYKzkbtWy

Here’s what the presidential coin looks like in Trump’s “reign”. He’s politicized it as well as making it look tacky, and it will be used on occasions it never was before (check link in above tweet.)

President Trump had a “personal hand” in designing the new presidential coin, believe it or not. https://t.co/NIJOU9UN0B pic.twitter.com/pZzyuCpgeb

Every now and then I’m going to include a tweet or two proving Trump doesn’t think clearly. Here’s an example of him inventing a conspiracy.

I just counted. Donald Trump sent one hundred (100!) panicked tweets about Africans invading America to infect us with Ebola in 2014. pic.twitter.com/DzpkQm0DxS

And more evidence of his ignorance and prejudice informing US policy, instead of facts. But then “fact-based” is a forbidden term.

In Oval Office meeting, Trump raged about immigrants coming into the country, according to officials. Haitians? They “all have AIDS,” he snapped. Nigerians? After seeing America, they won’t want to “go back to their huts.” @shearm @juliehdavis https://t.co/GikyOn8MoL

Of course, Trump isn’t the only one who’s deluded! This is un-effing-believable!
(Via Ann German.)

EXCLUSIVE: Steve Bannon is fed up with Trump—and has privately said he would consider running for president, himself, in 2020 https://t.co/inLHzQIZk2

This is a good response to the above!
(Via Ann German.)

As Icarus soared on waxen wings
Bannon flies now to the sun
His porcine bulk will plunge to Earth
But 2020 will be sooo fun. https://t.co/aAN4IRdLnb

I’ll have no problem filling this new section.

It never went away. Here are the receipts. pic.twitter.com/mNugb3Nt88

NYT: “The layoffs have stunned these steelworkers who, just a year ago, greeted Trump’s election as a new dawn for their industry… Trump pledged to protect factories from unfair imports and revive industry, especially steel.” https://t.co/nqaVjqE7vU @AnaSwanson

This could be interesting.
(Via Ann German.)

Federal prosecutors in New York are examining a $285 million loan that Deutsche Bank made one month before election day last year to the real-estate company run by Jared Kushner https://t.co/2hxWx72C0Q

So now in Ohio you can have an abortion unless your baby has, or even may have, Downs Syndrome! FFS. This is outrageous.
(Via Ann German.)

Ohio Gov. John Kasich has signed a bill that prohibits women from having abortions if tests reveal that a fetus has or may have Down syndrome https://t.co/NiAG9KpbZw pic.twitter.com/WQ72rdfRUW

Women do not have equal rights in the US Constitution. Some of the HuffPost article is a bit OTT (as almost always with HuffPost), but it doesn’t change the important fact. The US has yet to pass the Equal Rights Amendment to its constitution, first proposed in 1923.
(Via Ann German.)

96% of Americans think the Equal Rights Amendment (ERA) has passed. It has not. #ratifyERA #Renato4AGhttps://t.co/lEWJsnNMBS

What is happening in the country that likes to tout itself as a human rights beacon to the world?
(Via Ann German.)

The agents carrying out these orders are just as complicit as their masters. They can’t hide behind the “I was just following orders” excuse when their day of judgment comes. They must be held accountable for their actions.

What a fantastic young woman! I’m surprised she was surprised by the level of misogyny and street harassment in Palestine though. I wonder if that comes from the romanticisation (Is that a word? It is now!) of the Palestinians in relation to their conflict with Israel on US campuses.

This Palestinian-American is fighting sexual harassment with fashion. pic.twitter.com/d36Nf2Jnt9

Here are the last of the series in Amanda’s Advent Calendar.
(Via Ann German..)

Day 17 of my #AdventCalendar pic.twitter.com/k84XMxNlGs

Day 18 of my #AdventCalendar pic.twitter.com/ZkwP4Jm446

Day 19 of my #AdventCalendar pic.twitter.com/Tq3XJOxCzD

Day 20 of my #AdventCalendar pic.twitter.com/CFrTIXyB2Q

Day 21 of my #AdventCalendar pic.twitter.com/Dc0PSm8ATS

Day 22 of my #AdventCalendar pic.twitter.com/Edi5qeMJCy

Day 23 of my #AdventCalendar pic.twitter.com/lblg5ciyQZ

Day 24 of my #AdventCalendar pic.twitter.com/uIFnnfo6yb

I have heard of these, but I thought I was going to get through life without being subjected to seeing them! That hope is now gone, so you all get to see them too!
(Via Ann German.)

There is no reason for these to exist. pic.twitter.com/0hMKpYamgX

Plague still occurs in the US. It’s unknown in countries with a universal health system like New Zealand, Australia, Canada, Great Britain, Japan, South Korea, and all of Europe.
(Via Ann German.)

Rats dancing at the time of the plague. Oil on canvas by an unknown Flemish artist, 17th century pic.twitter.com/nOwckb97HA

Here’s a story you won’t want to miss (sarcasm alert!). Her cat scratched her on her hand, but a couple of the scratches formed a Christian cross. Voila! Proof God is real!

FFS! – Christian Says Cat’s Scratches Must Be a Sign from God – Friendly Atheist https://t.co/Zxo55eCzHe via @hemantmehta

I think I’ve put this one in before, but it’s a good one.

What is Symmetry in Physics?
With Particle Physicist Tara Shears #Saturday_Night_Science #Science
– https://t.co/8FJIrJgIxN

In perspective Neutron star with a mass of 500,000 earths has a diameter no larger than that of New York pic.twitter.com/Jo4EbpQoqt

I haven’t been doing enough “Scenic Tweets” lately. Here’s a nice one from Spain.

The pika looks just like a bunny that’s evolved for a cold climate.

Hungry hedgehog getting stuck into the cat food!

“fuck that for another year” pic.twitter.com/m2cb0lf1oU

Good news, and what a lovely critter!
(Via Ann German.)

Our knowledge of the blue-and-white clearwing moth that pretends to be a bee was limited to one damaged museum specimen from 1887. No one has reported a live one since. Until now https://t.co/JZggohi4sy

We all know people who sound like that walrus when they’re sleeping! (Or maybe you’re one of them!)

Now that would be a great experience! Look at all those baby kakapo!

Merry Christmas everyone! A memory from the 2016 #kakapo breeding season to add cheer to your day. Thanks to everyone who’s supported #kakapo and #takahe this year. Video: @deidre_vercoe. pic.twitter.com/GEyg J8sGJa

Want to spread a little holiday cheer? Google Barred owls “laughing.” These birds (Strix varia) have multiple calls, including a hoot that resembles a loud guffaw, and an 8 to 9-note call that’s been described as sounding like, “Who cooks for you? Who cooks for you all?” pic.twitter.com/JQJgF OSeBQ

This one is especially for my sister Brenda, who’s a big fan of corgis.

These dogs LOVE their little sister — and now they have a new brother to love too ???? pic.twitter.com/Ejkd 13blq0

I want to hug it!

Some wonderful news from 2017. (This tweet is part of a thread that has several other good news stories in it, so it;s worth going to the tweet itself if you can.)
(Via Ann German.)

The snow leopard has been taken off the endangered species list. pic.twitter.com/nryfZ7EN45

What a cool kitten!
(Via Ann German.)

Interspecies friendship of the day. pic.twitter.com/BrryizjLAt

I can’t stop watching this one! And what gorgeous animals!
(Via Ann German.)

This cat: The Boss! What a brilliant pic!
(Via Ann German.)

I’m sure I’ve posted this before, but you can’t have too many kittens!
(Via Ann German.)

If the Master* regenerated as a cat, he’d look like this!
(* Dr Who reference.)