Homily: Alabama and the GOP’s Future (plus Tweets) 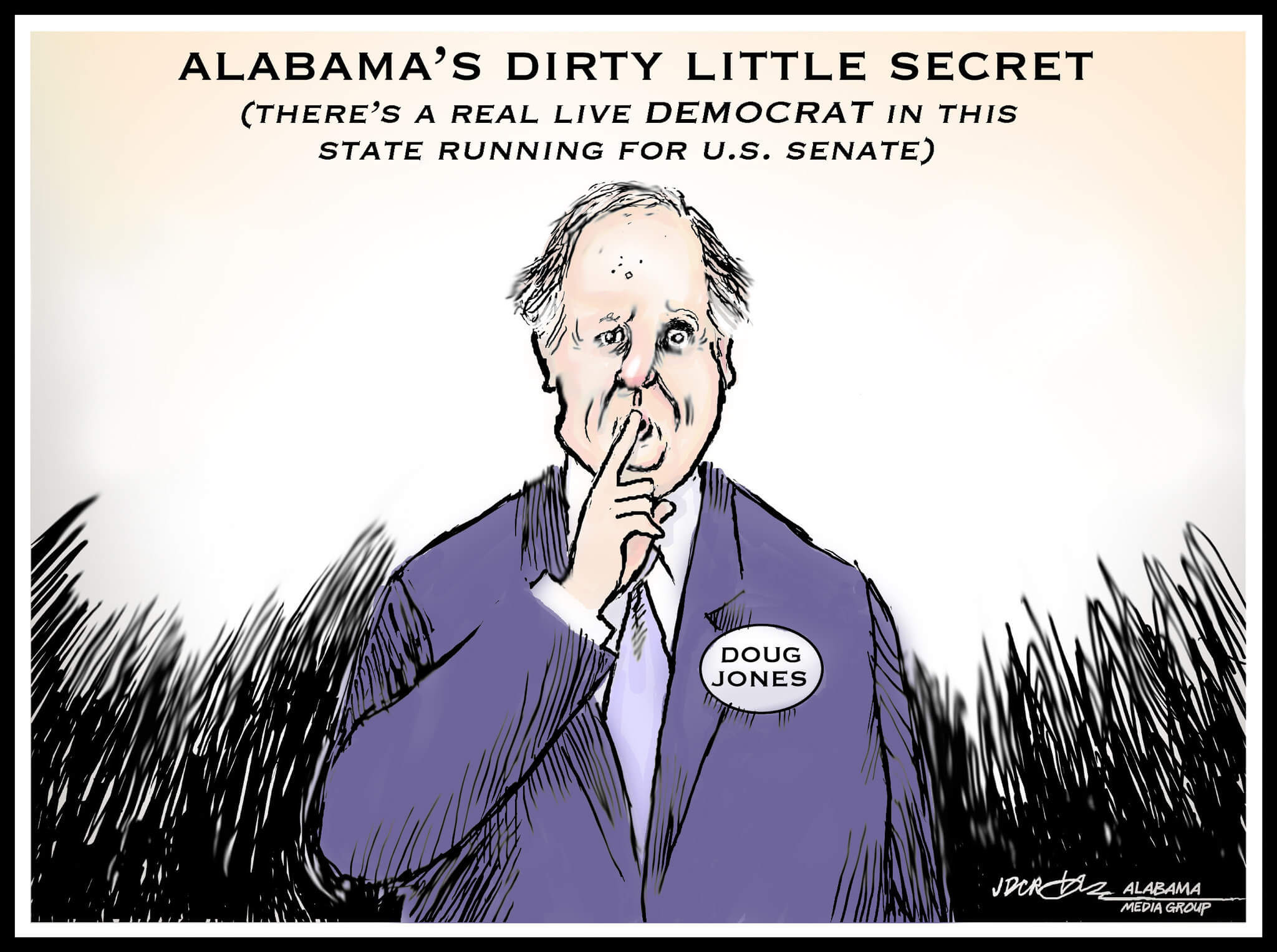 It’s been almost a week since I did a tweets post, so you may have been wondering where I was. Mostly, I’ve been out of town at medical appointments. For obvious reasons, I don’t announce when I’m leaving town on the internet ahead of time! When I got back, it took me a couple of days to recover. Anyway, I’m pretty much back to normal now. (Well, normal for me.) So normal service will resume!

I got back on Alabama’s election day. It was about 8pm Alabama time when I turned on CNN and within about thirty minutes it was exciting to realize I was going to be proven wrong. Although Doug Jones was still behind at that point, it was pretty clear to me that the results that were in were from counties that support Roy Moore. The outstanding results were from the high population area, and all those were going strongly Democratic.

As always, there were a lot of factors contributing to a Jones win. Turnout was very high – around 40% – which was double what was expected. A lot of that extra turnout was amongst black voters. Apparently more blacks cast a vote for Doug Jones this week than for Barack Obama in 2012!

Alabama is a state that makes it harder than just about any other for those that are more likely to vote for a Democratic candidate to vote. (Read the article at the link – you’ll find it shocking the lengths Republicans in Alabama go to in order to suppress the black vote.) Despite this, or maybe because of it, there was a huge black voter turnout. Blacks voted almost exclusively for Jones (98% of women and 93% of men). Black women in particular, who were twice as likely to vote as black men, were a big help to Jones.

There was one more thing that was the tipping point though. On Sunday, the other Alabama senator, Richard Shelby, said he couldn’t vote for Roy Moore in good conscience. He made an announcement on national television that he would write in a candidate rather than cast a vote for Moore. He was putting #CountryBeforeParty. In total, 1.7% of voters did that. If those voters had given their vote to Moore instead, he would be the new senator.

Despite all the flaws in Roy Moore as a candidate, he came very close to winning in Alabama. With a better candidate, it is likely the GOP will take the seat back in 2020 no matter how well Jones performs.

However, there is a lesson Democrats in deep-Red states should learn from this election. There is a tendency in such states for Democrats to not bother voting because they are so sure the Republicans will win. But the values of the Republican party are actually not those of the country as a whole anymore. There has been a change in recent years. A majority now support things like marriage equality, Obamacare, and even women being able to choose whether they have an abortion or not.

The US saw the change recently in Virginia where, for example, a transgender woman took the seat of the man who promoted a “bathroom” Bill. Emily’s List used to support just a few hundred women. Now it’s thousands.

Further, young people are getting involved much more than in the past and they overwhelmingly support the Democratic party. As well as the reasons above, their better record on the environment is a big reason for this. The GOP is the only major political party in the world that denies man-made climate change. Young USians, in contrast, mostly accept the reality of science.

It’s a truism that people get more conservative as they age, but they do not get stupid. They generally retain their principles too. The GOP’s supporters are dying off. They have the reputation as being only for old, rich, white, men for a reason. In the future, there just won’t be enough of them to win elections.

Some interesting data on the Alabama special election.
(Via Ann German.)

Can you see what’s happened? 😀
(Via Ann German.)

It’s weird how every week brings another story of a humongous, supposedly secure company getting hacked, but everyone considers the idea of voting machines being tampered with foil hat stuff.

On Fox News yesterday they were complaining about the amount of negative news re Trump. It was a result of an analysis by a right-wing media organisation(the name of which I forget). BUT WTF DO THEY EXPECT! There is too much from Trump that IS negative. This tweet …

Very little discussion of all the purposely false and defamatory stories put out this week by the Fake News Media. They are out of control – correct reporting means nothing to them. Major lies written, then forced to be withdrawn after they are exposed…a stain on America!

Got this response …
(Via Ann German.)

Oh, and by the way, Fox News had to apologize this week for an error. They wrongly accused a Moore accusers of forging his name in her school yearbook.

A lot of women will be able to identify with Lucinda Franks, who wrote the article in the link. I know I can.
(Via Ann German.)

This is extremely concerning.
(Via Ann German.)

I resigned from the U.S. Department of State yesterday. This article explains why. #StateDepartment #ForeignPolicy https://t.co/yspUPUULl6

CNN and the New York Times are reporting that Trump’s daily security briefings are deliberately structured to avoid talking about the Russia situation. The reason? It sends Trump off track and they can no longer reason with him.

What a ghastly woman!

This woman ranted at fellow Starbucks patrons for not speaking English. pic.twitter.com/LugYWjbG2L

Quinnipiac University is a respected pollster. This result means that there is bi-partisan support for an investigation.

BREAKING: 70% of Americans want Congress to investigate @realDonaldTrump for sexual harassment, according to @QuinnipiacPoll. Democrats are working to get an Oversight Committee investigation into the many allegations – retweet if you’re with us!

Makes you think.
(Via Ann German.)

Wow! There are some very disturbed people out there.

Only in Japan! The Bing translation isn’t much help:

This is a white house press release about eliminating redundancy.
The blue part.
Where is my bong… pic.twitter.com/njvbUn37bg

The first Star Wars movie came out when I was thirteen. I knew the dialogue off-by-heart. I’ve been a fan ever since! The latest movie premiered in New Zealand yesterday, but I won’t see it before it comes out on video.

Here are 5 things to know about Kelly Marie Tran, the breakout star of Star Wars: The Last Jedi. pic.twitter.com/vJ0ppQfkYK

I didn’t know he ever wore a uniform!

On the set of Batman (1966) pic.twitter.com/PEuD6XHtkb

I actually remember is being recommended to women to use the hula hoop while doing the housework to maintain their figures!
(Via Ann German.)

Very interesting. (Well, I think so anyway, and it’s my website.)

A canal in Venice being drained and cleaned, 1956. pic.twitter.com/jwFzKbxrgz

What a gorgeous setting!

A serene winter scene reflecting in the waters of Loch Leven in the Scottish Highlands#EarthCapture by @PaulKingstonNNP pic.twitter.com/vXHFvkPWg4

Could this asteroid actually be an alien spacecraft? pic.twitter.com/nn112gnqr4

I don’t know Sean Carroll, but I know I like him! 😀

I hope nobody is surprised that a rock flying through the Solar System shows no signs of being constructed by an alien civilization.

(Though are we sure we know what those signs would be?)https://t.co/d1GFNAmLNk

I think stingrays are beautiful.

Pareidolia! (There’s a study that says you’re neurotic if you see faces in things, but I think that’s ridiculous. Now if you started believing the faces were real, that would be a different story!)
(Via Ann German.)

This is sad news for New Zealand!

BREAKING: 44 dolphins were caught in fishing nets in the Bay of Plenty in the last year, most of them were killed. https://t.co/GQ7zWeGMX3 pic.twitter.com/2lifIFz7vI

These are protected marine mammals. For so many to be caught in one year, in one region, is completely unacceptable

A spectacular fan-throated lizard basking in the sun. Photo by Hemant Kumar pic.twitter.com/FhhlPEZTk3

I wonder what they were doing with it?

What’s the bet this was a religious thing?!

Make sure he’s got a firm grip on his snake before you put your lips anywhere near it. pic.twitter.com/khIbssGDiq

Actually, I find this a bit scary.

A cool video from the Norfolk Wildlife Trust about the county’s woodlands.

How to get a girlfriend when you’re an Arctic Squirrel.

This looks very cool. I wish I could go.

New Zealand Geographic Photographer of the Year 2017 is on now at Auckland Museum until 25 Feb. #NZGeoPhoto pic.twitter.com/D8LBspjDPQ

This elephant was trapped in mud for 12 hours — and is about to be rescued. (via @caters_news) pic.twitter.com/UOEtndb51k

Very cool, and what a gorgeous bird!

“Its intelligence commands respect, and its helplessness, sympathy; while its genial nature endears it to all who know it well.” ‘Animals of NZ’, Hutton & Drummond, 1909. Love reading old accounts of #kakapo. pic.twitter.com/UuNQvss9Ml

What a cool birthday gift!

As Ann German commented when she sent me this, “Lovely.”

The call of an orange fronted fruit dove is a distinctive, soft ‘hoo’ and they can be recognized by their bright orange foreheads. pic.twitter.com/PObrBMsPR9

The reclusive rock wren/tuke is on the rise in Kahurangi National Park thanks to our predator control programme https://t.co/wPLWLtRxsE pic.twitter.com/65jBE8A38N

This is especially for my sister Brenda, who very kindly had me to stay earlier this week.

“Corgi Wrap. The little “arf” at the end just melts my heart” pic.twitter.com/5kND7Mb1KB

Brilliant! This will make you laugh!

This hero firefighter gave CPR to a dog — and saved his life! pic.twitter.com/WzH5QOgQYh

And another one to make you laugh!

BEWARE OF THE DOG.
(You might trip over him) pic.twitter.com/myvV7gXyn3

This kid’s parents are starting it out right!

A film festival to look forward to!

Call for entries! Submit your film for the Int’l #BigCats Film Festival by 31 December! Winners will be announced on 2 March at @UN Head quarters to celebrate #WorldWildlifeDay 2018 https://t.co/jC5q2IriCQ #WWD 2018 #Predators Under Threat @wildlife day pic.twitter.com/Q9NGVT9Ntj

A note to end on?

.@GoPro, whose #GoProForACause produced the film on Muli and her species, is joining our 2nd Annual Million Dollar Act for Big Cats Challenge! Loyal Panthera donors are putting $500,000 on the line to inspire you to #actforcats this holiday season More: https://t.co/1yjLVTwarL. pic.twitter.com/yTKFjCkayd