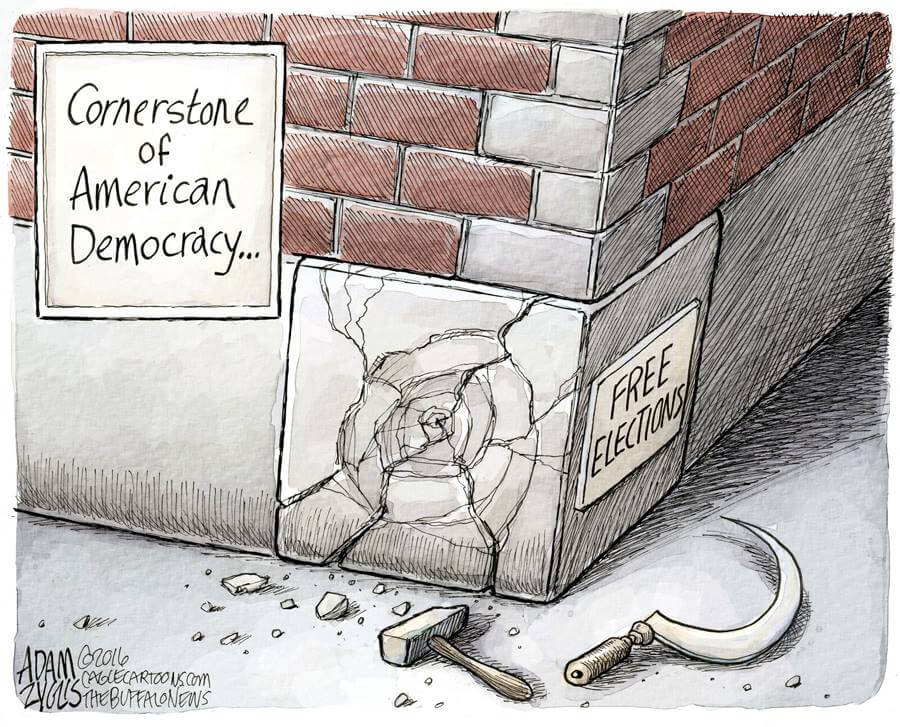 Any time you look at Twitter, there are multiple tweets about politics. Most of them take a strong partisan stance. Whenever I tweet about politics, I take a side too. It’s the same the world over.

However, I notice that in the US there seems to be a much greater level of vitriol in the tweets. Most countries have people on the extremes, whether right or left, but the US appears to have more of them.

It’s worse now that it’s ever been, and so, of course, the current president gets a lot of the blame. And actually he should. He does almost nothing to try and bring his country together, and goes out of his way to divide.

But it didn’t start with Donald Trump. He’s just the result of a trend that’s been getting steadily worse since 1999.

Personally, I blame the US electoral system. USians are told from the time they’re in nappies, or “diapers” as they would say, that they’re the greatest democracy the world has ever known. That the founding fathers gave them a great system with checks and balances to make sure everything is fair.

The problem is, it’s not fair.

This is something I will write about in a proper post as there’s a lot to go into, but the basic problems are obvious.

The system itself allows gerrymandering, which is an affront to democracy.

If you support a party other than one of the two major parties, there’s no hope you’ll get representation at the federal level.

Most states give all their Electoral College votes to whichever party gets the majority of the votes. All those who didn’t vote for the majority party have no federal representation from the political party they prefer.

There’s a lot more than that too. If those were the only problems though, I don’t think the hatred we see for people who support a different party would be so strong. This system has always been fundamentally unfair, but the intensity wasn’t always like it is now.

I think the problem started in 1999 when George W Bush became president despite Al Gore getting more votes. Even that might not have been so bad if it wasn’t for the voting irregularities in Florida.

What that meant was that everyone knew Gore should have been president, but Bush got the job. So Democrats felt cheated and Republicans felt the constant need to justify themselves. Bush then proceeded to take the country into an unpopular war, making everything worse.

Then Obama was elected in 2008. There was no doubt about his win, but there was a lot of the country that just wasn’t ready for a Black president. The racist underbelly was exposed, and it wasn’t pretty. The most prominent opposition was the Birther campaign, led by Trump, but there was a lot more. Membership in white supremacist groups like the KKK increased, for example.

After eight years of Obama, there was an election where the Republican won the presidency, but his Democratic opponent got three million more votes than he did. On top of the fact that the Democratic candidate got by far the most votes is the fact that there was a campaign by a foreign government to influence voters in key states who to vote for. There’s a strong feeling that the election wasn’t valid. It’s the 1999 situation again, but much worse.

A different president might have been able to bring the country together. But if you created a virtual president who’s every action would increase the divide, it would be all but identical to Donald Trump.

Something to think about if you’re a USian.

‘America is a myth and the United States is on stolen land.’ pic.twitter.com/gAE1hhktsN

In the US, the neutrality of the internet is under threat. I consider this part of Donald Trump’s pathetic efforts to undo everything that Obama did. With this the Republican party are moving into an area that goes against everything they supposedly stand for – freedom and lack of government intervention.

This senator explained why net neutrality is so important — and every American needs to hear it pic.twitter.com/ZYffZTJc1c

He’s not improving. As Ann German noted when she sent me this, “Sounds like the first draft of a Dr. Seuss sequel to Horton Hears the Who.”

I’ve read this at least a dozen times. This is part of what Trump just told the Coast Guard. https://t.co/rHGhD5E1V5 pic.twitter.com/GlMMYmATfL

Here’s the video.
(Via Ann German.)

The commander in chief thinks the F-35 is invisible like Wonder Woman’s plane. ????‍♂️pic.twitter.com/Ynf2BPUwRN

Turns out, soccer has a lot to do with politics, especially in Spain. pic.twitter.com/2LTc8DKDLE

Another aspect of the investigation. Trump is definitely guilty here – whether what he did was illegal, on the other hand, Mueller will decide.
(Via Ann German.)

Remember when Trump disclosed highly sensitive classified intel to Russian envoys Sergey Kislyak and Sergey Lavrov back in May?

Michael Flynn is going to be one of the biggest problems in this whole debacle.
(Via Ann German.)

Flynn’s lobbying partner Bijan Kian, now under scrutiny by Mueller, hired a journalist to help produce a pro-Turkey documentary last year and then swore him to secrecy: “We don’t want anyone to know the Flynn Intel Group has anything to do with this.” https://t.co/43PM8Q75zG

Here we go again. Exceptionalism in the good ole USA. WTF is wrong with these people? These ads would be illegal in places that so many in the US like to look down on like New Zealand and the European Union.
(Via Ann German.)

Last week, ProPublica bought dozens of rental housing ads on Facebook, but asked that *they not be shown to* certain categories of users such as:
-African Americans
-people interested in wheelchair ramps
-Jews

The Roy Moore story isn’t going away – we’ve still got about three weeks until the election. This pastor thinks he made it better. He actually made it worse. It just shows how screwed up conservative religion makes people when it comes to relationships.
(Via Ann German.)

So younger the girls have greater purity? Reductio ad absurdism. So dating an 8 year old means she’s more pure, how about a 5 year old? That argument is an argument for child pornography. Stupid isn’t a factor in this, but pedophilia is and it’s outrageous. Reduced to ridicule!

As Ann German pointed out when she sent me this tweets, there’s no mention of gay priests molesting children either.

I’m not sure if this really is recent – I feel like I’ve seen it before. However, either way, it’s Very Cool!
(Via Ann German.)

This woman making the best out of today’s floods in Jeddah ????‍♀️, #Saudi pic.twitter.com/9KsnblKfXe

This is cool! I want some!

I’ve never seen cranberry sauce for sale in New Zealand, though we do have cranberry juice. I’d like to try it.

Here’s why cranberry sauce was on your Thanksgiving table tonight pic.twitter.com/e0tyr1E8UQ

I’d like her recipe for Mac ‘n’ Cheese. Looks and sounds delicious. It’s weird to me that being queer makes a difference, but perhaps it still does in the US. Maybe it means she’s allowed to get away with all that cultural appropriation! 😀 (Sarcasm alert.)

I’m a day late with this because of time zones, but I was a big fan of Marie Curie as a kid so I wanted to honour her.
(Via Ann German.)

Celebrating the 150th anniversary of the birth of Marie Curie, an exceptional scientist #CNRSnews https://t.co/in7lQZ4GK4 pic.twitter.com/iDfQChpYzN

A gift for someone who has everything:

Bizarre what we humans do to one another that meant this pic happened.

Now that’s a sign! I’d love to see that up somewhere!

I think I’ve put the tardigrade in before, but not any of these tweets.
(Via Ann German.)

Is it just me, or does the Tardigrade (from the neck down) resemble Miyazaki’s “Cat Bus” in his Totoro film. pic.twitter.com/43feE1E9GL

Oh, tardigrades are much, much cuter. My former student @RuthlessRuth15 created this video with some tardigrades in our lab. https://t.co/G5ScKkhl5f @univpugetsound @ASMicrobiology

How cool is this?! A black dormouse!

We caught Tutoko tonight, and cloacitis virtually healed. So all #kakapo on WH are crusty bum-free! #conservation pic.twitter.com/h4KoPrBVc4

What a cool looking creature!

These two will be friends for life!

Though this is a movie, anyone who’s owned a Labrador knows this is just what they’re like in reality. Our Labrador saved my life once. He also saved the life of a kitten we had by coming to get us when it got into difficulties. They’re wonderful dogs.

This cheetah cub is adorable!

Poor pussy! It’s body armour prevents it being a cat!

A new game to play with the cat!

Where have your fingers been? 😀

Chewing on Mum’s tail! That’s what it’s for, surely!

There can never be too many cat tweets!

Check out her lovely eyes!