Recently, European reader and science communicator Amy Carparelli came across an article entitled Burka Vs Bikini – The Debauchery Of American Womanhood by Henry Makow (PhD). Makow’s conclusions about why women wear bikinis are incredibly simplistic. An example of his writing:

I am not an expert on the condition of Muslim women and I love feminine beauty too much to advocate the burka here. But I am defending some of the values that the burka represents for me.

For me, the burka represents a woman’s consecration to her husband and family. Only they see her.

It affirms the privacy, exclusivity and importance of the domestic sphere.

The Muslim woman’s focus is her home, the “nest” where her children are born and reared. She is the “home” maker, the taproot that sustains the spiritual life of the family, nurturing and training her children, providing refuge and support to her husband.

In contrast, the bikinied American beauty queen struts practically naked in front of millions on TV. A feminist, she belongs to herself. In practice, paradoxically, she is public property. She belongs to no one and everyone. She shops her body to the highest bidder. She is auctioning herself all of the time.

After a whole lot more of this nauseating and misogynistic drivel, he concludes:

This is especially destructive for woman. Her sexual attraction is a function of her fertility. As fertility declines, so does her sex appeal. If a woman devotes her prime years to becoming “independent,” she is not likely to find a permanent mate.

Her long-term personal fulfillment and happiness lies in making marriage and family her first priority.

Feminism is another cruel New World Order hoax that has debauched American women and despoiled Western civilization. It has ruined millions of lives and represents a lethal threat to Islam.

I am not advocating the burka but rather some of the values that it represents, specifically a woman’s consecration to her future husband and family, and the modesty and dignity this entails.

The burka and the bikini represent two extremes. The answer lies somewhere in the middle. 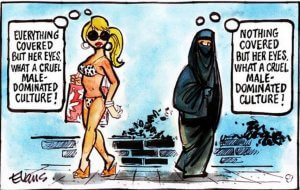 Bikini vs Burqa
by Amy Carparelli

I wasn’t sure whether I should write this article because I think the bikini and the burqa are in many ways too disparate to be compared. Obviously they are both items of clothing, but they are worn for very different reasons. I decided not to respond to the many sexist statements made by the person who wrote the original blog. The things stated are very much what I would call slavery. I would hope that any decent parent anywhere in the world would raise daughters equally to sons, and encourage daughters to achieve what they want to achieve and not allow themselves to be used in the way the person who wrote the blog believes women should be treated. Religion and culture are no excuse to go against human rights and equal rights’

I will begin with when, where and why I wear a bikini. I sometimes wear a bikini on the beach when the weather is hot and humid, or at a least warm and sunny. I have occasionally worn a bikini on hot and humid days when at home, popping out to the local shops to buy a few items, visiting family and friends, and, on rare occasions when high-street shopping for clothes. I have worn a bikini taking part in some sports. Under these circumstances I would wear a bikini top with denim shorts, jeans, or a skirt and only if I was already wearing a bikini because of the weather and depending on whatever else I am planning on doing that day. With these examples there is a common theme – the weather and being comfortable.

Something I have noticed with some blogs and other articles on this subject is that the image shown is usually of a woman wearing a bikini taking part in a beauty pageant. I think beauty pageants are a different debate. I personally don’t have an issue with these competitions as long as it is consenting adults taking part in them. I do not agree with children taking part in beauty competitions. I am not claiming to be an expert on beauty pageants, but from my understanding contestants wear different outfits throughout the competition and there are other aspects involved. There are usually prizes in these competitions, and consenting adults can enter if they choose to. I will point out the obvious here: the vast majority of women don’t wear bikinis for, or take part in, beauty pageants. I think I can speak for most women by stating we wear bikinis mostly for comfort and to enjoy the weather on hot days, for swimming, or for taking part in a sport. Most of the time we’re free to choose whether or not to wear one.

Some women wear bikinis in modelling photo-shoots and, similar to beauty pageants, models wear varied items of clothing, cover many themes, and often have a lot of fun in shoots. They also may make money or a career out of it and men can be models too. Bikinis may be worn when taking part in sport too, including swimming and beach volleyball. I believe bikinis were originally worn to take part in sporting events.

The burqa is different. Women wear burqas for religious reasons; in some countries women are forced to wear them in public. Other countries may not enforce the burqa by law but encourage women to wear them. Sometimes it will be forced or encouraged by a girl’s father or a woman’s husband. Basically ‘modesty’ and ‘showing your hair is a sin’ are used as tools to encourage women to wear burqas, hijabs and similar items of religious clothing so even in situations when a woman does have the freedom to choose there’s a mental barrier that is created by having your head filled with beliefs, often from a young age. This can be interpreted as making the woman feel responsible for a man having an ‘impure’ thought about her to extreme levels. Thus to prevent men from having these thoughts, a woman must cover up completely from head to toe. There are many examples of this.

In order to satisfy religious rules related to covering a woman’s body, an outfit called a ‘burkini’ has been invented too. It looks similar to a wetsuit worn by divers and includes a head covering to conceal a woman’s hair though not her face. Although it enables a woman to swim without drowning, or to take part in sport, it does not offer the comfort or freedom available to women not shackled by religious belief.

One of the most sexist things about society today is the way women are often judged as either dressing or acting “modestly” or “immodestly.” Google defines modesty thus: 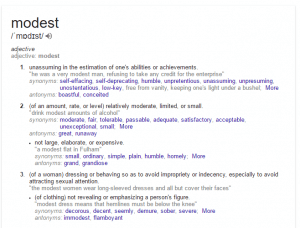 * (of a woman) dressing or behaving so as to avoid impropriety or indecency, especially to avoid attracting sexual attention.
“the modest women wear long-sleeved dresses and all but cover their faces”
* (of clothing) not revealing or emphasizing a person’s figure.
“modest dress means that hemlines must be below the knee”

Similarly, the terms “classy” and “trashy” are often used to describe women. Personally, I have varied tastes in clothing. I don’t dress to be “modest” or “immodest,” “classy” or “trashy.” Everything I wear is my choice and I dress for comfort, for the situation (e.g. the weather or where I am planning to go), and because I think an outfit looks good on me. I don’t live my life thinking of ridiculous concepts invented by humans that only or mostly apply to women and are used to judge or cast blame on women. The complete history of clothing is not my area of expertise, but I do know that scientific research has traced the wearing of clothing back about 100,000 years ago and a 2011 University of Florida study concluded that humans started wearing clothes some 170,000 years ago by studying the evolution of clothing lice. There is evidence to suggest wearing clothes can be linked to keeping warm and helping us survive extreme weather conditions. This obviously can’t be said about bikinis, worn mostly for comfort in hot humid weather and for sport.

Today is a hot day here in Western Europe and I have seen a number of men walking down the street topless wearing shorts. However rarely, if ever, are terms such as “modest” and “immodest” or “classy” and “trashy” used to define men. And they shouldn’t be, just as they shouldn’t be used to define women. Bikinis are an item of clothing worn occasionally by some women with freedom of choice. Unlike the burqa, the bikini is worn without religious doctrine, force, or emotional “encouragement” being involved.