The last Republican debates before the Iowa caucuses on Monday 1 February were held on the evening of Thursday 28 January (US Time) at the Iowa Events Centre in the state capital of Des Moines.

This debate was held at 7pm ET (1pm Friday NZT) and moderated by Fox News hosts Martha MacCallum and Bill Hemmer. There were four contenders, with Jim Gilmore making a return to the stage after not qualifying for some of the previous debates. 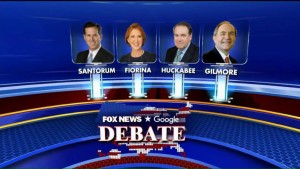 This is the undercard debate, but two of the contenders, Rick Santorum and Mike Huckabee, have won this state before (2012 and 2008 respectively), and Carly Fiorina is perhaps the most talented debater of all the Republican contenders. 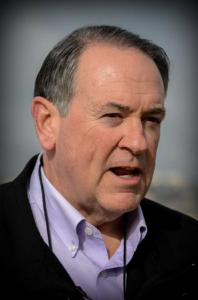 First up, Mike Huckabee was asked why he was not doing well in the polls. He said his message, which was the same as it had always been, was just not getting out there. (If that’s the case, surely that’s an indictment of his campaign?) He then went into a long spiel how he when he was president he would not only defund Planned Parenthood nationwide, he’d use the 5th and 14th amendment to protect life from the moment of conception to ban abortion altogether. He also talked about his plan for what he calls a Fair Tax. Of course, anyone who has any understanding of economics knows that so-called fair taxes are not fair, and hit the poor the hardest. It’s interesting that a candidate who insists his candidacy is all about helping the poor has as his central platform two policies that are designed to not only hurt the poor, but create more of them.

On a question about “New York values” Huckabee said he refused to get into the discussion, then said he wished he had all that New York money, then said he was glad they didn’t fund him, then got into a prepared emotive speech about a part-time Uber driver who has donated to his campaign, then used that speech to align himself with the anti-establishment side of the party that’s currently in the ascendancy. Yes, it was as revolting as it sounds.

Huckabee dealt with the DAESH question poorly. His plan was exactly what Obama is already doing, while implying that Obama was doing none of those things, except he’d add bombing of civilians. I guess he’s okay with killing innocents when they’re not USians.

When Huckabee was asked about shrinking the size of government, he again resorted to an emotional story, this time of an Iowa man who lost his job in manufacturing in 2007 and has never done so well again, as well as a more general statement about blue-collar workers. Then he waffled on about how wealthy everyone is who lives around Washington DC. He managed to get in a dig at Hollywood too. For someone who accuses the Democrats of the politics of envy, he sure sounded like he was appealing to that emotion to me.

Huckabee spoke well about how no-one actually wants to be poor, and the way benefits are structured often prevents them escaping the poverty trap. However, he offered no plan to fix the problem. He later got the opportunity to talk about his plan, which has simply been his “Fair Tax,” which most economists will tell you would not help the poor in the way he thinks. 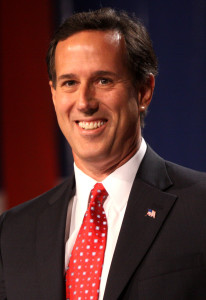 Rick Santorum spent his first speech moaning about the fact that the four candidates on stage had hardly got a mention in any of the advertising for the debates, and in the whole hour leading up to this debate, hadn’t been mentioned at all. He pointed out that in contrast, there were constant mentions of whether an entertainer was even going to show up for the later debate. He has a point. All four of these candidates, whether you agree with them or not, are, at least, serious candidates. It was a display of anger that would have played well to the Iowans who will be voting on Monday, but I suspect will appear as petulant to the wider audience.

Santorum’s second question was about terror attacks. This was playing to his strengths by Fox – they have a recently launched app where statements about certain topics from the candidates are played without the candidate being identified. The first one was about terrorism, and without knowing who they were voting for, viewers chose the statement by Santorum. The statement, if I recall correctly, supported the idea of suspending issuing visas to Muslims, and why this was a good idea (as far as Santorum is concerned). Tonight, he went into a confused explanation of what a caliphate was, an attack on Obama’s constant insistence that DAESH has nothing to do with Islam, and said that he would put troops on the ground in Iraq in order to take back the land DAESH has occupied.

Santorum also talked about wanting to increase the number of manufacturing jobs in the country. His plan here is actually not bad, but he didn’t describe it well. I suspect that’s because his strategy sounds a lot more like it comes from a Democrat than a Republican.

Santorum’s tax plan is a flat tax of 20%. A flat tax never works for poor people, but there are other aspects of his plan that are useful, such as an ability to repatriate overseas funds and zero taxes for manufacturing start-ups.

Unbelievably, Santorum’s commitment to the anti-choice movement was questioned because he didn’t attend the latest March for Life. (Fiorina pointed out how ridiculous it was to question Santorum on this of all people.) He went to great lengths to establish his credentials, including his support for life begins at conception legislation, for the Iowa voters, a majority of whom are Evangelicals. As he has in the past, he talked of his wife being advised to have an abortion for two of her pregnancies but choosing not to go ahead, which has always been a vote-getter for him.

The moderators gave Santorum the opportunity to attack Obama, and he took it in spades. He said Obama was “not trustworthy,” that “you can’t sit down and negotiate with him,” that “he won’t keep a deal,” and:

… he personally attacks people. He ascribes motives to people that aren’t true, then he tears them down. How are you going to work with someone if you don’t treat them decently, honestly, and respectfully?

Then he told us how wonderful he was in the same situations – not mean but respectful, arguing only on the issues.

I really hope he doesn’t do better than expected on Monday, because it’s time he dropped out of the race.

Carly Fiorina was the highest polling candidate among this group. Martha MacCallum commented that many in the GOP are so horrified that the polls show Trump and Cruz are by far the most popular candidates in their party that they will vote for Hillary Clinton. Fiorina was asked if this showed that the party was in crisis. As always she had a great answer ready – she talked of the “yawning chasm” between what the voters talk about and what the media reports on. She was able to tap into the anti-establishment feeling and at the same time present herself as a sensible leader and praise the voters.

Fiorina’s question on DAESH followed on from that of Santorum above. She was asked if she agreed with Obama that they were not an existential threat to the US. In a GOP forum, that’s a pretty unfair way to phrase the question, because to answer it honestly, she’s required to agree with Obama. She immediately turned that around to attack Clinton and Obama for saying that climate change was the most serious threat the US faced, which was naturally popular with a Republican audience. She said DAESH and Iran were the country’s most serious national threat (thereby pulling it back from an “existential” threat), and also turning that into an attack on Clinton and Obama saying their treaty with Iran left their Sunni allies wondering whose side they were on. She got Benghazi in there too. Again, she was able to turn the question to her advantage – linking Clinton with Obama and attacking them both while keeping her poise.

Fiorina spoke powerfully about her plan to get the tax policy down to three pages, which means abolishing almost all tax incentives and going back to zero-based budgeting. It will destroy the corruption that often goes with lobbying, and is threatening to many in the political class.

She made an effective attack on Hillary Clinton, and another one on Planned Parenthood.

Although I don’t agree with her on the policies, I continue to admire her as a candidate and am surprised she’s not doing better.

Jim Gilmore‘s first question pointed out that he was the only candidate that had so far not held a single campaign event in Iowa. I have to admit I was pretty surprised by this. I don’t know how he expects to win, and why he’s still in the race when he’s not even doing the basics. He’s not even going to impress anyone enough to consider him for a vice-president or cabinet position is he does so little on the campaign trail.

He says, as the only veteran in the race, he is there is represent them. He isn’t attending Trump’s alternative event to raise money for veterans (unlike Santorum and Huckabee) as he considers it a sideshow. Good on him for that.

Gilmore considers himself the candidate best qualified to deal with DAESH as he has a degree in foreign policy, has worked as a counterintelligence agent for the military, and was chairman of the Homeland Security committee for five years and he is a proud board member of the NRA. He plans to re-build the US military. (I suppose having a bigger military than the next eight countries combined, most of whom are allies, just isn’t enough.)

Gilmore is one of the candidates who has (stupidly) stated he would rip up the Iran deal on his first day in office. He was questioned about whether that was sensible and practical. His response was that the deal means Iran will have nukes in the future and that’s dangerous. His approach here was simplistic, but played well to the audience.

He then went into a conspiracy theory rant about the media shaping who was going to be the candidate. “This is going to change,” he said, “when I am president.” About three people clapped – it was seriously embarrassing. It’s time Gilmore dropped out.

This debate seemed by in large to be rigged to give the candidate a chance to give their stump speech in bits. There was little debate – it was answering questions from the moderators.