Evolution, Religion, and Freedom of Speech 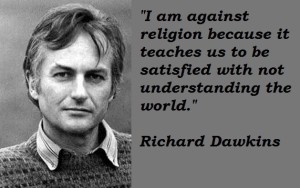 Yesterday (26 March) was Richard Dawkins’s 74th birthday. I’m a big fan of Dawkins – it was while watching one of his documentaries a few years ago that I realized that I was an atheist, and had been at least agnostic since I was a child. The God Delusion was my first foray into atheist literature, and everything Dawkins wrote in that book expressed thoughts I’d already had, but hadn’t said out loud. One of my favourite Dawkins quotes is the one to the right which I posted on Twitter yesterday along with a “Happy Birthday” for the man himself.

One of the attacks the religious make on atheists is that not believing in God means we have no sense of wonder. My experience has been quite the opposite. The more I learn and understand about our world and the way it works, the more in awe of it I am. I simply don’t understand how someone can be satisfied with the answer, “God did it”. I think reality is far more amazing and wonderful than the idea that some magic man created our universe. Besides, if it was a god, he didn’t do a very good job as Stephen Fry pointed out so eloquently recently:

In a post entitled Teaching Evolution in Kentucky – With Accomodationism on his website today, Professor Jerry Coyne wrote about some of the issues encountered teaching evolutionary theory in the United States. While his personal views are well known via his books, articles, website and media appearances, when performing his day job as a University of Chicago professor he refrains from mentioning religion or atheism. There is really no reason religion should come into a class about evolution and besides, the First Amendment of the US Constitution makes Coyne’s stance the legally correct one. 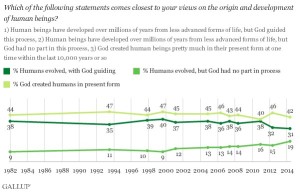 In the United States though, where only 19% of the population accept the reality that humans evolved with God playing no part in the process, it can be difficult to avoid talking about religion. For a large part of the population, evolutionary theory is a threat to their religious identity.

Coyne’s piece is about an article in Orion magazine written by Professor Jim Krupa of the University of Kentucky called Defending Darwin. (Go to the link to see the beautiful painting by Alexis Rockman if nothing else.) As someone who teaches evolution in a Bible Belt university to students who aren’t science majors, Krupa is frequently confronted by those who do not accept that evolution is a proven theory just as much as the theory of gravity or germ theory. Krupa reports that even those students who did biology in high school, are rarely taught human evolution. It seems the idea is just too controversial. Krupa states that students can accept evolutionary theory and retain their religion beliefs, and discusses how he teaches the idea that the two are not in conflict. As can be seen from the Gallup poll above, that is exactly what 31% of Americans manage to do. 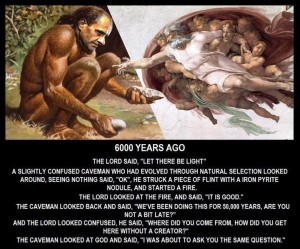 But is this form of accomodationism really a good way to teach? While acknowledging Krupa’s teaching ability Coyne doesn’t think so, and neither do I. I can accept that this is what many people may choose to do themselves after being taught the theory, but for a teacher to take this stance is wrong in my view.

If a student is having trouble reconciling the reality of evolution with their religious beliefs by all means consult a leader in their religious community, or explore the contradictions in the many ways that are available these days. But a teacher of evolution should stick to the subject. The reality is that religion is completely irrelevant to a course on evolution. The only reason it comes up is that so many people feel entitled to force their religious views on others in any and all environments. They do not have this right, especially in a country that espouses the principles of both freedom of speech and religion. 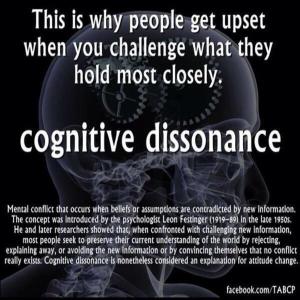 I’ve posted this cognitive dissonance graphic before. Krupa wrote of students who walked from his class as soon as he started lecturing about human evolution, including two who yelled that he was lying before storming out. They had been taught that humans were created by a god from their earliest childhood, and were clearly unable to reconcile what they were hearing with what they thought they knew. This much is obvious.

I’m more interested in their petulant and childish reaction when they are confronted by someone who challenges their worldview, because I find that extremely problematic, and it goes back to the Dawkins quote I posted at the start. It is also, I think, a reflection of the overly protective way many in generations X and Y have been parented. In this example we’re seeing those who have been brought up in an environment where the information they are exposed to has been restricted to that which supports their religious world view. They can’t handle hearing other opinions. (Although, of course, evolution is more than an opinion.) 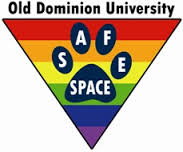 Another example of this phenomenon is the recent proliferation of Safe Spaces on American college campuses. Multiple Universities now have Safe Space initiatives, all of which seem to be competing for the most attractive logo. The American University in Washington DC even runs regular safe space workshops. While the idea of promoting inclusion and acceptance for all students is a good one, it also promotes the idea that spaces that aren’t denoted “safe” are unsafe.The idea that no-one can say anything that might hurt someone else’s feelings is patently ridiculous in an environment which is supposed to be about challenging ideas. It has created such inanities as the University of California student council banning the display of national flags in their lobby because someone might get upset and that this somehow displays “…freedom of speech is a valued right that ASUCI supports”. To me, this goes against the whole notion of freedom of speech and expression.

Jerry Coyne wrote about the safer space initiative at Columbia University in a piece entitled ‘The anti-free speech police ride again‘. At Columbia, Safer Space flyers have been distributed to all students encouraging them to put them in their windows. Again, while the idea of making students of any and all descriptions feeling equally valued is a good one, what these flyers really do is restrict and suppress freedom of speech. In order to stop racism or sexism or anti-Semitism or homophobia or any other prejudice the idea should be to come up with a better argument than those who hold such ideas. Homophobia isn’t reducing because we stopped talking about gay people, it’s reducing because we started, and we demonstrated that the prejudices people held were nothing more that ignorance and baseless fears. 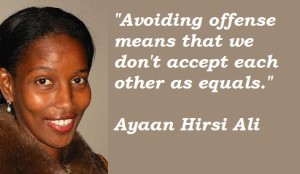 For a while now, universities have been rescinding speaking invitations when students protest that some may be offended by the speaker too. One of the best known is that of Brandeis University who were to present Ayaan Hirsi Ali with an honorary degree last year, but the accolade was withdrawn when multiple student groups, on the initiative of the Muslim Students Association, protested. According to the New York Times a spokesperson said “We cannot overlook that certain of her past statements are inconsistent with Brandeis University’s core values”. Those past statements were her objections to some of the practices of Islam, which really should not have been a surprise if they knew her well enough to offer her an honorary degree.

Freedom of speech and expression are the most important rights we have. There are many countries where people don’t yet have those rights, especially if they are the member of a minority, women, children, or poor. Students of an American University are amongst the most privileged people on the planet, yet many of them do not seem to appreciate how lucky they are. Instead of reveling in a rich intellectual environment and taking advantage of it to expand their mental frontiers, they are trying to continue the protections of their childhood. It’s time to grow guys. Make the most of this opportunity to explore ideas – don’t protect yourself from them and especially don’t try to stop others from doing it. 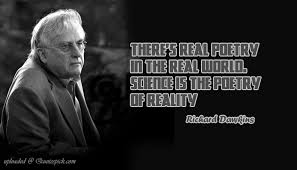