Europe Benefits from the Trump Administration

Yes, you read that correctly: I’m saying something good is coming from the Trump presidency. Before you start questioning my sanity though, read a bit further.

For some time Europe has seen a rise in ultra-right-wing nationalist political parties. Now this is Europe so while they often have religious links, they’re largely secular. Therefore, I’m not talking about groups like Family First or C-Fam taking over. The ultra-right-wing nationalist parties in Europe have largely risen in response to the increase in refugees from the Middle East, especially Syria and Libya.

Therefore, Donald Trump’s campaign for toughness on illegal immigration put him in political alignment with Europe’s nationalist parties. His success soon made him their hero. When he won the US presidency, these parties rode the victory wave. Their popularity began increasing too – Trump’s victory increased the likelihood of their own success.

Like the supporters of the European nationalist parties, one of the things President Trump’s supporters like most about him is that he’s not a politician. They see politicians as corrupt and so their perception of anyone not part of the government is automatically better. The thing is though, although there are definitely some issues, corruption is actually not as bad as it appears. Western Europe especially has some of the most transparent governments in the world. The US isn’t quite so good but certainly nowhere near as bad as the conspiracy theorists would have is believe.

Transparency International has been calculating this index since 1995 and I’m proud to say New Zealand has always been at or near the top. In the recent release of the 2016 index we continue this tradition; Denmark and New Zealand are first equal. Further, we are the only two countries that rank in the top echelon scoring 90 or above out of a possible 100. There is still room for both of us to improve though and our governments are largely committed to doing that. (Being the best does not mean you can’t do better, which is a lesson the American exceptionalists need to learn!)

Most European countries regularly score very well in the index – the US not so great but as I said above, they’re not too bad. In 2016 they were 18th out of 176 countries with a score of 74/100. Following are the 2016 table and map (both interactive):

Anyway, I digress. Back to the point of the post.

Even the most partisan Trump supporter has to admit his presidency has not begun smoothly. His approval ratings are on a steady downward trajectory. They are so low that it is clear many who voted for him are not happy with how he’s doing so far. 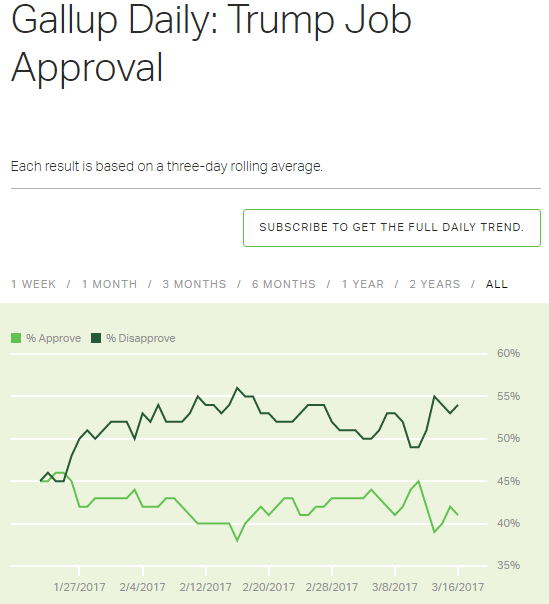 All the polls I use in my posts are from reliable sources. However, in case you’re one of those who think Gallup has a left-wing bias, here’s the most recent Fox News poll on the president’s approval rating. It shows a 5 point drop from February to March. (Note: Fox News polls are also a reliable source.)

As President Trump’s approval rating has gone down, so has that of the parties in Europe that see him as a hero. The idea of a maverick in political power is a lot better than the reality. There’s an argument we have to give the president a chance. He’s only been in power for a few weeks after all, and has had little time to settle. That’s true and is a fair argument.

However, there have been things President Trump has done, and continues to do, that no one can make any excuses for. In particular, his stream of tweets, and the doubling-down, on the claim that former President Obama wiretapped him. Quite frankly, he’s making a fool of himself in front of the entire world.

Just today, in a joint news conference with Germany’s Angela Merkel, he quoted a lie by Judge Andrew Napolitano that Fox News has gone on record as denying. Another person could perhaps blame the judge for this error, but the president has access to the genuine information.

Donald Trump was always less popular internationally than he was in the United States. A WIN/Gallup International poll reports the following:

A global poll conducted by a network of leading pollsters reveals that the American Presidential Election is arousing widespread engagement across the world, where a vast majority is keen to tell pollsters their favourite between Hillary Clinton and Donald Trump. The poll carried out among 45 countries, covering nearly 75% of world population shows that Hillary Clinton is ahead of Donald Trump in all but one country, Russia. She is remarkably popular in Western Europe, Latin America and Africa. Donald Trump is popular in Russia and China. … The poll was carried out during August and September [2016] among a total of 44,194 men and women …. 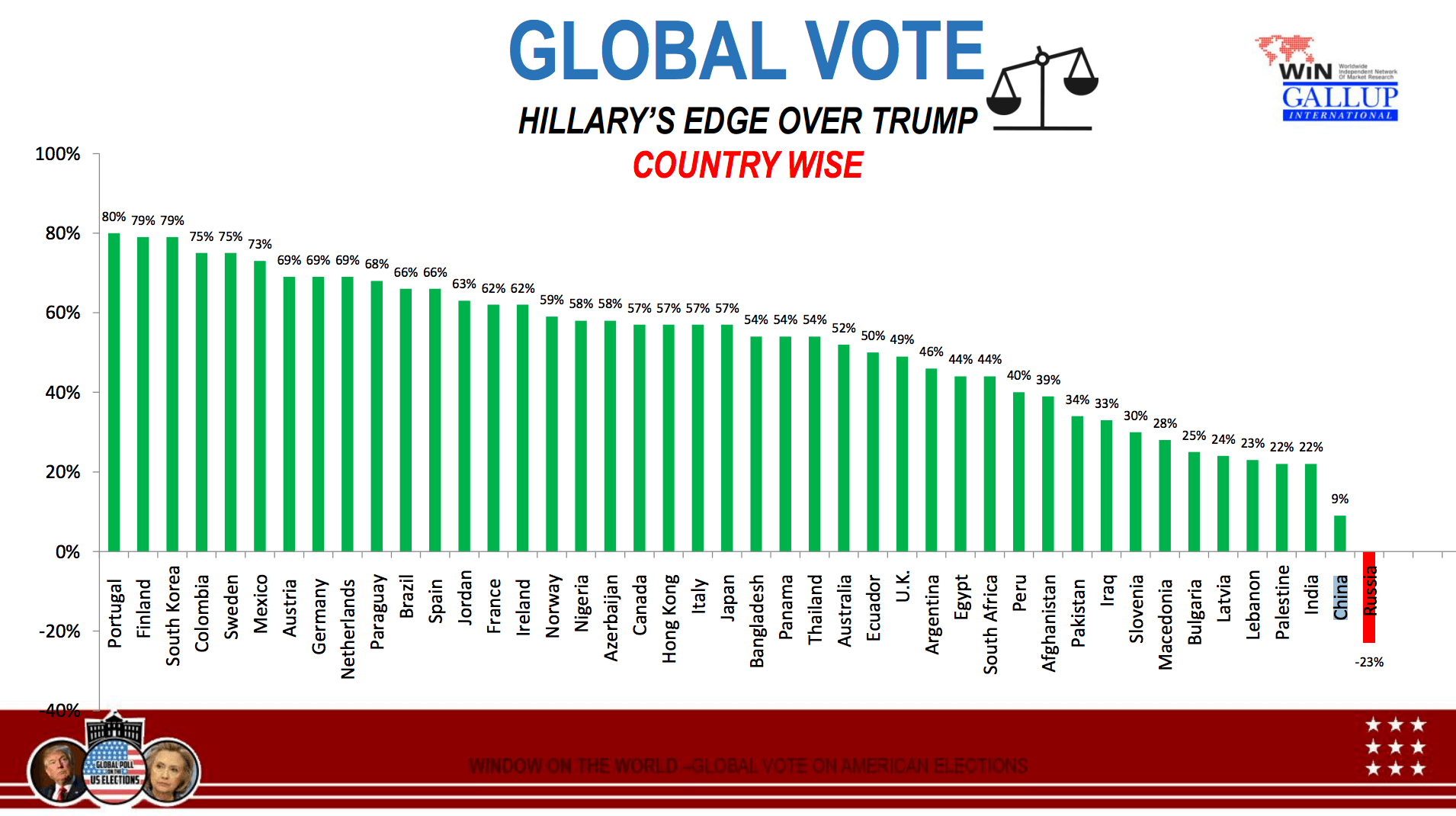 The strongly anti-Muslim and anti-EU politician Geert Wilders in the Netherlands was one of those whose popularity saw an increase on the back of Trump’s rise. (See here for a New York Times profile of Wilders.) Many thought he may even win the election. When it came time to vote it seems the image of Trump’s White House meant Wilders did nowhere near as well as expected. His party did better than the previous election in 2012 increasing the number of seats won from 15 to 20. But, he will not be able to form a governing coalition.

In the end, people chose the stability of maintaining the current government. The only place where Wilders came close to defeating current prime minister Rutte is Rotterdam, which has the largest Muslim population and a Muslim mayor. Importantly, there was a record turnout of over 82% showing a commitment to stopping Wilders take control of government.

This is possibly also a blow for Russia’s president Putin. He is said to be supporting those political parties that are opposed to the European Union as part of his ongoing efforts to destabilize Europe and undermine Western-style democracy.

As always, I enjoy Trevor Noah’s take on the situation:

Also enjoying a bump in popularity following Trump’s election was Marine Le Pen of the far-right National Front political party in France. There were predictions she will do very well in the upcoming French presidential elections. However, she too appears to be losing support as the Trump train continues to constantly skip on and off the rails.

The same phenomenon is occurring in Germany. Until recently it was thought Angela Merkel could lose the chancellorship of Germany in the upcoming elections there. Her popularity took a hit due to her welcoming attitude towards refugees and voters were moving to the far-right nationalist party there. However, voters are now moving their support back towards more centrist parties.

The GOP will tell you that the only reason Merkel is kind to refugees is because of lingering national guilt from Nazi-era Germany. However, there is actually a good reason for modern Western countries to welcome young immigrants. We need them because we aren’t giving birth to enough people ourselves to look after retiring baby boomers.

Further, despite an increase in the number of Muslims in Germany from 2011-2016 of around 1.1 million, there have only been a tiny number of isolated incidents related to terrorism. The fearmongering of what could happen is simply not eventuating; most people are integrating reasonably well. Also, the number of Muslims as a percentage of the population is not as high as the fearmongers are telling people. The Federal Office for Migration and Refugees (BAMF) released a report in December. It places the number of Muslims at between 5.4% and 5.7%. A survey by a firm called Ipsos shows that prior to the report, the public perception was that Muslims were up to 21% of the population.

The Rest of Europe

In the recent election in Austria it was thought that the far-right candidate, Norbert Hofer, might win too. In the end the Green Party candidate came through there. You can check out what’s happening in other countries by clicking on the graphic below, which goes to a New York Times article. 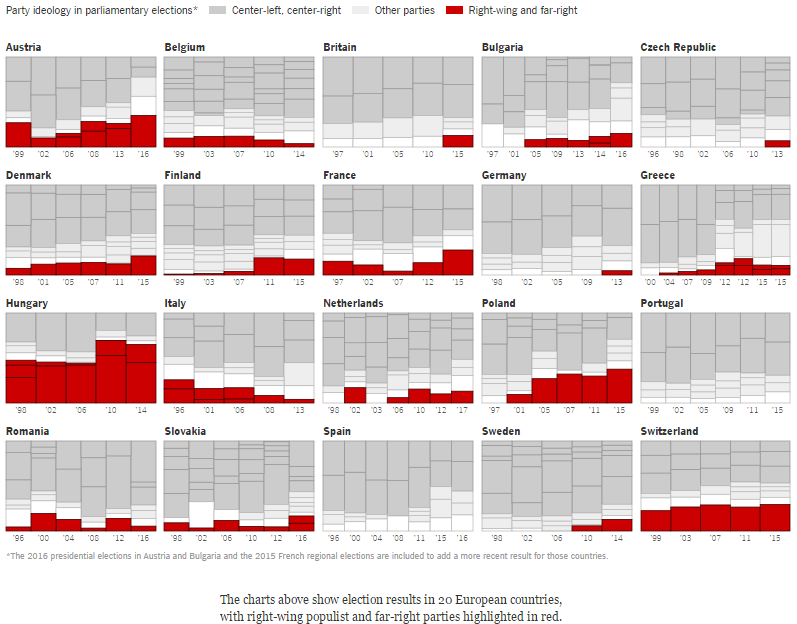 Not long ago, there were worries that far-right nationalist and anti-EU parties might sweep to power across Europe. Now, the reality of what it’s like to actually be governed by someone like Donald Trump is frightening a lot of people off. Thank you for your example President Trump. (And those aren’t words you hear every day, even from his fans!)