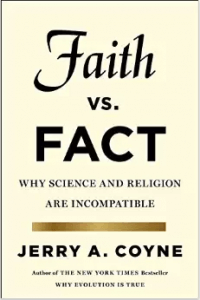 Many of you, like me, are readers of Jerry Coyne’s Why Evolution is True website. Yesterday he posted a story called ‘Templeton-sponsored essay contest: Big bucks for telling stories about accommodationism‘. It detailed an essay competition offering large financial prizes for personal stories that show science and religion in harmony. Templeton, of course, is all about promoting religion in science, and they don’t much care how ethically dubious their methods are. Many scientists, including Coyne, refuse to accept money from the foundation on principle for this reason.

The competition is asking for “creative nonfiction” stories to advance the Templeton’s dogma “… that science and religion can reinforce each other to allow a more nuanced, profound, and rewarding experience of our world and our place in it.” They continue:

One of the best ways to foster collective understanding is with a good story. Creative nonfiction–true stories, well told–allows for complexity, novelty, and revelation, and through compelling voice, suspense, character development, and well-chosen details has the potential to engage the widest audiences and change the way they know the world.

If you have a true story that you would like to tell about harmonies between science and religion—drawn from your personal life, your work, your experience, your studies—we want to help you do it.

My opinion is that “creative nonfiction” is a synonym for “lies.” The stories submitted may be based on true experiences, but whether they would stand up in court is something I personally consider doubtful.

The truth is that science and religion are not compatible. While there are, of course, many scientists who are religious to varying degrees, there is no place for religion in science itself – a fact Coyne himself demonstrated convincingly in his latest book, Faith vs Fact: Why Science and Religion are Incompatible.

In the comments of that post was the following exchange: 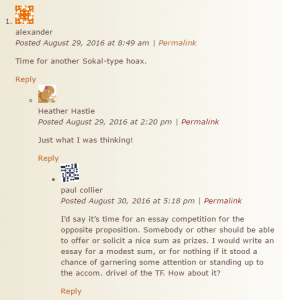 A “Sokal” hoax refers to Alan Sokal, a physics professor who submitted a hoax article to an academic journal called Social Text called ‘Transgressing the Boundaries: Towards a Transformative Hermeneutics of Quantum Gravity’ in 1996. As stated by Wikipedia:

The Sokal affair, also called the Sokal hoax, was a publishing hoax perpetrated by Alan Sokal, a physics professor at New York University and University College London. In 1996, Sokal submitted an article to Social Text, an academic journal of postmodern cultural studies. The submission was an experiment to test the journal’s intellectual rigor and, specifically, to investigate whether “a leading North American journal of cultural studies – whose editorial collective includes such luminaries as Fredric Jameson and Andrew Ross – [would] publish an article liberally salted with nonsense if (a) it sounded good and (b) it flattered the editors’ ideological preconceptions”.

The article, “Transgressing the Boundaries: Towards a Transformative Hermeneutics of Quantum Gravity”, was published in the Social Text spring/summer 1996 “Science Wars” issue. It proposed that quantum gravity is a social and linguistic construct. At that time, the journal did not practice academic peer review and it did not submit the article for outside expert review by a physicist. On the day of its publication in May 1996, Sokal revealed in Lingua Franca that the article was a hoax, identifying it as “a pastiche of left-wing cant, fawning references, grandiose quotations, and outright nonsense … structured around the silliest quotations [by postmodernist academics] he could find about mathematics and physics.”

The hoax sparked a debate about the scholarly merit of humanistic commentary about the physical sciences; the influence of postmodern philosophy on social disciplines in general; academic ethics, including whether Sokal was wrong to deceive the editors and readers of Social Text; and whether Social Text had exercised appropriate intellectual rigor.

Anyway, I thought commenters alexander and paul collier had a good idea, so here’s the competition:

There are two categories, and you can enter both if you wish.

1. Sokal-type Essay
Write an essay of an experience that led to a “personal” epiphany of the “undeniable” link between religion and science.

2. Anti-Accommodationist Essay
Write an essay expressing clear and concise arguments to use in opposition to the proposition that religion and science are compatible.

Rules
Entries can be up to 1500 words. There is no minimum word limit.

Closing Date for Entries
Sunday 2 October. Best entries will be posted soon after.

Submission of entries includes a skill test: go to the Why Evolution is True website, find the link to “Jerry Coyne Research Interests” and click on it to locate his e-mail address. Submit your essay via that address, making sure it’s clear that your e-mail/essay is an entry to the Heather’s Homilies competition. Jerry will forward your entry onto me. No, this isn’t a joke – he’s doing me a favour so I don’t have to tell everyone my e-mail address.

There are no prizes except the pleasure of seeing your essay published on Heather’s Homilies. (No, not even anywhere near as good as Huffington Post!)