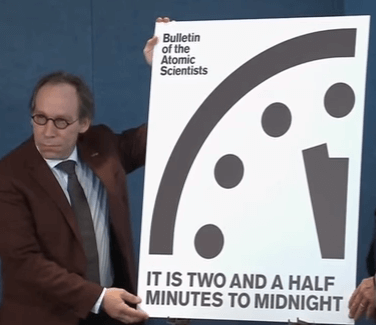 The Bulletin of the Atomic Scientists made this significant and serious move last week. However, there’s so much going on at the moment I didn’t find time to write about it. Then, the first thing I saw on CNN today was:

During the statement Flynn, of course, criticized the Obama administration for not being tough enough in the past.

As we already know, Trump is a major critic of the Iran nuclear deal. During the campaign he vowed to rip it up. Now though, even Israel, whose prime minister was one of the harshest critics of the deal, are changing their mind.

Shemuel Meir, a former Israeli Defense Forces (IDF) analyst and associate researcher at the Jaffee Center for Strategic Studies at Tel Aviv University says that the Iran deal is “beneficial to Israeli security, and thus must be safeguarded,” adding that the deal “removed the existential threat hovering above Israel.”

He said it “blocked Iran’s path to a nuclear weapon, and prevented the emergence of an arms race in the Middle East.” He argues that “without an Iranian nuclear weapon, Saudi Arabia and Egypt have no incentive to obtain nuclear weapons, thus preventing a domino scenario.”

“The deal also closed off the chapter of pre-emption strikes scenarios on Iran’s military targets and reduced the risks for a new and long regional war. A possibility that could become relevant should Iran deal be ripped up,” he says.

Others in the country agree. Two days after Trump’s win, The Times of Israel said that rolling back the Iran deal could isolate the U.S., alienate international allies, and play into the Iranian’s hands. Similar views have been common in the country.

Flynn didn’t specify what “putting Iran on notice” meant, but Trump has made much of being tough and keeping threats. Iran is already showing it won’t back down in the face of threats. Of course, anyone with any sense would expect that.

It seems things are even worse than they were last week when the Bureau of Atomic Scientists made their announcement.

The clip above is from CBS news, which is a US organisation. Like all news organisations, they have edited the announcement. In their case, they have removed references to Donald Trump. The Bulletin considers he takes significant responsibility for making the world a more dangerous place. If you look at the video from the Guardian (which I am unable to embed), they have chosen different words from Rachel Bronson to highlight. They include the reference to Trump.

So much for the “lame-stream media” always attacking Trump. In this case, they are protecting him. Further, despite the significance of this story, I had seen it nowhere until I came across it by accident while researching another post.

Full Announcement from the Bulletin of the Atomic Scientists

Rachel Bronson, Executive Director and Publisher of the Bulletin of the Atomic Scientists , who makes the announcement, outlines the concerns of the expert who make the Doomsday Clock calculation each year. In particular, she spoke of the failure of world leaders to deal with “humanity’s most pressing existential threats…”. That is, nuclear weapons and climate change.

Bronson further said there were two areas which were of most concern.

The first has been the cavalier and reckless language used across the globe, especially in the United States in the presidential election and after around nuclear weapons and nuclear threats. And the second is a growing disregard if scientific expertise. Expertise that is needed when it comes to pressing global challenges, including climate change. There is a troubling propensity to discount, or outright reject, expert advice related to international security, including the conclusions of intelligence experts.

(See below for the backgrounds of the experts.)

None of the experts minced their words in making it clear that it is the current world leaders who are the problem. In particular Donald Trump was singled out. Vladimir Putin was considered second only to Trump in making the planet a more dangerous place.

Titley spoke of Trump’s reliance on “alternative facts” instead of the advice of scientists.

To step back further from the brink will require leaders to have both revision and restraint. President Trump and president Putin, who claim to have great respect for each other, can choose to act together as statesmen, or act as petulant children risking our future.

Regardless, these issues are too important to be left in the hands of a few men. We therefore call upon all people to speak out and send a loud message to your leaders that you will not allow them to needlessly threaten your future and the future of your children.

In the Q & A, the scientists were even more clear about the failures of current world leaders, especially Trump. Pickering, for example, spoke of how Trump is dismissive even of the Scientific Method.

One of the speakers’ themes, and which Krauss said explicitly, is people can have their own opinions but not their own facts. Their greatest concern of the approach of the Trump administration is its dismissal of scientific and other expertise.

Another strong theme was that “words matter”. The emphasis was principally in relation to Trump’s loose rhetoric.

The action of moving the Doomsday Clock thirty seconds closer to midnight is an historic first. Since its inception in 1953, they have always moved the clock further away. 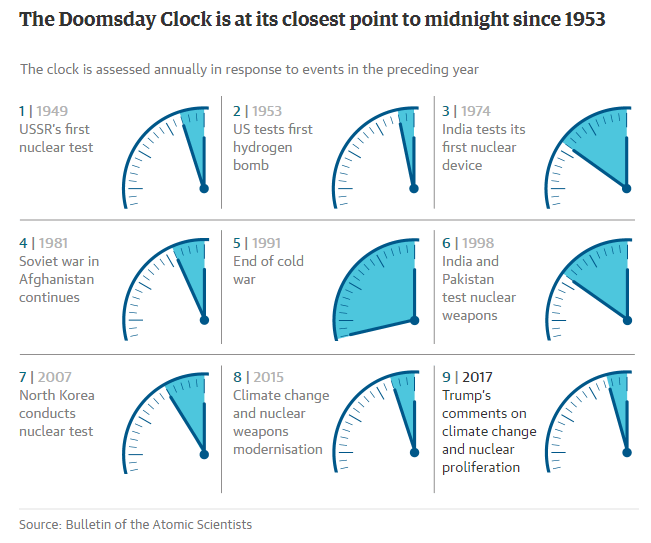 (Source: The Bulletin of the Atomic Scientists via the Guardian.)

It cannot he emphasized enough, and as Krauss said several times, this is the closest the clock has been to midnight for 64 years. That’s longer than most people on the planet have been alive. This is really, really, serious.

Krauss and Titley also wrote an op-ed about the Doomsday Clock for the New York Times entitled ‘Thanks to Trump, the Doomsday Clock Advances Toward Midnight‘. This also notes the significance of Trump in the decision to advance the clock.

In 2016, the global security landscape darkened as the international community failed to come to grips with humanity’s most pressing threats: nuclear weapons and climate change.

Making matters worse, the United States now has a president who has promised to impede progress on both of those fronts. Never before has the Bulletin decided to advance the clock largely because of the statements of a single person. But when that person is the new president of the United States, his words matter. …

But Mr. Trump’s statements and actions have been unsettling. He has made ill-considered comments about expanding and even deploying the American nuclear arsenal. He has expressed disbelief in the scientific consensus on global warming [and] he has shown a troubling propensity to discount or reject expert advice related to international security. And his nominees to head the Energy Department, the Environmental Protection Agency and the Office of Management and the Budget have disputed or questioned climate change.

• North Korea’s continuing nuclear weapons development, the steady march of arsenal modernization programs in the nuclear weapon states, simmering tension between nuclear-armed India and Pakistan, and stagnation in arms control. Russia is building new silo-based missiles, the new Borei class of nuclear ballistic missile submarines and new rail-mobile missiles as it revamps other intercontinental ballistic missiles. The United States is moving ahead with plans to modernize each part of its triad … As it improves the survivability of its own nuclear forces, China is helping Pakistan build submarine platforms. And Pakistan and India continue to update and expand their nuclear arsenals.

•Doubt over the future of the Iran nuclear deal, which succeeded in accomplishing its goals during its first year, in the Trump administration.

•Deteriorating relations between the United States and Russia, which possess more than 90 percent of the world’s nuclear weapons. This was reflected in disputes over Ukraine, Syria, ballistic missile defenses in Europe and election interference. There seems to be little prospect that negotiations to reduce nuclear arms will resume. Whether this will improve under President Trump is unclear.

•Mixed results in global efforts to limit climate change. The Paris climate accord went into effect in 2016, and countries are taking some actions to bring down emissions of greenhouse gases. There are encouraging signs that global annual emissions were flat this past year, though there is no assurance this heralds a trend.

These are all matters in which President Trump has signaled that he would make matters worse either because of a mistaken belief that the threats posed by nuclear weapons and climate can be ignored or that the words of a president of the United States do not matter to the rest of the world.

There’s a lot here to be concerned about. The full statement from the Bulletin can be downloaded as a pdf, and in available here. Also, see here for more information about the Bulletin.

Backgrounds of Bulletin of the Atomic Scientists Experts