Donald Trump: Phyllis Schlafly was “a Champion for Women.”

In typical Trump fashion, Trump makes his own truth. But it’s statements like this – calling Phyllis Schlafly “a champion for women” – that expose both his ignorance and misogyny.

The truly great Phyllis Schlafly, who honored me with her strong endorsement for president, has passed away at 92. She was very special!

As a tribute to the late, great Phyllis Schlafly, I hope everybody can go out and get her latest book, THE CONSERVATIVE CASE FOR TRUMP.

He also wrote a short obituary to her on his campaign website: 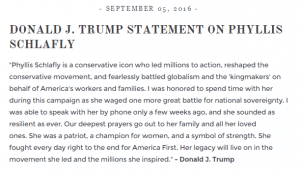 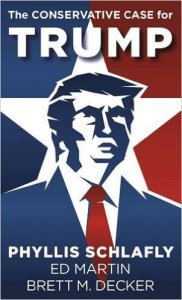 Phyllis Schlafly’s latest book, The Conservative Case for Trump was released on 6 September 2016, the day after her death from cancer at 92 years of age. This is obviously a very sad event for her family, who were with her when she died. She was not, however, in Trump’s words, “a champion for women.”

She opens her book with the statement:

The stakes are unmistakably high. I know that some well-meaning conservatives find Trump puzzling or even offensive, but I trust that this book—the culmination, for me, of more than seventy years of active involvement in Republican politics—might help sway them.

That seventy years started with her support of the McCarthy era anti-communist extremism and opposition to the Civil Rights Act, which she continued after it was passed into law in 1964. Then came decades opposing the women’s movement, women’s rights, and LGBT rights. She finally added an opposition to human rights for undocumented immigrants and Muslims to the list. All this apparently led her to supporting Trump for president so strongly, the last public action of her life was to write a book about it.

The book’s blurb on the Amazon page is scary:

Schlafly, the conservative icon whose celebrated classic A Choice Not An Echo (over 3 million copies sold) upended the 1964 Republican Convention, persuasively argues that Donald Trump is worthy of every conservative’s vote. Joined by Ed Martin, the former head of the Missouri Republican Party, and Brett Decker, formerly an editorial writer with the Wall Street Journal and the Washington Times, Schlafly presents the real Trump, the Trump she and her colleagues have met with and interviewed, the Trump who is far more conservative than you think.

In The Conservative Case for Trump, Schlafly reveals:

1. How Trump’s appointees to the Supreme Court (on which Schlafly advised him) could be the most consequential in a century

2. How, unlike any other Republican, Trump could actually fix the nation’s immigration mess

3. Why his economic platform could spark an economic revival on the scale of the Reagan boom of the 1980s (it is based on much the same plan)

4. How Trump will defend the First Amendment—guaranteeing freedom of speech and religion—against an ever more dictatorial Left

5. Why Trump’s fresh thinking on defense and foreign policy is long overdue—and could send terrorism into rapid retreat

Donald Trump is the most controversial Republican presidential candidate since Barry Goldwater, and could be the most conservative and successful president since Ronald Reagan. In her very last contribution to the conservative movement, Phyllis Schlafly, the “sweet-heart of the Silent Majority,” makes an irrefutable case that needs to be shared with every wavering voter. Nothing less than the future of our country is at stake.

Trump, as we all remember, opened his presidential campaign with a speech attacking undocumented immigrants and his vitriol towards them has fed his most ardent supporters ever since. Schlafly was just the type to be attracted by such rhetoric. As Right Wing Watch reports:

In recent years, Schlafly turned much of her attention to fighting immigration, and particularly to fighting efforts within the GOP to be more welcoming to immigrants. After the Republican National Committee responded to Mitt Romney’s loss in the 2012 presidential election by issuing an “autopsy” report that urged the party to stop alienating Latinos, partially by considering immigration reform, Schlafly lashed out, saying that there was no hope for the GOP to win Latinos. Latinos, she said, don’t “have any Republican inclinations at all” because “they’re running an illegitimacy rate that’s just about the same as the blacks are.” She added that Latinos “come from a country where they have no experience with limited government. And the types of rights we have in the Bill of Rights, they don’t understand that at all, you can’t even talk to them about what the Republican principle is.” …

“In my mind’s eye,” she said, “I see those railroad cars full of illegals going south. That’s what they ought to do.” …

She tried to square this anti-immigrant sentiment with her Christian beliefs by claiming that the Bible’s demands of “kindness and compassion” to strangers do not apply to the government’s treatment of immigrants.

Schlafly, then was just the type of person Trump’s platform was designed for.

As previously mentioned, Schlafly’s greatest claim to fame is that she spent much of her life fighting AGAINST rights for women. As the Advocate points out:

… she’s most famous for fighting the Equal Rights Amendment [ERA], which would have added these words to the U.S. Constitution: “Equality of rights under the law shall not be denied or abridged by the United States or by any state on account of sex.” When Schlafly began her Stop ERA campaign in 1972, the ERA had been passed by both houses of Congress and ratified by 30 states out of the 38 needed to be added to the Constitution … 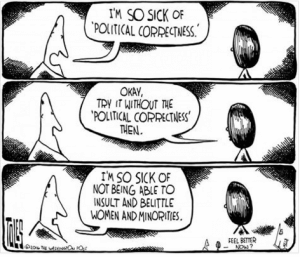 The Washington Post credits her with preventing the Equal Rights Amendment “almost single-handedly.” In her opposition to the ERA she said it would lead to same-sex marriage, unisex restrooms, abortion, women drafted into the military, and the repeal of laws that barred women from workplaces deemed dangerous – all things she thought were dangerous to society.

Following her success in stopping the ERA Schlafly formed the Eagle Forum which was a women’s organization in opposition to women’s liberation. The organization opposed abortion rights for women and Title IX, which is a US law that bans sex discrimination in education. She thought that men should be in charge of their wives and that it was impossible for a husband to rape his wife. In her opinion, “by getting married, the woman has consented to sex.”

And it gets worse. In 1981 when testifying before a US senate committee she said:

Sexual harassment on the job is not a problem for virtuous women, except in the rarest of cases. Men hardly ever ask for sexual favors from women from whom the certain answer is no. Virtuous women are seldom accosted by unwelcome sexual propositions or familiarities, obscene talk or profane language.”

I’m not even sure where to start with that. I suppose it means that she thinks, among other things, that a man can judge whether a woman is “virtuous” just by looking at her. Otherwise, there’d be no women being hassled in the streets by strangers, would there? And what on earth is “virtuous” anyway, and who gets to decide?

Equal pay for equal work was another thing she didn’t think women had any right to – she thought not only should men be paid more than women, but that the wage gap should be increased! In 2014 she wrote in The Christian Post:

Another fact is the influence of hypergamy, which means that women typically choose a mate (husband or boyfriend) who earns more than she does. Men don’t have the same preference for a higher-earning mate.

Suppose the pay gap between men and women were magically eliminated. If that happened, simple arithmetic suggests that half of women would be unable to find what they regard as a suitable mate. …

Sex education is schools was another of her crusades – she was against it or course – calling it “a principle cause of teenage pregnancy.” HIV/AIDS education was problematic for her too. The Washington Post again:

Of course, good quality sex education in schools, along with the availability of contraception, is actually the best way to reduce teenage pregnancy and prevent the spread of sexually-transmitted diseases.

Schlafly, a devout Roman Catholic, was intelligent and well-educated. She received her Bachelor of Arts from Washington University and a Master of Arts in Political Science in 1945 from Radcliffe College (the female co-institution of the then all-male Harvard). In 1949 at 25 she married Fred Schlafly who, she said, “saved her from life as a working girl.” (I assume she didn’t mean prostitution!) In 1978 she also achieved a Juris Doctor from Washington University Law School. She had wanted to attend law school earlier, but her husband was opposed to the idea, so she put it off until he changed his mind.

As is so often the case with religious conservatives, there was more than a taint of hypocrisy in her sermonizing. Although constantly ramming home the message that a woman’s place was in the home, the demands of preaching that message left little time to look after her own six children. She retained a full-time housekeeper for that. And while praising Sarah Palin for being nominated by the Republican party to run for vice-president in 2008, in 2010 she opined that “no woman in ready to be president.” Just two months ago she made the profound statement (yes, that’s sarcasm) when discussing her support for Trump:

Our greatest presidents have all been men, and they’ve been very good for our country.

And I bet his daughters don’t agree.

If you enjoyed this post, please consider donating a dollar or two towards the upkeep of the website so I can continue to keep it ad-free. Thank you. 🙂