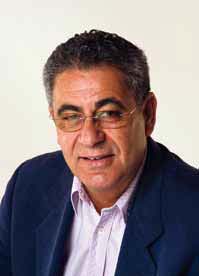 Well, we knew it would happen. In my last article on this I said:

I hope this revolting act will help those who decry any criticism of Islam as Islamophobia recognize just what a problem it has the potential to be. Any belief system that includes an invocation to kill critics and unbelievers, and rejects all attempts at reform is likely to spawn such acts.

My hope was wasted, and a prominent New Zealander has said on Facebook that it is the fault of the editor of Charlie Hebdo, Stephane Charbonnier, that he and eleven others are dead:

The hate and ignorance displayed by Fox are unbelievable. There are so many things wrong with what he has to say, I’m not even sure where to start. I’ll try and take his “points” one by one.

1. Stephane Charbonnier (who Fox didn’t even bother to name) “…[assumed] cultural superiority and arrogance, he was the bully believing he could insult other people’s culture and with impunity …” 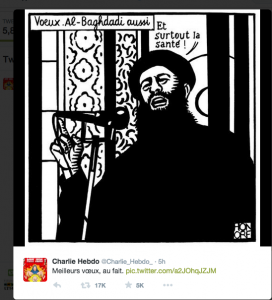 Charlie Hebdo is a satirical magazine, similar the Mad magazine. It mocks EVERYBODY Derek, not just Muslims, not just religious people. There is no assumption of cultural superiority or arrogance – they’re just trying to make people laugh. If Charlie Hebdo picked exclusively on Muslims, you might have a point. They don’t – it’s just that extremist Muslims are the only ones incapable of ignoring stuff they don’t like. There was no bullying. There was satire. The last tweet they sent before the attack was a mock New Year’s greeting from al-Baghdadi (right), the self-appointed leader of DAESH, who claims he’s a direct descendant of the prophet Mohammed. Further the version of Islam and Sharia that al-Baghdadi is promoting is not one that any decent human being should insist needs protecting from insult. His ideas need to be be exposed and criticized.

2. “… unfortunately in paying the price for his arrogance [Stephane Chabonnier] took another 11 people with him.”

Fox is saying here that Stephane Chabonnier deserved to die for exercising his right to freedom of speech. That Mr Fox, makes you a**hole of the year, and we’ve still got 51 weeks to go. Even if all your charges of bullying, racism and bigotry stood up, that is no excuse for anyone to commit murder! And you’re talking like it’s completely fair that if these murderers felt the need to kill eleven other people in their rightful murder of Chabonnier, that’s OK too. All I can say is I really am pleased you failed in your bid to become the MP for Ikaroa-Rawhiti in 2008 – we can do without people like you in our parliament.

3. “… and he believed he would be protected in his racism and bigotry by the French state. … Power cultures all like to use the old chestnut of freedom of speech when they choose to ridicule people who aren’t exactly like them, and mostly they get away with it.”

For a start, there’s no racism here – Islam is not a race, it is a religion. I don’t know how many times we have to explain this. People like Fox have this idea that because most of the Muslims he sees in the media have brown skin, this is a racial issue. It’s not. That is a red herring and an excuse to make the attack worse by injecting accusations of racism.

And what exactly, Mr Fox, is your problem with freedom of speech being protected by the state? If that’s not a privilege you appreciate, how about going to live with DAESH where your every word will be monitored and blasphemy is punished by execution. As a former broadcaster and politician, you of all people should appreciate the value of living and working in a country where free speech is protected. 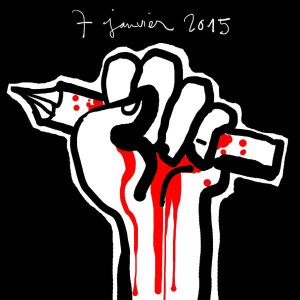 The response of Illustrator Loic Secheresse to the massacre

People like you, Mr Fox, use the “old chestnut” of “power cultures” to excuse any kind of bad behaviour, even, as in this case, murder. How do you suggest we deal with people like al-Baghdadi who are going around chopping off the fingers of cigarette smokers? It’s al-Baghdadi who’s developed a culture of power and control – to him freedom is a dirty word. As Sam Harris said in the now infamous interview of Bill Maher’s Real Time, “We have to be able to criticize bad ideas.” It’s true that many of the attempts to help by the West in the Middle East have been nothing short of disastrous, but there have been good initiatives too, and DAESH cannot be left to flourish.

4, “These guys liked the privilege but didn’t think they’d get caught up in the ramifications.”

Well, they did know about the ramifications actually – that’s why they had a police guard. There had been multiple death threats and the offices had been fire-bombed in the past. Bravely, the staff of Charlie Hebdo carried on, not letting the real bullies, the Islamic Extremists, tell them what they could and couldn’t write.

5. “This should serve as a lesson to other people who believe they can use the power they wield by way of dominating the media to abuse and ridicule others they believe to to [sic] inferior to them – just like in this country.”

Derek Fox here not only justifies the murders carried out, but says this is a method of shutting down free speech that SHOULD be used in the future. According to Fox, murder is an appropriate response to feeling offended. And I can’t believe he went there, but he accuses the media in New Zealand of doing the same thing that Charlie Hebdo did, which, by extension, means he thinks they deserve to be murdered too.

According to the Otago Daily Times, Fox later stood by his comments:

Mr Fox … said that if the magazine had not published gratuitous insults “they would still be alive now”.

“But they didn’t, in fact they ramped it up to sell more mags. Well they got bitten severely on the bum.”

Fox was formally a prominent broadcaster and chairman of Maori Television. It such a position it’s impossible not to offend someone, but if someone had decided to kill Fox and eleven of his colleagues in such a situation, would he be defending them from the grave? Of course not.

This is the wonderful response of cartoonist Matt Davies to the massacre:

Apparently Fox has now wiped his Facebook page. I hope this is a sign he’s gained some personal insight. Somehow, I doubt it.

Thanks to reader Jason for alerting me to Fox’s reaction.