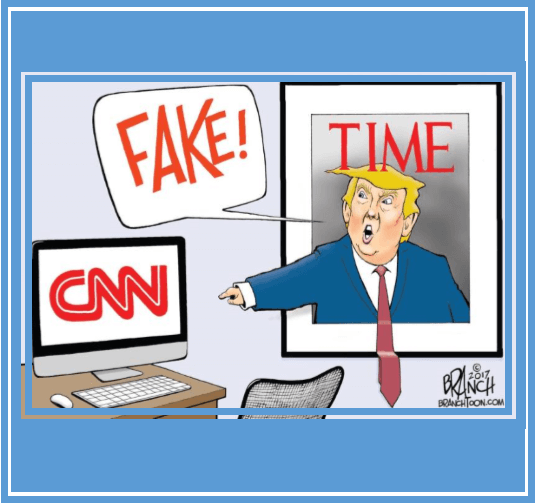 Personally, I have no problem with President Donald Trump using Twitter. It’s not using Twitter that’s the issue. Social media is a useful tool for anyone who wants to get a message out to the public. In fact, anyone in a public position is silly not to make the most of social media.

Trump himself has made excellent use of social media. He has an instinctive talent for getting the best out of it in most situations and it’s probably a bigly reason he won the 2016 US presidential election.

One of the good things about it is that it has enabled him to get his message out to his followers without a media, or even a press office, filter. Of course, that’s also one of the bad things. 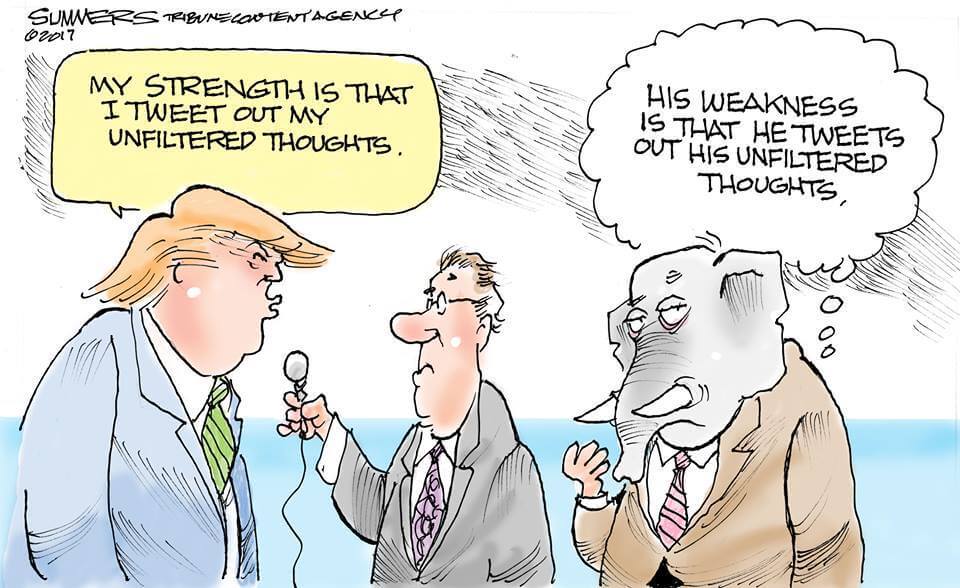 The problem with Trump’s use of social media is some of the things he chooses to put out. He told us before the election that if he won, he’d be so presidential it’d be boring. Well, we’re still waiting for that to happen. Of course, Trump, in the way only he can, thinks that he is being presidential.

My use of social media is not Presidential – it’s MODERN DAY PRESIDENTIAL. Make America Great Again!

To be fair, using Twitter and other social media is modern day presidential. Using the bully pulpit of the presidency to bully fellow USians, which Trump is wont to do, is not.

In Trump’s case, he’s also sticking it to his wife, and not for the first time. 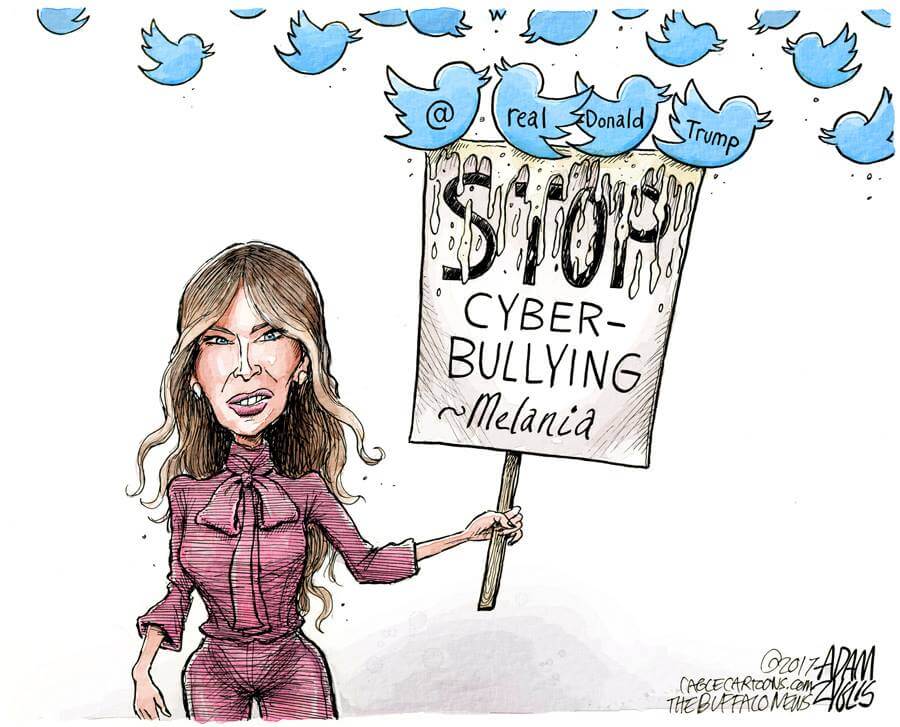 Donald Trump Versus The Media

There has always been a love-hate relationship between Trump and the media. During his campaign it’s estimated that the free media coverage from the various outlets was worth billions of dollars in free advertising. The New York Times estimates US$2 billion. Other outlets put the estimate as high as US$5 billion. 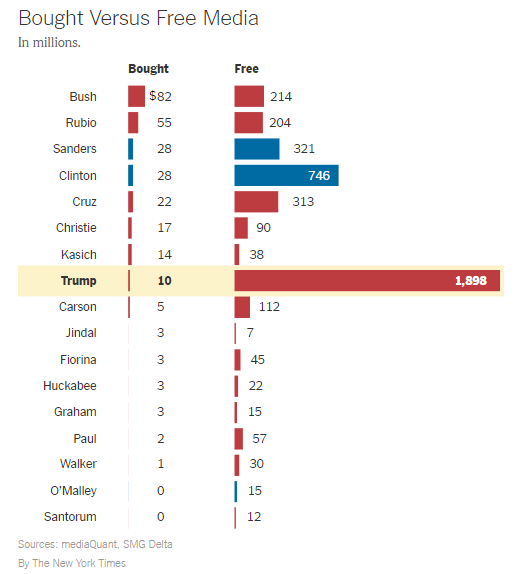 Instead of being grateful, not long after Trump made it to the Oval Office this tweet came out:

The FAKE NEWS media (failing @nytimes, @NBCNews, @ABC, @CBS, @CNN) is not my enemy, it is the enemy of the American People!

That’s not actually the original version of the tweet. He apparently thought better of including the word “sick”, which he had originally.

Quite frankly, I think that makes him the sick one. 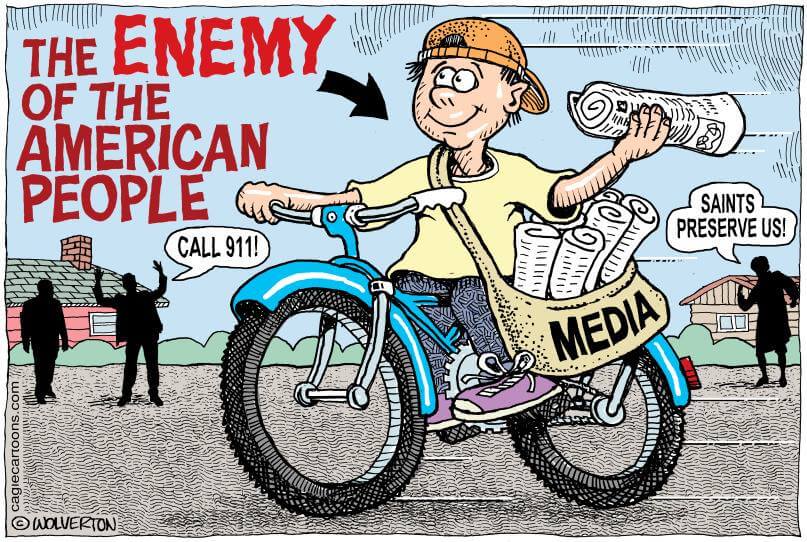 He wants all media about him, no matter what he says or does, to be positive. If that doesn’t happen, he accuses the media of lying or being fake. 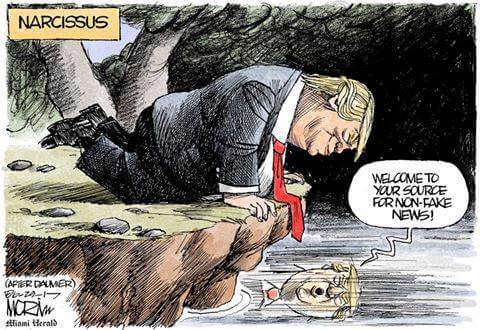 The media’s job, at least if they’re any good, is to tell the truth whatever their personal opinions. 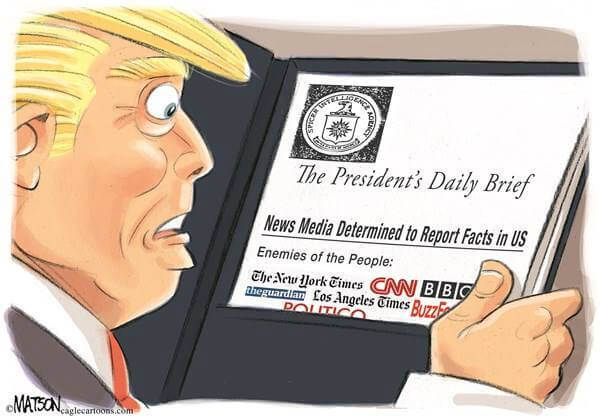 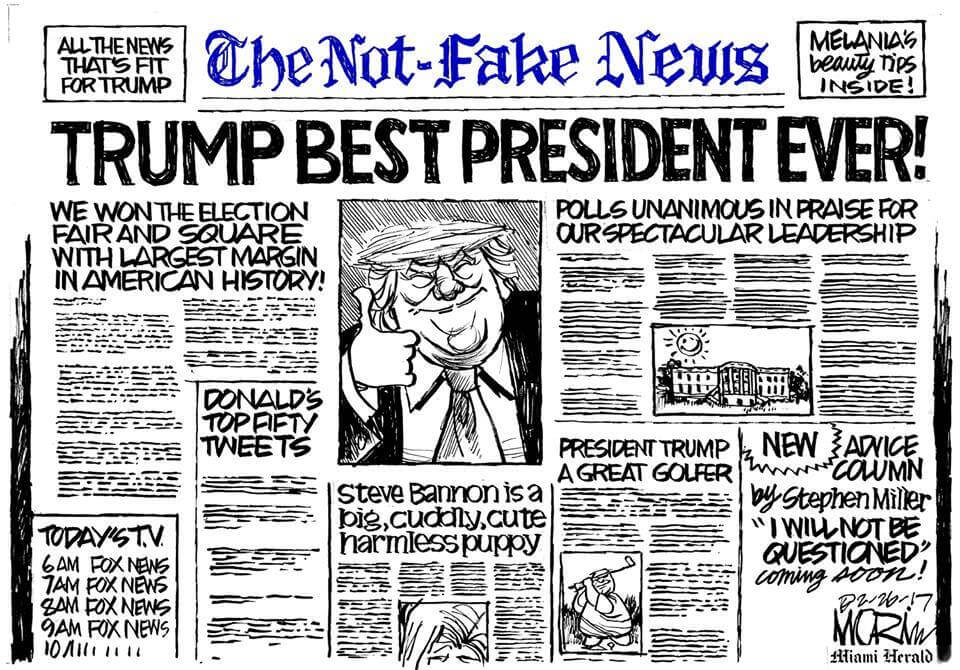 But when the polls look like this, the media has a duty to report it. 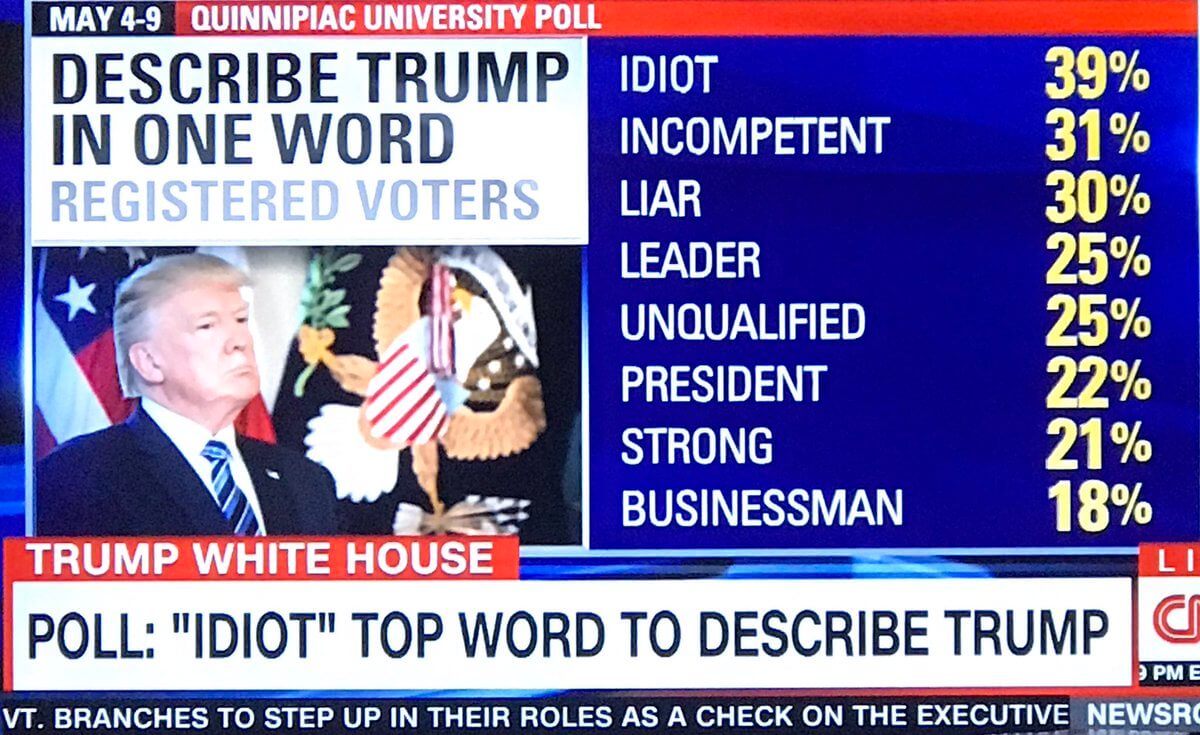 So each morning, usually while watching morning cable news, he tweets. 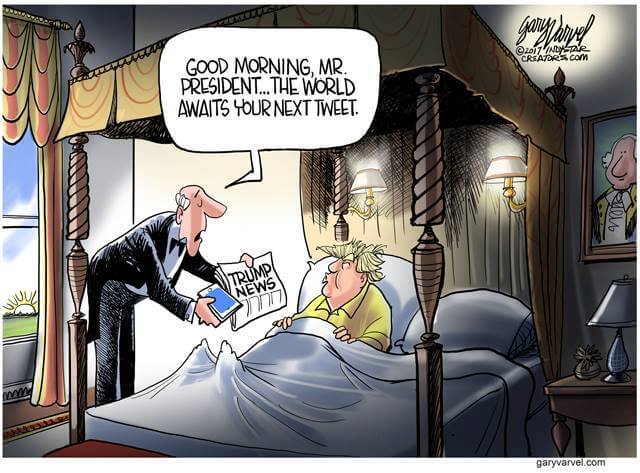 And the news outlets wait, agog.

As his deputy press secretary, Sarah Huckabee-Sanders points out, most of his tweets are actually about policy and other important issues. However, they get lost, and that’s entirely Trump’s own fault. When a president uses Twitter to abuse people, that’s far more interesting that telling them that he’s phoning Saudi Arabia, as he did today. 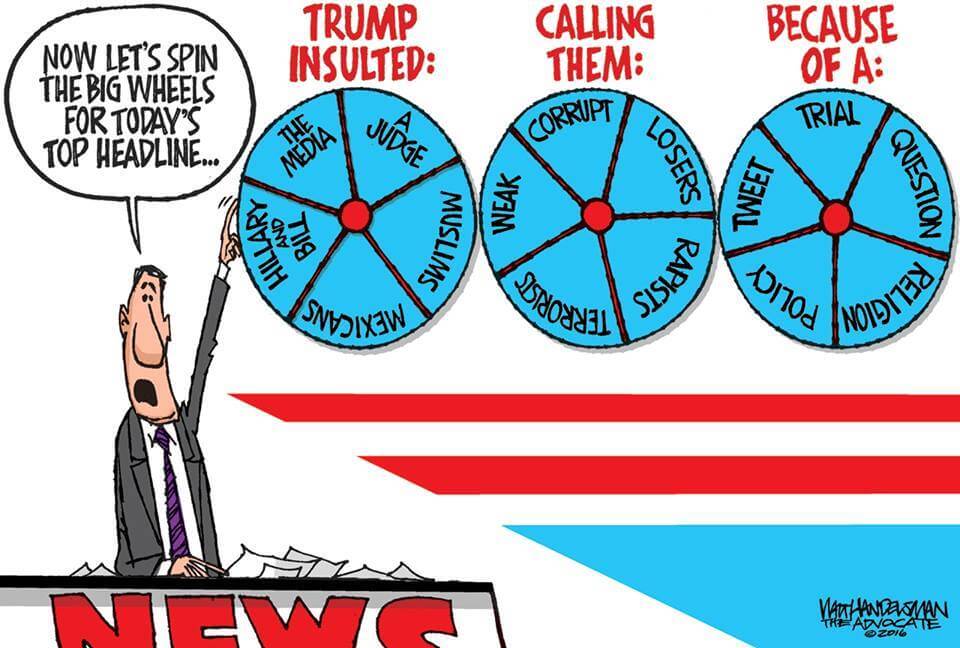 It’s now got to the stage where it’s beyond a joke. First, less than a week ago, we had to deal with a series of unhinged tweets about MSNBC hosts Mika Brzezinski and Joe Scarborough which started with these tweets.

…to Mar-a-Lago 3 nights in a row around New Year’s Eve, and insisted on joining me. She was bleeding badly from a face-lift. I said no!

Then this a day later.

Watched low rated @Morning_Joe for first time in long time. FAKE NEWS. He called me to stop a National Enquirer article. I said no! Bad show

Pointing out that the first salvo came from him, that at no point during her time at Mar-a-Lago was Brzezinski’s face bleeding, that the couple didn’t ask to join Trump’s party, and Scarborough didn’t call Trump to ask him to stop a (genuinely) fake story in the National Enquirer was meaningless to Trump. The need to attack was too great.

His ever-faithful press secretary made the usual excuses for her boss, the main one being that Trump will always hit back harder than he’s been hit. That one always makes me think of kids in the playground.

In between, there was all sorts of the sort of stuff a president should be tweeting. That there was a lot less coverage of that Trump has no one to blame for but himself. 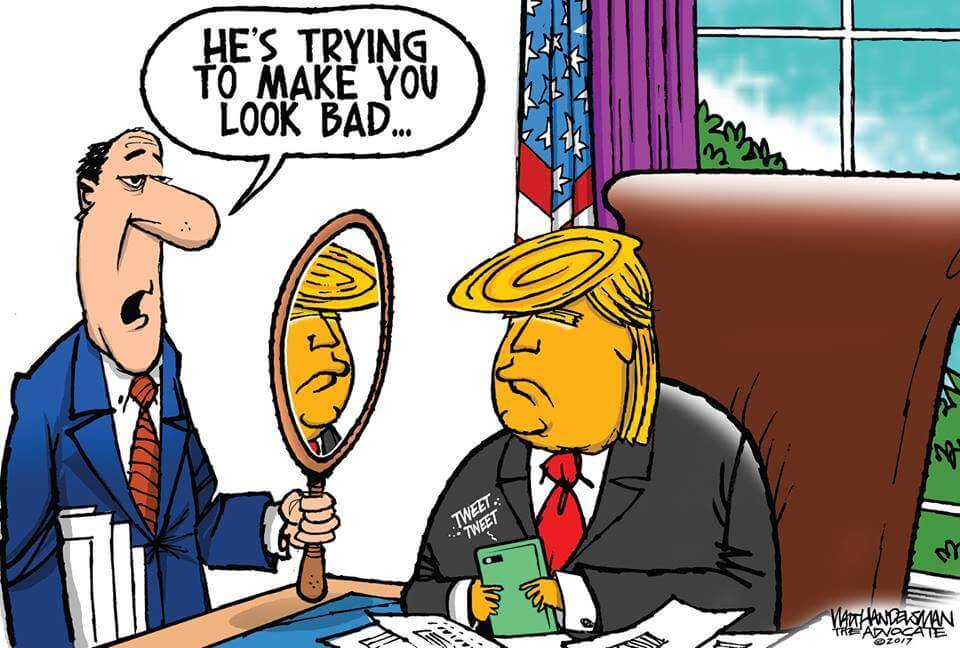 I thought the best response came from Mark Kornblau, the head of PR for NBC News and MSNBC. He said:

I never imagined a day when I would think to myself, ‘it is beneath my dignity to respond to the President of the United States’.

The fall out from this was so bad that you’d think Trump might have learnt something. That he would settle down a bit, at least for a while. But no. That’s not what real men do. Real men, in Trump’s mind, come out fighting. CNN was up next. 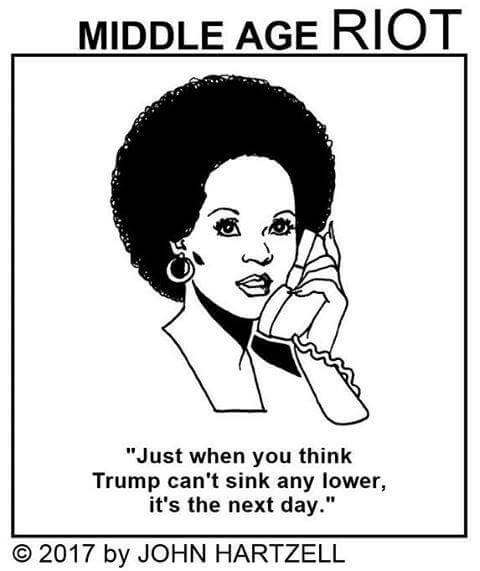 There’s been a battle going on between CNN and the president for a while; tweets like this one have been a regular offering.

I am thinking about changing the name #FakeNews CNN to #FraudNewsCNN! 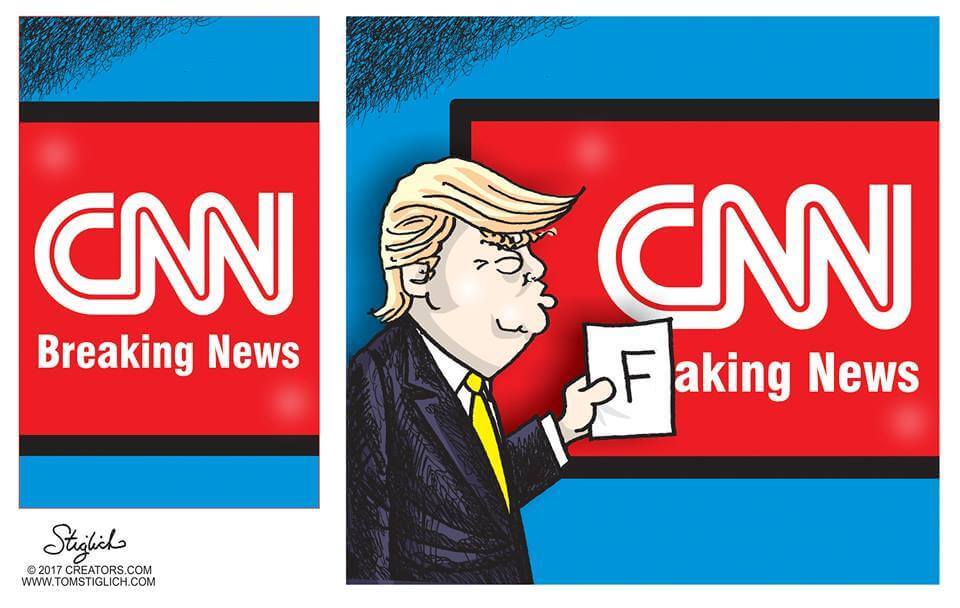 CNN has made mistakes in their coverage of him, which Trump has taken personally. However, as a regular viewer of CNN, I consider they are pretty fair in what they say. Yes, they do say negative things about him, but only when they have evidence that he has done something wrong. And when they get it wrong, there are consequences. 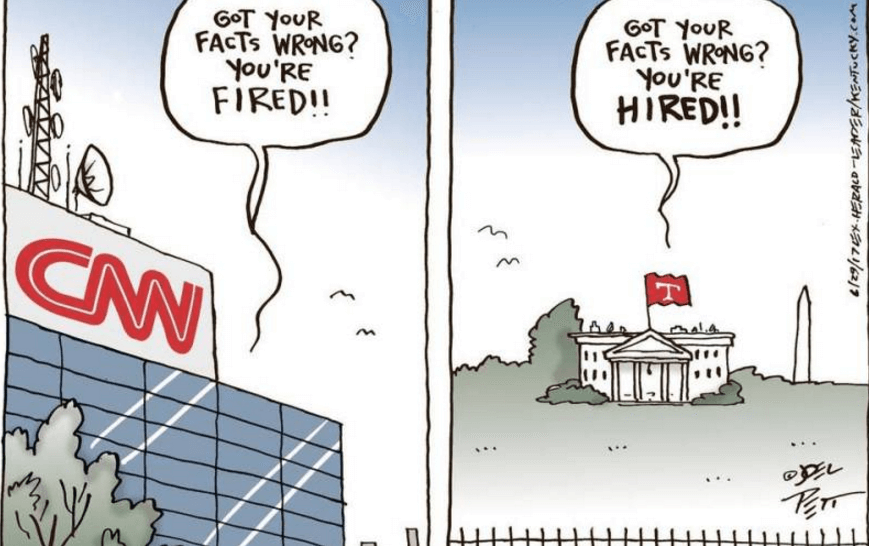 We now have CNN‘s response, and it’s hilarious!

I doubt this is over. I imagine there’s lots more to come. Trump’s presidency still has 3.5 years to go. At least. Still, it would be nice if parents weren’t in this situation. 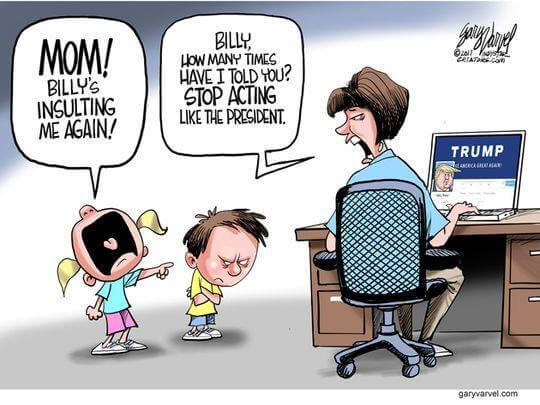 Pliny-the-Inbetween has a new cartoon up today with the comment:

PUNZLE TRANSLATION: Unlike most previous Presidents, who tended to temper responses to any annoyance, any time Trump gets a bug up his ass we get a shitstorm.

It says a lot of what I was saying above. 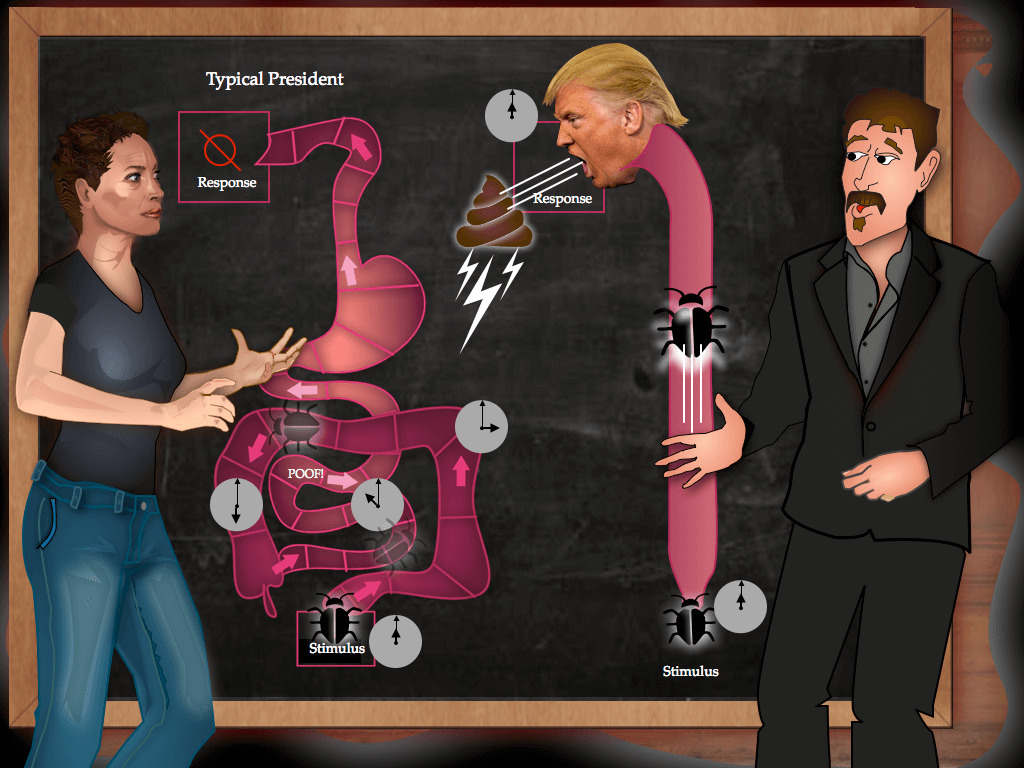