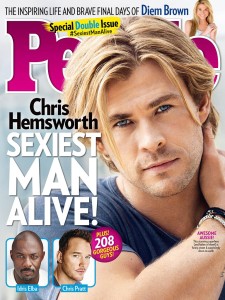 People magazine has announced it’s sexiest man alive for 2014, and it’s Chris Hemsworth, aka Thor. There’s no doubt the bloke is gorgeous. I’m assuming this photo is retouched, but I’m sure I’d still enjoy the view in real life. Now, this double-standard I’m displaying here of objectifying this man is pretty appalling, but that’s not actually why I’m writing about Chris Hemsworth.

No, what inspired me was the clip I saw of the announcement on Jimmy Kimmel Live. When he was asked the usual question at the end here is how it went:

Kimmel: Is there anyone you’d like to thank for this honour?
Hemsworth: My parents, I guess, for putting this [pointing to himself] together.

Most of you are probably saying, “so what?”. Well, by acknowledging his parents, Hemsworth, an Australian, was crediting a combination of genes and a healthy upbringing. He was not, as many would have done, giving any credit to an imaginary magic man in the sky.

We are a product of millions of years of evolution. Evolutionary Theory is scientific fact. According to Wikipedia, 42% of Australians accept Evolutionary Theory, 32% think evolution was guided by God. Almost a quarter think humans were created by God in their present form. Those results are about the same as New Zealand, but the Americans are still in trouble when it comes to Evolutionary Theory.

In the USA, the continuing strong adherence to Intelligent Design and Creationism while the rest of the world is moving to accept the reality of Evolution is clearly due to the continuing strong influence of religion. The following Pew Research Center survey from February 2009 shows how strongly fundamental and evangelical Protestants in particular continue to reject Evolutionary Theory in favour of a literal reading of Genesis: 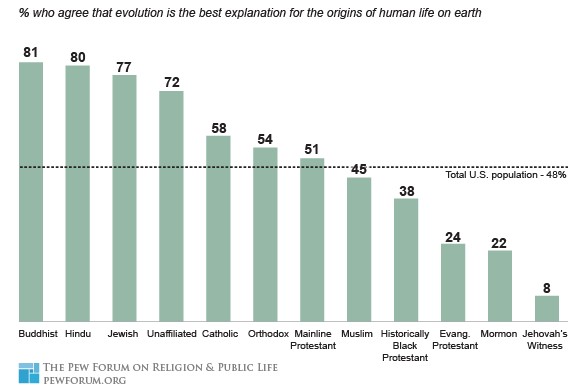 The rest of the world shows a different pattern: 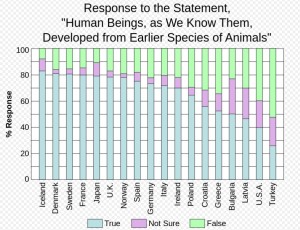 I doubt Chris Hemsworth’s statement that effectively shows he accepts Evolutionary Theory will actually change the mind of anybody, but it was refreshing to see a US show where the credit was being given where it was due, instead of to some imaginary being.