Catching Up (plus Tweets) 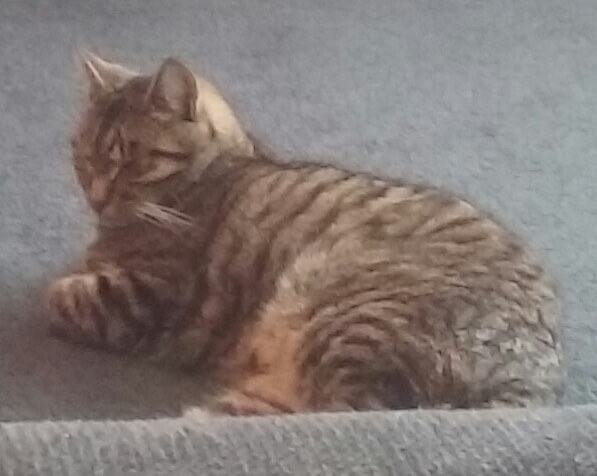 My apologies for another long break between posts. I thought I should explain, and also use the opportunity to post some videos and tweets.

I’ve been out of town visiting the doc, which always takes me a while to recover from. In addition, my electric lift armchair is broken. Coping without it is difficult. The longer things go without it, the worse the pain gets. However, the end is in sight. (How to pay for a new one is now worked out.) I haven’t got the new chair yet, but at least I know it will happen, so that helps.

I’ve got a nice piece of news too. The neighbour’s cat (that’s her in the pic above) has added me to her staff. I’ve got all the benefits of having a cat without the responsibilities, and a lot less of the cost. It’s winter here of course, and her discovery of my underfloor heating means my home is now an essential part of her kingdom. I give her cat treats, which she adores, and every now and then I give her proper food too. At the moment she’s lying on the carpet in the sun, sleeping off her latest lot of treats. Later this afternoon when the sun goes down and I put the computer aside she’ll be on my knee demanding attention. She goes home when it gets dark.

I’m writing a post at the moment about how much the standing of the US has gone down since Donald Trump became president. This is not just my personal animus speaking: the data speak volumes. I keep thinking things can’t get any worse. Then they do. We’re only eighteen months into this administration and already the damage to the world is worse than I thought it would be.

But, bad as it is for the international community, the worst damage is closer to home. We see tragedies playing out on the border every day. However, there were many of those before. That’s not to dismiss them – it’s just that we can’t blame Trump for everything that’s happening there. There’s no doubt he’s made things worse though. Situations will at least improve there at some point with the introduction of new laws, and a new administration, among other things.

USians though are the ones who will suffer long-term. A new extreme conservative on the Supreme Court has the potential to damage the country for decades. Just writing that sentence I can think of maybe a dozen negative consequences for the country of just abortion becoming illegal in around 20 states, as it likely would with the overturning of Roe v Wade. (I might have to write about that before I finish the other post!)

Before we get to the tweets, there’s a new short film from New Zealand’s Martin Heck. I’ve shown his films before. Mostly he does beautiful time lapse films. This one is a little different, but just as beautiful. Do yourself a favour and view it on full screen.

Will there ever be an end to the stories of the incompetence of #Trump in the White House … pic.twitter.com/t8EZSKn8Ae

So Sean Hannity thinks this is all bad stuff. All looks normal to me – pretty much standard for most NZ political parties.

Sean Hannity just presented this agenda as a negative pic.twitter.com/mYoByIRyr5

The only thing more uplifting than @Ocasio2018‘s victory was her victory speech pic.twitter.com/47Qd2pKi3N

I also find it fascinating that this Congress exercises no meaningful oversight on any Department of this Administration other than the single Department that is investigating Donald Trump’s ties to Russia. Weird, right? https://t.co/dn78oGUYuC

On the legalisation of Trump’s Muslim ban.

‘This is inhumane, unconstitutional, and straight up wrong. We are talking about the legal discrimination of people based on their racial and religious affiliations.’ — Zahra Haider pic.twitter.com/59ghWfJYZQ

Well, it’s an argument. Not sure it’ll get anywhere though.

– Trump lost the majority of the votes to get elected

– He got elected b/c Russians helped

– He’s under investigation for that Russian attack

– He wants to appoint a SCOTUS judge who will protect him from that investigation.

Will GOP go along?

If Roe v Wade goes because of the appointment of an extreme conservative SCOTUS justice, this is just one of the likely consequences.

In response to the above tweet, I posted this pic for those who don’t get the symbolism … (but I can’t find the tweet!) 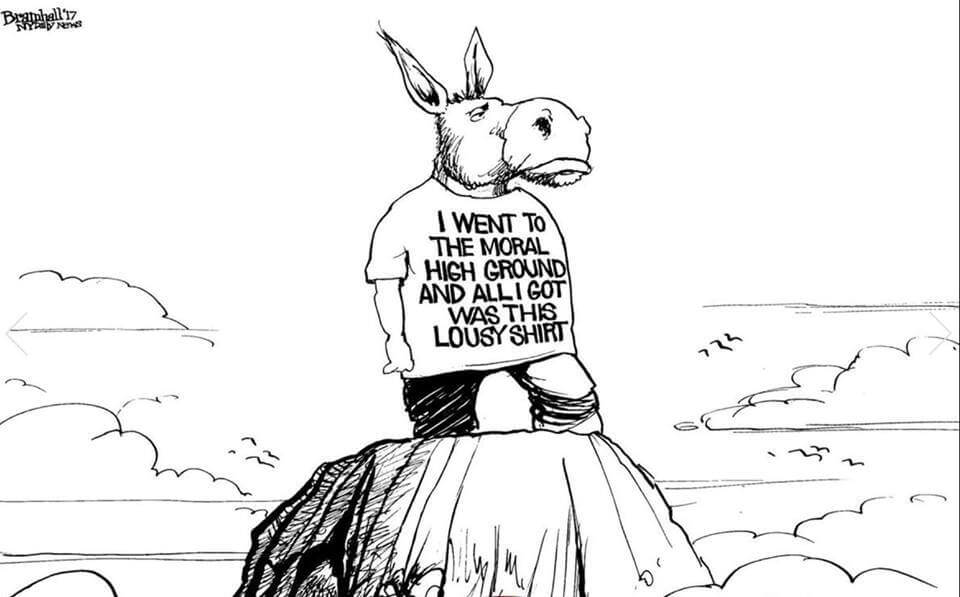 I need to separate this out. I’m still on the side that says we liberals have to retain the moral high ground. The Right uses a false equivalence argument when it criticizes the Left for such things as asking Sarah Sanders to leave that restaurant. The things the Left is doing are nowhere near as bad as what the Right did, does, or has threatened. For example, I’ve never heard anyone on the left threaten actual civil war in the way I have heard the Right doing.

However, I note many of my friends whose opinions I respect have left me behind on this. They do think asking Sanders to leave a restaurant and peacefully protesting other Trump administration members when they’re at home or dining with their children is fine. I can see their arguments, and agree with some, such as the ones in tweets below (via Ann German).

I’m not there yet though. (Maybe it’s because I got lucky and was born in New Zealand.) But, I still want to give voice to the arguments, or parts of arguments, I do agree with.

This ghastly bitch (Priscilla Giddings) is a GOP representative. This Facebook post is apparently okay. It’s only liberals who have to behave well.
(Via Ann German.)

Students came to peacefully protest the Idaho State GOP Convention. Rep. Priscilla Giddings took a picture with them and posted it to FB with the following caption: pic.twitter.com/zbjLySRtbP

I can’t get over that people wrote this stuff and thought it was okay.
(Via Ann German.)

“I have almost [concluded] that the Negro’s great stumbling block…is not the White Citizen’s Counciler or Ku Klux Klanner, but the white moderate…more devoted to ‘order’ than to justice; who prefers…the absence of tension to…the presence of justice”https://t.co/QIksRFF158

This is an excellent article. Again, I don’t agree with everything, but it’s good and I recommend it.

Milo Yiannopolous is an A$$ho£€ Tweets

It seems like he had nothing to do with this, but it says something about the sort of person he attracts.
(Via Ann German.)

When Milo goads his fans to violence, they listen. Last year, a couple went to a Milo event w/the intent to harm protesters. They brought a gun & shot Joshua Dukes, 34, who was critically injured. #DeportMiloY #RightWingTerrorism #MiloYiannopoulosShooter https://t.co/drYqsN05ir

A child accidentally fired a gun at Ikea. We don’t need more lies about how guns make you safer, we need fewer guns. — @IgorVolsky pic.twitter.com/baWemmoomx

There have been nearly 50 mass shootings in the U.S. in June, including the shooting today that killed 5 people at a Maryland newsroom pic.twitter.com/dQi0Nz0jWI

Some more brave women in Iran, fighting for the right to uncover their hair in public. It’s the 21st century, and there are women who don’t even have the right to feel the wind in their hair!

Under arrest for not covering their hair. These vans of morality police patrol the streets in places where women are more likely to stand up for their rights, like universities.

Scene of the morality police’s brutality with female university students. Such scenes are part of our daily life. #WhiteWednesdays pic.twitter.com/tPrBdw4IGJ

Women have the right to drive in Saudi Arabia now, but they still have a male guardian for life. They effectively have permanent status as a minor.

This Saudi woman started #Miles4Freedom, a campaign calling for the release of activists who fought for women’s rights to drive in Saudi Arabia. pic.twitter.com/0tI3CeQVdX

In my experience, most police are great people. I assume that’s the same in the US as here in New Zealand. However, it’s a profession that can attract the wrong sort of people. (I know they try to weed those sort of people out before they hit the streets here.) It’s also a profession where one bad officer spoils things for the majority.

Police tased this unarmed Black man while he was sitting on the curb and attempting to follow directions pic.twitter.com/N5VCIFicXF

I love illuminated manuscripts. It’s a dream to own one, though I know I never will. So too bad if you don’t like them, you’re going to get tweets from me from time to time.

Planning a picnic? Don’t forget the cushions or the amazing hats. The Duke of True Love shows us how it’s done, from Christine de Pizan’s Book of the Queenhttps://t.co/oA0KvZ9X20
Harley MS 4431, f. 145r pic.twitter.com/dGj5vvvUVO

As regulars know, I’m a bit ignorant when it comes to science. I’m catching up in my reclining years! I didn’t even know about these things had a special name. Science is cool!

Sphericons are unique solids that roll in such a way that every point on their surface comes in contact with the plane. Solids from the sphericon family all have one side and two edges. Each sphericon is based on a regular polygon: this is from a hexagon https://t.co/ORgMqrlL9Y pic.twitter.com/g8rvhHnf9y

I got all today’s from the same source – a new Twitterer I found. I recommend a follow.

For goats, being governed by the laws of physics was never an option. pic.twitter.com/R6iYcaWbLx

Don’t tell me their feelings aren’t the same as ours!

The pure excitement and joy when rescue chimp sees his old caretaker.

This monkey was kept on a chain and forced to perform in a circus for 8 years. He can’t stop hugging his rescuers — and he’s about to meet his first monkey friend ???? pic.twitter.com/sQHaWDv2WZ

What a great job!

Three babies admitted a little while ago are growing fast @SWCCHedgehogs! ???????? pic.twitter.com/x9xja3vxCd

What a cool bird!

Exclusive footage of me leaving work for the weekend.#FridayFeeling pic.twitter.com/Q8eYRJBp3Z

I know it’s mean, but I laughed anyway!

Dear sir, thank you for your application for the position of Branch Manager. I regret to inform you that on this occasion you have been unsuccessful. pic.twitter.com/8MSLbP1yvy

A dog put to good use! (I do like dogs really. Just not as much as cats.)

There’s a new short film from Simon’s Cat. It’s hilarious, as usual. It made me laugh out loud anyway! I give you: ‘Simon’s Cat: The Snip’.

I think this is the best Cat vs Mirror video I’ve seen yet!

When your hair is majestic and fabulous.. pic.twitter.com/IVhq716VWI

What to do with five kittens?

Methinks there’s a power struggle in this household!

The book title is ‘I Could Pee on This’.

Some light reading before bedtime ????

When you think you lost your dad furrever …

A fun one to finish on …