Campaigning in the USA 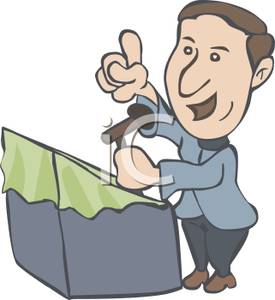 I’m in the middle of writing a post about the benefits of a single-payer healthcare system. The inspiration for that came from a CNN Town Hall with Senator Kamala Harris (Dem., California) last week. Senator Harris is running for president in the 2020 election. It’s almost two years until that election, and already multiple people are declaring their candidacy. More than that, this is all completely normal. This made me ponder campaigning in the US; perhaps the whole process of campaigning is a big part of what’s driving the extreme partisanship in that country.

Anyway, rather than fill up the other post with my musings on the topic, I thought a short, separate post would do the trick.

As a result of all these people running for president, the media will be focusing on every little thing they say and do. And, because of the nature of the current president, he will also be commenting at length. I suspect it leads to more partisanship than there would be if there was a limit to campaign time. Here’s why.

The Job of a Politician

A politician’s job is helping to run the government on behalf of ALL those in their constituency. Doing that well requires compromise with and among people with multiple points of view. However, when they spend so much time publicly defining their differences, that kind of cooperation is all but impossible.

Even once an election is over, the rancour can’t just go away overnight. Politicians know that campaigning is par for the course. Arguing over policy positions is usually something politicians can get over. However, if politicians use dirty tricks to try and win, that changes things. Once it gets personal, that’s another matter and a longer campaign is more likely to lead to dirty tricks. 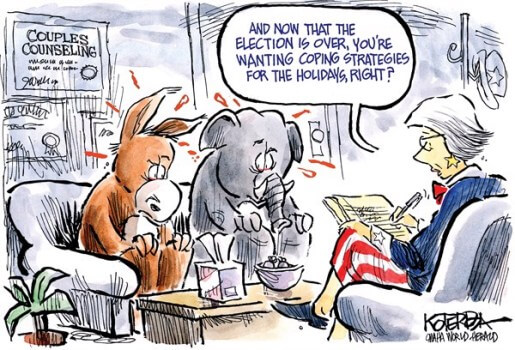 The US has few limits on campaign funding. The source of candidates’ financial support can also be a very sore point. Some candidates only manage to continue campaigning because of multi-million dollar donations from one or two people. (Sheldon Adelson’s support of Rick Santorum comes to mind.) They have no real popular support, but they appear to have because of the amount of money they have in their campaign coffers.

Therefore, candidates who have broad support from people with less money available to support candidates must often stop campaigning while those with a few wealthy supporters can carry on. Those remaining then pick up votes from those who are more popular but had to leave the race. That causes ongoing resentment with the colleagues of a politicians who had to leave the race. Or, they simply may find it difficult to work with someone they feel doesn’t deserve to be in government. 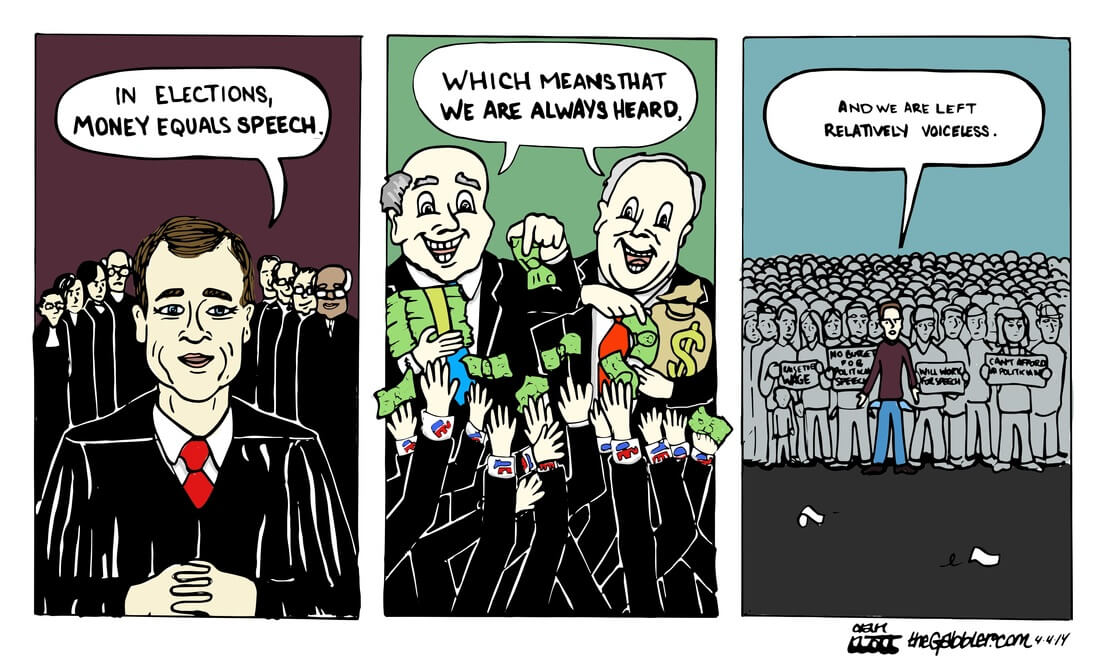 As with dirty tricks, it’s the feeling that a candidate may have won unfairly that makes it more difficult to work with them. This issue was exacerbated in the US with the SCOTUS declaring Citizens United to be law in 2010. The Federal Electoral Commission was in opposition to the GOP-sponsored Bill, which basically declared corporations to be people. As such, big business could donate to political campaigns in a way they hadn’t been able to before. 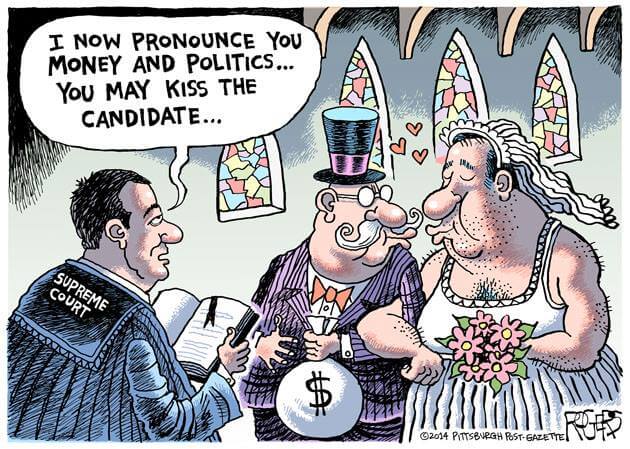 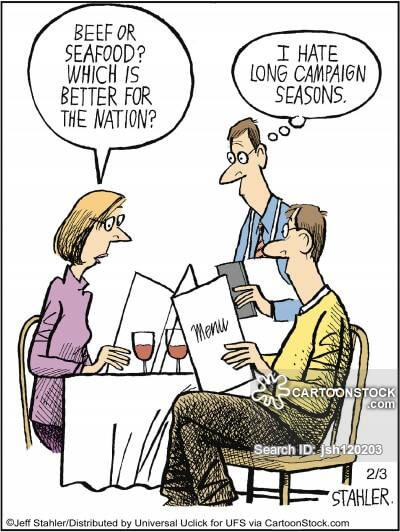 ‘Beef or seafood? Which is better for the nation?’

In most democratic countries, both these situations aren’t as serious as in the US. The majority have a legal limit on the time when politicians can engage in electioneering. In New Zealand (iirc – correct me if I’m wrong) it’s three months. Some other countries allow even less time. (I do note though that the US is a huge country and the way it picks its candidates is more time-consuming than most. Therefore, it would need more time than most of us to choose its leader. But, I suspect two years is still way more than is really necessary.) With a shorter election season there are at least two advantages.

Firstly, politicians have less time to, and are less likely to, engage in dirty tricks. Secondly, because the adversarial time is shorter, it doesn’t take as long to get over. Therefore, it’s a shorter time until politicians are ready to work together. It’s easy to say they should do this anyway, but they are people with feelings too.

Many countries, New Zealand among them, also have campaign spending limits that politicians must stick to. Candidates can and do lose their seats if they are found to be in breach of those limits. This means a potential candidate who is popular but not wealthy is able to run for election and stands a genuine chance. It also means, of course, that special interests (including business interests) have less chance of influencing politicians.

There isn’t a country on the planet where the electoral system couldn’t use some reform to make it better and fairer. There is also a lot more that I could say about unfairness in the US system. However, as it’s more than 22 months until the 2020 election, I have plenty of time to write about those. I just had a need to get this point out of my system.

Thanks so much for your kindness and patience over the last few months. Things are getting better, but it is a slow process. I especially continue to be absolutely blown away by the generosity of the reader who paid for a new chair for me. I don’t know where I would be without it.

Because I’m still working very slowly, I’m largely working on posts that aren’t time sensitive. That way I can do a little at a time until they’re ready for the site. There are several that are fairly close to completion, and hopefully you won’t have to wait too long for them.