Bias in Reporting about Atheism in the United States 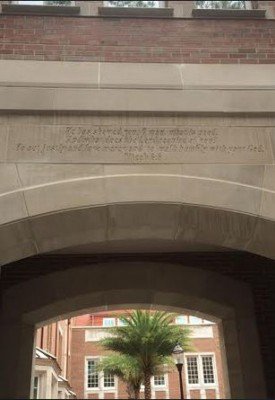 I see reports like this frequently in the US media, and they annoy me intensely. The latest is called Pro-Atheism Group Harasses University Over Bible Verse etched on it’s ‘Heavener Hall’. It’s in a publication called College Fix, which describes itself as “Your Daily Dose of Right-Minded Campus News from Across the Nation” (their emphasis).

I probably shouldn’t have read the story, but I did, and there were too many irritations to fit into a tweet, and I had to let some of it out, so here goes.

To start with, I wondered who this “pro-atheist group” was. That question was answered in the first paragraph – they’re talking about the Freedom From Religion Foundation. Most of you probably already know who they are, and dismissing them as some “pro-atheist group” gives you some idea of of the tenor of the article. The FFRF is an United States non-profit organisation dedicated to promoting and maintaining the constitutional principle of separation of church and state in that country.

Following a request by two student groups at the University of Florida, (Gator Freethought and Humanists on Campus), the FFRF wrote to the university’s president on 13 April requesting the Bible verse inscribed over the door of a new building on their campus be removed. They pointed out that to display religious material in such a way on a government building is illegal in America, and provided the legal precedents concerned. Apparently, in the eyes of College Fix, asking the university to follow the law is considered “harassment”.

The new building, Heavener Hall (named after a local businessman Bill Heavener), is a state of the art business school built, built in what College Fix called the “Collegiate-Gothic style at the Gainseville campus. The Bible verse displayed is:

He has shown you, O man, what is good. And what does the Lord require of you? To act justly and to love mercy and to walk humbly with your God. (Micah 6:8)

As the FFRF points out in their letter, this verse is a particularly ill-chosen one:

Setting aside the inscription’s illegality, its selection is in poor taste. Chapter 6 of Micah is a scathing indictment of the tribe of Israel. God declares that neither animal sacrifice nor human sacrifice will appease him, promises Israel to “make you ill and destroy you”, and swears to kill infants: “what you bring to birth I will give to the sword.” The very passage before the inscription, Micah 6:7, contemplates killing one’s own child to obtain absolution: “Shall I offer my firstborn for my transgression, the fruit of my body for the sin of my soul?”

The president of the university, Dr Kent Fuchs, is not responding as if it’s harassment, at least publicly. A spokesperson for the university told College Fix:

… the University of Florida is committed to complying with the laws that apply to public institutions. We are carefully reviewing the letter received from the Freedom from Religion Foundation.

This is, of course, a perfectly reasonable response. College Fix couldn’t leave it there though. This was another example of how atheists are all terrible people, so they had to attempt to show the FFRF was wrong and unreasonable. After making a few comments that the Supreme Court hasn’t always interpreted the law consistently but unable to come up with any precedents to counter those provided by the FFRF, they checked out the University of Florida campus newspaper the Alligator. The Alligator had a comment from a campus minister:

… that the verse is “something that’s motivational, inspirational, and it’s probably something that we hear every day and don’t realize it comes from the Bible”

Well, it sounds like the minister, Jarvis Henderson, didn’t even know what the verse was when he commented on it, and as FFRF pointed out, “motivational” and “inspirational” are not the first two words that come to mind when you’re reading about one of the Bible’s many episodes of genocide.

The FFRF states there have been more and more instances of people and groups trying to force Christianity and the Bible into American public life in recent years. They’re all illegal. But, it seems that in much of America, it is the group on the side of the law that is consistently demonized instead of the one committing the crime.

This is not just about atheists either. As the student groups who originally wrote to FFRF stated:

We, as students and staff of the University of Florida, feel that the quote promotes Judeo-Christian beliefs over all other beliefs on campus, and that this alienates members of the University of Florida community, such as ourselves, who do not hold the same beliefs and encourages discrimination against ourselves and other individuals of different faiths, creeds, and beliefs.

All students should be able to feel welcome at their university, whatever their background, but every time a student who does not accept what is written above the entrance to the new Business School, there’s a chance they will feel fundamentally excluded. That’s simply not on. To then attack the group that calls the university out on this, especially when what the university has done is illegal, is another example of the behaviour of those promoting America’s imaginary War on Christianity.