The Authoritarian Left and Misdirected Animosity in the Atheist Community

The worldwide atheist community is growing every day. In northern Europe, Japan, Canada, Australia, and New Zealand this trend has been obvious for some time. The 2015 Pew Research Center Report ‘The Future of World Religions: Population Growth Projections 2010-2050‘ says:

During the next few decades, the number of religiously unaffiliated people around the world is projected to grow modestly, rising from about 1.1 billion in 2010 to a peak of more than 1.2 billion in 2040 and then dropping back slightly. (Page 81.) … 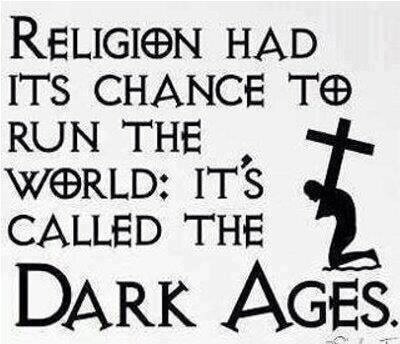 The change is causing some growing pains in the US though, and the religious right is fighting tooth and nail to maintain power. At the moment they’re succeeding. The election of Donald Trump as president and the domination by GOP candidates across the board is causing some angst in both the atheist and secular communities.

The effect the last election will have on the US Supreme Court in particular is worrying. Trump’s nomination to replace the late justice Antonin Scalia is judge Neil Gorsuch. Gorsuch is even more conservative than the man he’s replacing. We can expect him to contribute his extreme right-wing religious and political views for the next thirty years. This, at a time, when the views of USians are becoming more liberal all the time.

The trend towards atheism is set to continue and the pace of change is likely to increase, but short-term there will be ideological battles. 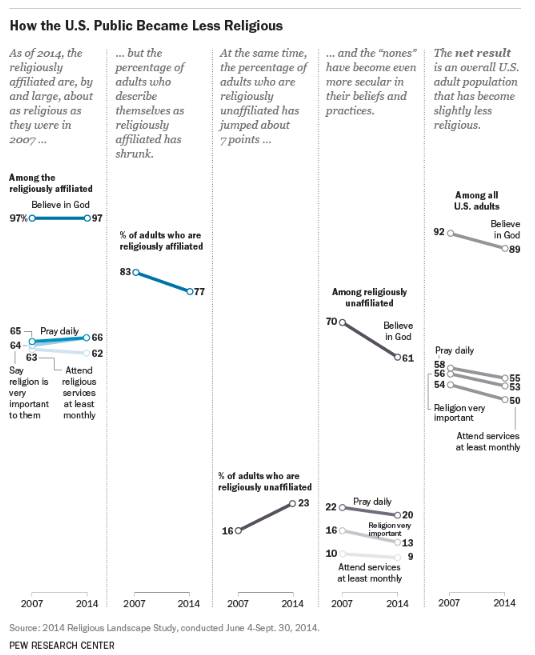 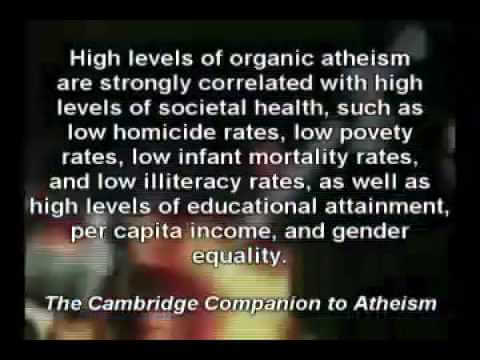 Any dictionary will tell you that all atheist means is you don’t believe in God or gods. However, like religious groups, atheists are, on average, more likely to hold certain values.

In 2009 Phil Zuckerman, a sociology professor at Pitzer College (and later founder of the Department of Secular Studies) wrote ‘Atheism, Secularity, and Well-Being: How the Findings of Social Science Counter Negative Stereotypes and Assumptions‘. His analyses include:

… when we actually compare the values and beliefs of atheists and secular people to those of religious people, the former are markedly less nationalistic, less prejudiced, less anti-Semitic, less racist, less dogmatic, less ethnocentric, less close-minded, and less authoritarian. 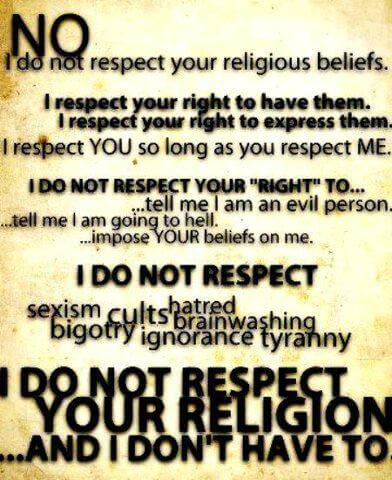 In the United States, atheists are far more likely to vote Democrat than Republican as the graph below shows. We tend to be feminists, pro-marriage equality (92%), anti-racism, and pro-choice (87%). As well as being atheists, many are also anti-theist.

Within the atheist community, those opinions are fairly uncontroversial. There are people who don’t hold them; I’ve come across several extreme misogynists who are atheists for example. However, most atheists are liberal (56%) or moderate (29%) and thus we have high levels of representation amongst the extreme left. 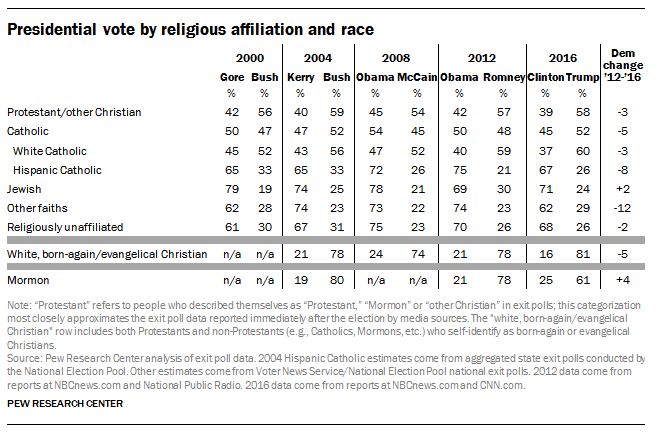 The Rise in Authoritarianism

As well as a rise in atheism, there has been a noticeable rise in authoritarianism worldwide. We can thus expect there to be some overlap.

Vladimir Putin is using nationalism to support his brand of authoritarianism with increasingly scary results. In Britain the support for Nigel Farage’s party UKIP is rising. In France Marine Le Pen of the National Front is increasingly popular. Germany had the National Democratic Party, Greece has Golden Dawn, Sweden has the Sweden Democrats, Poland has the Law and Justice Party, and Hungary has Jobbik. There are literally dozens of others.

The best known authoritarian in the world today though is Donald Trump.

Authoritarianism in the United States

It is attraction to authoritarianism that marks out Trump voters more than any other characteristic. Media outlet Vox surveyed US voters last year. They reported:

However, there are authoritarians on the left too. From the same article:

But Hetherington also noticed something else: A subgroup of non-authoritarians were very afraid of threats like Iran or ISIS. And the more fear of these threats they expressed, the more likely they were to support Trump.

This seemed to confirm his and Suhay’s theory: that non-authoritarians who are sufficiently frightened of physical threats such as terrorism could essentially be scared into acting like authoritarians.

This is what I think is happening to some on the left. They are scared by politicians like Trump will cause them to lose the gains made in so many areas of society in recent years. Thus, they are acting like authoritarians. Within that group, we’re seeing a loss of respect for a fundamental liberal value: freedom of speech.

Even worse, some leading atheist voices, like Dan Arel, are excusing violence. Recently, during an on-camera interview, leading alt-right voice Robert Spencer received an elbow in the face. Such actions are clearly unacceptable but many on the left, including Arel, made excuses for the behaviour. He, and they, considered the fact that Spencer holds (admittedly) offensive views excused the behaviour. (See Ken White’s post ‘On Punching Nazis‘ at Popehat for a comprehensive view on why Arel is wrong, though it should be obvious.)

Using physical violence against an opponent gives them the opportunity to claim martyr status. There’s nothing an alt-right activist likes better than being able to go on Fox News and point out bad behaviour by the left. The number of times I’ve heard the oxymoron “illiberal liberal” on Fox is too high to count. I heard it again yesterday following the UC Berkeley protests. 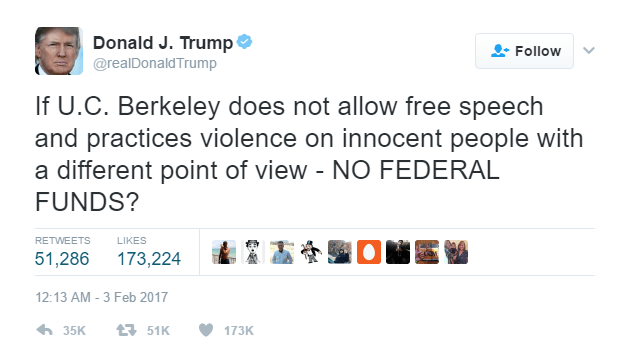 Most Fox News commentators were reliably supportive of Donald Trump’s stance on the violence that erupted in the wake of a speaking invitation to Breitbart Editor Milo Yiannopoulos. There was one though that gave a clear and fair statement. Charles Lane of the Washington Post said:

The administration worked with the college Republicans to provide a free forum for Milo, and protected it with university police drawn from the university’s system from all around the state. Then, it provided a space for its students to protest peacefully, which they did, until 150 people dressed in black – the same kind of people who wrecked Washington during the inauguration – showed up with their crowbars and created the mayhem from the outside, which the University of California then repressed, as it should, to restore law and order.

And in other words the University of California upheld free speech and law and order through use of its resources in exemplary fashion. And its reward for that was to be threatened with a cut-off of federal funds by the president of the United States.

Back on campus though, a female student and Trump supporter, and again during an on-camera interview, was pepper-sprayed in the face. Such actions are simply unacceptable.

Although, as far as I know, there’s been no physical abuse, there’s a large number of far-left atheists attacking leading atheist voices via social media. I’ve written about the ongoing attacks on Sam Harris, Richard Dawkins, and Jerry Coyne on several occasions. I devoted a whole post to supporting Ayaan Hirsi Ali.

It looks to me like Dan Arel wants to make it with the authoritarian crowd too now. His 10 January post ‘How classical liberals helped normalize white nationalism and elect Donald Trump‘, attacking Jerry Coyne and Dave Rubin, must be one of the most ridiculous attempts at a take down I’ve ever seen. If you’re going to expose someone in writing, you really should make sure you get your facts straight, and Arel was simply wrong on every point. His characterization of Coyne’s positions on almost every topic was incorrect, and the flaws in his logic beggar belief.

Coyne himself wrote an excellent response: ‘Dan Arel goes full regressive: accuses “classical liberals” (i.e., me) of “normalizing white nationalism”. It was Arel’s own followers though who wrote some of the most scathing responses to Arel’s post.

You,sir, are an ignoramus of the highest order.

YOU helped get trump elected. For months ahead of the election you went on and on about how your precious principles would not allow you to vote for hillary despite her running the most progressive campaign in american history.

YOU elected trump [and] YOU decided that the suffering of women gays, muslims, latinxs was an acceptable risk copared to you having to lower yourself to casting a vote you weren’t 100% comfortable with You don’t get to criticize anyone on the left ever again.

Dan, you’re fearful and angry- an understandable reaction to Trump’s election and one shared by people like Coyne and many others. However, you are responding in a foolish way, lashing out at people you deem to be insufficiently pure allies, and refusing to consider your own failings. This will not help, it will only set you up for more disappointment if you can’t rationally analyze your problems.

It’s not Jerry Coyne you have to worry about; he, like a reasonable person, can weigh up the follies of the left and the right and judge that Trump is a disaster whose real harm far surpasses the ugliness that can be found on the left. However, for people genuinely on the fence, seeing your denial and hypocrisy towards people who should be your compatriots can push them to the other side. It doesn’t matter if you or I think that is a foolish decision, it doesn’t matter if it isn’t fair, it is reality and you have to deal with what is, not what you wish could be. …

Arel has set himself up as the ultimate arbiter of who is allowed to speak and who isn’t. Heil Arel!!

These comments are just the most recent. There are dozens more the same. I have to say, it renews my faith in my fellow atheists. If you’re a liberal atheist, as most of us are, that means you support freedom of speech. Most importantly, you support it for everybody – not just the people you agree with. 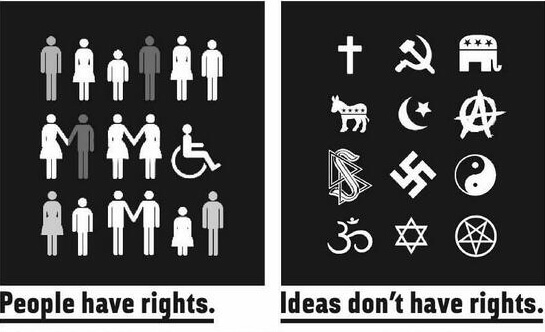 I’m in my early 50s, and just in my lifetime the improvements in so many areas of society are amazing. There’s less racism, sexism, homophobia, anti-Semitism, and many other forms of bigotry and prejudice. There’s still a long way to go, especially in the developing world and more religious countries.

As atheists we rely on data and evidence to support our case. We know that the world is better off when society is more accepting of all views and all people. To many we’ve made the case that, for example, equality for women improves the lives of everybody. There are still plenty out there who haven’t learnt that. The way to change their minds is through persuasion, not shutting down discussion. We have the better arguments – let’s use them.

The Last Word Goes to Voltaire 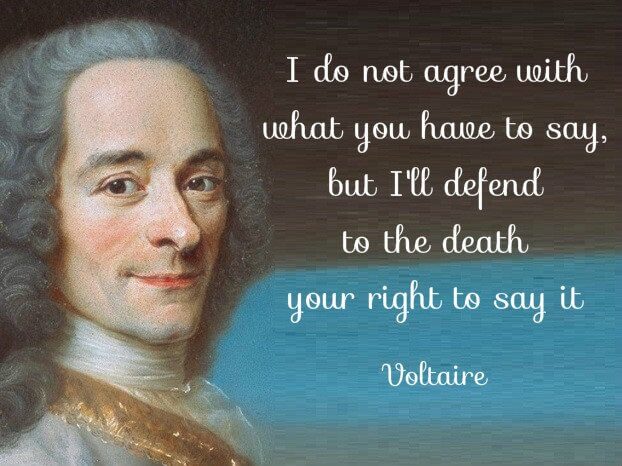 I re-read this post on 2 May 2017, and discovered a helluva lot of typos and a couple of unclear sentences, so I corrected them. There’re probably more errors I haven’t noticed yet. Please feel free to point them out in the comments below. Heather.