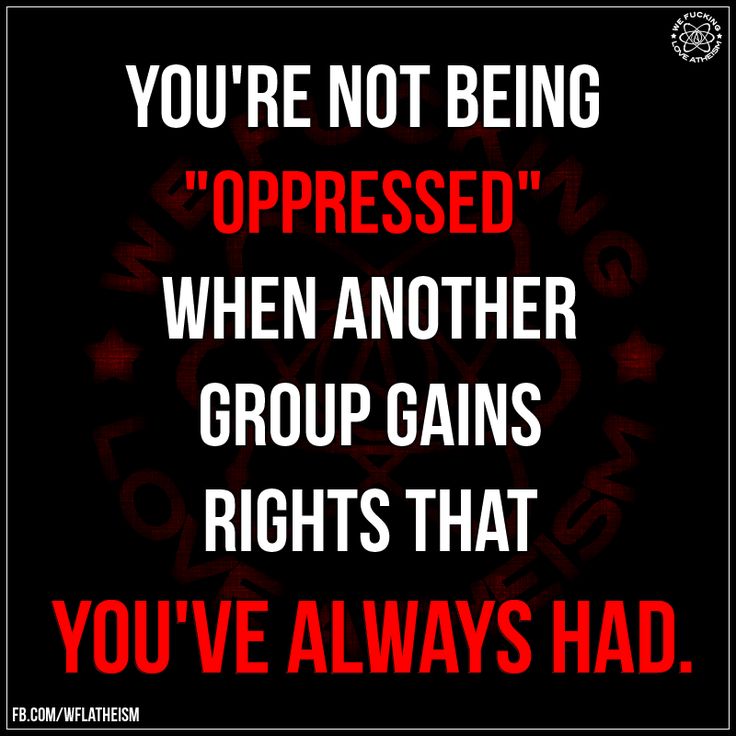 Prior to the latest census in Australia (2016) the Atheist Foundation of Australia ran a campaign. It was to urge people to mark the “NoReligion” option on the census form. The number that did so was 29.6%, almost double the 16% of 2001, just fifteen years earlier. Christianity is still by far the largest group at 52%. Within Christianity, Catholicism is still the biggest group at 22.6%. While this is a drop, it’s not much of a drop. Personally, my own expectation was that the child sex abuse scandal there would have a bigger effect. It seems Aussies are managing to keep a tight grip on their delusion despite proof of the sexual abuse of thousands of children and its cover up by the Church.

Although Christianity is still by far the biggest group, a whole lot of Christians are in a real tizz! Apparently, in a column in The Australian, columnist Jenniefer Oriel says atheism will lead to a breakdown in liberal democracy. I can’t read the column because The Australian is only available by subscription on-line. The news comes via another Australian media outlet, Christian Daily.

This is the religious profile of Australia on census day from 1966 to 2016. 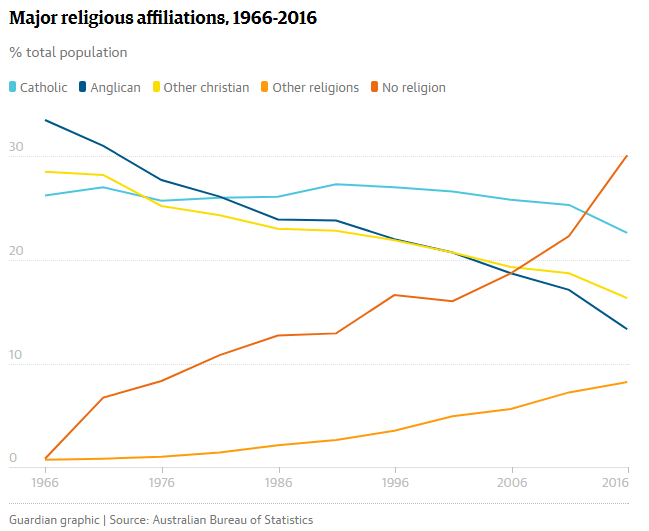 The Christian Daily wrote this about Oriel’s article.

Oriel lamented the ongoing intolerance towards Christians and noted that governments in the West are blocking funding for Christian groups and launching propaganda against them in the name of diversity and inclusion. She also brought up the irony that the Christian faith was on a decline, but the West’s core values were essentially based on Christianity, such as staying faithful to a partner and not committing crimes.

While most people consider crimes and other bad behavior as unacceptable, they fail to see that their nation’s core values are aligned with Christianity. In light of this idea, Oriel warned that losing the Christian faith will also extinguish the light of liberal democracy, and the fall of the religion in the West also heralded the death of the greatest civilization in the world.

Assuming this is an accurate portrayal of Oriel’s piece, it’s clearly a load of rubbish. I’ll address these points one at a time.

Further, Oriel’s problem with people checking “no religion” in Australia’s census wasn’t just her problem with atheism, but her issue with Islam. Like many in the West, she thinks Islam is an existential threat to their society. This is really unlikely in my opinion. Like in most Western countries, there just aren’t as many Muslims as people think. And, they chose to live in the West for good reason. In Australia’s case, they make up less than 3% of the population, and it’s thought at least half are non-practicing.

This is a frequent lament of conservative Christians. It’s a cry we often hear from groups as society becomes more equal. It’s something men said a lot at the beginning of the feminist movement, though it’s mostly men’s rights groups that cry it now.

It comes from those who oppose marriage equality. They would have us believe that somehow same-sex couples marrying has a detrimental effect on their own marriages. I’ve yet to hear one explain exactly how!

And it’s the same here. There is not an intolerance of Christians. Christians are losing their position of dominance – their ability to make the decision without consulting anyone else. Because they can no longer force their opinion on everyone else, they are crying intolerance.

It’s not intolerance or oppression when another group gains rights you’ve always had. It’s time to accept that other people have a right to their opinions, and to be heard.

Staying Faithful to Your Partner

This presumably is a reference to the seventh Commandment: Thou shalt not commit adultery.

If I had to name the West’s core values, I’m not sure “staying faithful to your partner” would cross my mind. Besides, if we’re relying on fidelity to keep our civilization going, I think we’re in trouble. Studies show that around half of men and a quarter of women commit adultery. If Oriel is referring to divorce instead, the results aren’t any more promising. Divorce rates are much higher in Christian or formerly Christian countries than the Muslim ones that worry her so much.

The divorce rate in Australia is currently 43%.

Besides, Islam is just as anti-adultery as Christianity, if not more so. In Islam, the punishment for adultery is still death by stoning. In Christianity, the New Testament means that it’s now possible to be forgiven for adultery and thus still get to heaven.

Personally, I see the current high rates of divorce in Western countries as a result of the growing empowerment of women. As it’s become possible for women to not need to rely on men financially, they’re no longer trapped in unhappy marriages. I believe divorce rates will drop in the future as religious sexual mores lose their grip on society. More people can and will have responsible sexual relationships without feeling they have to marry. Couples will delay marriage until they are sure the person they are marrying is one they want to commit to for life. This is not, in my opinion, a decision 20-year-olds should be making. Of course, some people that age will get it right, but most won’t.

I can’t find figures for Australia, but in the US atheists actually have a lower divorce rate than Christians. In fact, atheists in the have the lowest divorce rates while conservative Christians have the highest rates. (See here.)

I suspect the situation in Australia is similar because the reason for marriage in conservative Christianity is the same. Marriage is a requirement for sex, so people often marry when they’re too young for such a commitment. 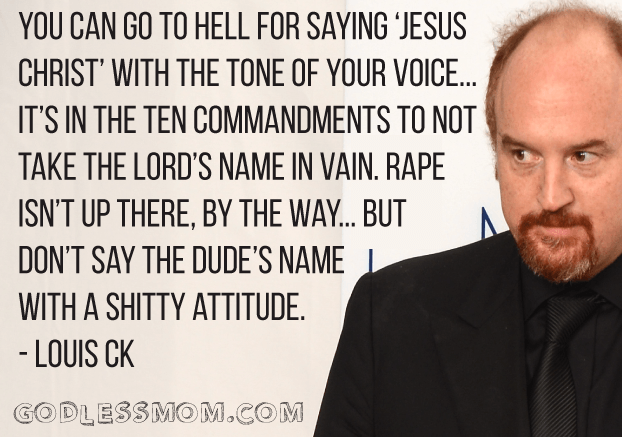 Is this “not committing crimes” thing really a Christian value? Only three of the Ten Commandments are crimes, and those same strictures appear in every other society. Besides, did everyone really think theft, murder, and fraud were okay before Moses came down from Mount Sinai?

Countries with Shari’a treat theft much more harshly than Australia does. In Saudi Arabia you can lose a hand for stealing. Also, Saudi Arabia still has the death penalty, and not just for murder. In several Muslim-majority countries stoning to death for adultery and homosexuality still occur. Australia saw sense years ago and no longer has the death penalty. In 2010 the federal government passed a law forbidding any state from reintroducing capital punishment. Good on them. 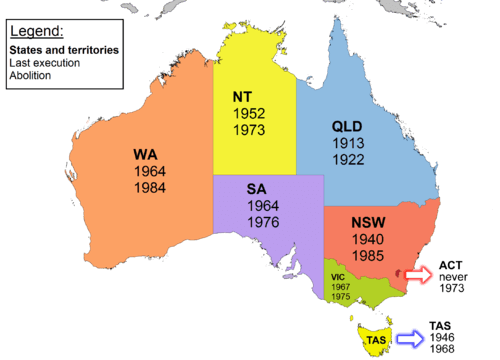 “Losing the Christian Faith Will … Extinguish the Light of Liberal Democracy”

No. Just no. Like many Western Christians, it seems Oriel wants to take credit for both democracy and the Enlightenment. The original idea of democracy, of course, came from the Greeks. From the History Channel website:

In the year 507 B.C., the Athenian leader Cleisthenes introduced a system of political reforms that he called demokratia, or “rule by the people.” This system was comprised of three separate institutions: the ekklesia, a sovereign governing body that wrote laws and dictated foreign policy; the boule, a council of representatives from the ten Athenian tribes; and the dikasteria, the popular courts in which citizens argued cases before a group of lottery-selected jurors.

In 500 BCE, the Greeks were busy worshiping Zeus and his family. Jesus had nothing to do with it – the BC should be a hint there.

As for the Enlightenment, while many of the leading thinkers were Christians, at least nominally, I’m not sure how much credit Christianity can take for it. Their religion was more a sign of the times than anything else. As a result of their ideas, the general trend amongst them was a move towards atheism, or at least deism. Wikipedia describes the Age of Enlightenment thus:

The Enlightenment included a range of ideas centered on reason as the primary source of authority and legitimacy, and came to advance ideals like liberty, progress, tolerance, fraternity, constitutional government, and separation of church and state.

The phrase: “…reason as the primary source of authority and legitimacy …” is not a characterization of any religion. It does describe atheism.

Extending from the above, the most peaceful countries around the world are also those with the highest levels of atheism. The more conservatively religious a country is, the less peaceful it is. 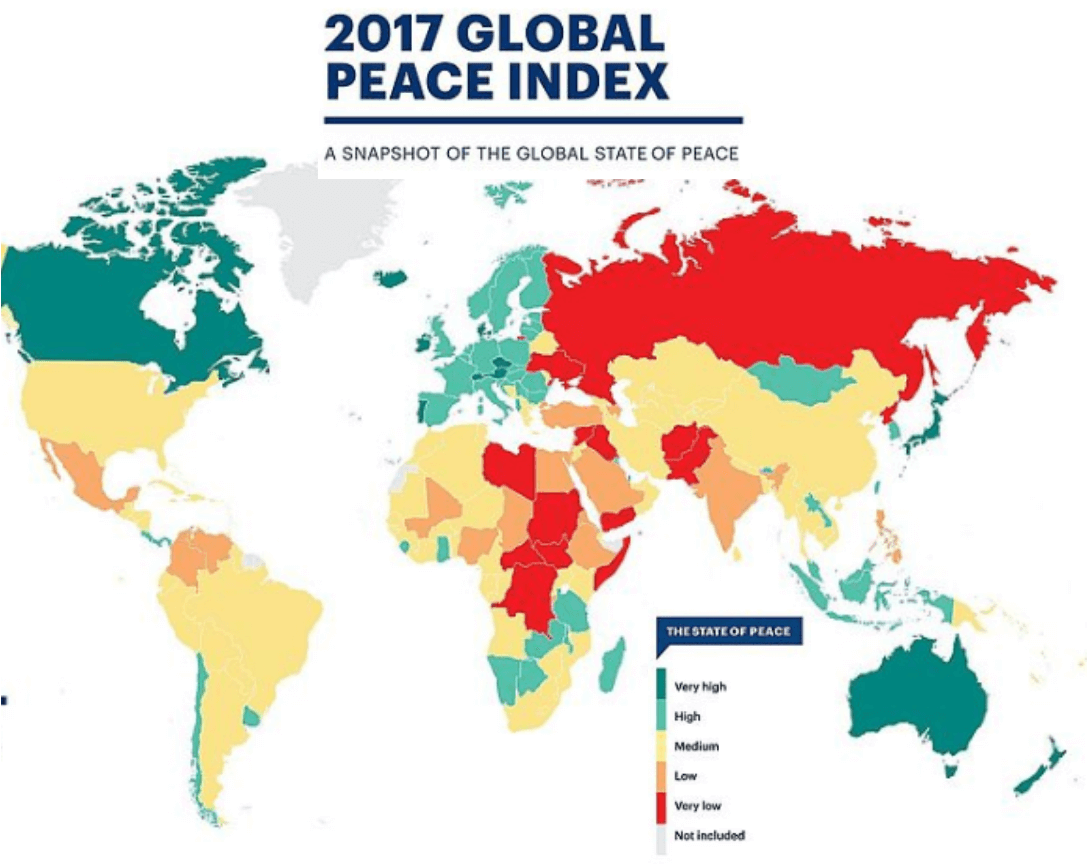 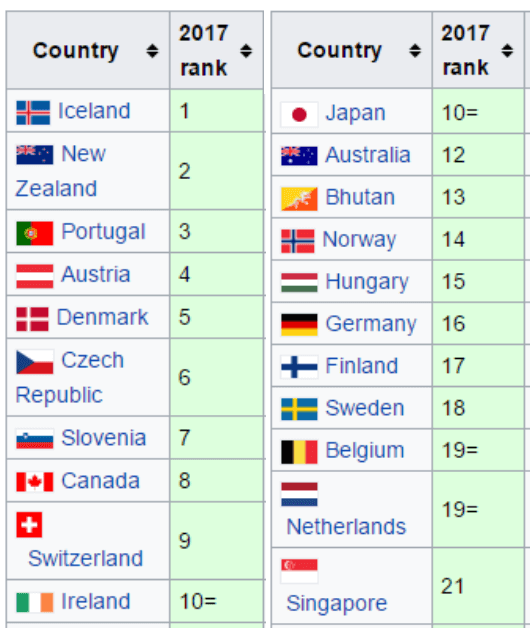 Iceland is consistently number one in the Global Peace Index but less than 10% of the population go to church once a month of more. (See here.) New Zealand is currently number two, and is consistently in the top five. At our last census (2013) 41.9% of the population put their mark in the “no religion” box. Most of the other countries in the top echelons of the index are also amongst the least religious in the world.

The USA is 114th/163. Most of the bottom countries are conservative Muslim-majority countries. The exceptions are North Korea (DPRK), which ranks 150th and Russia, which is 151st.

Christians like to call North Korea an atheist country as that suits their narrative best. Actually they worship their dear leader, Kim Jong-un, and his father and grandfather. Just because the gods are or were alive recently does not make their followers atheists!

Christian countries come higher on the list because of the influence of the Enlightenment, not the other way ’round. You can, in fact, thank atheists for your liberal democracy.

Another global indicator that demonstrates that Christianity is not necessarily an indicator of positive behaviour is the Corruption Index. This is an annual index by Transparency International. Those countries that do best are not the most Christian countries, but the most atheist countries.

(Map is interactive. Click and drag to find your country. Hover over it to find its score and place on the index.)

The two countries that are currently first equal on the list, Denmark and New Zealand, are also two of the most atheist nations in the world. Most of the other nations near the top are also trending towards atheism, such as Norway, Sweden, and Great Britain. Last year, New Zealand went down to number four in the index. It made the national news here because people wanted to know why. Who did something to destroy our reputation?

And there was a reason we were down. New Zealand got a mention in the Panama Papers because a loophole in our banking regulations around Trusts meant it was possible to deposit illegal money here. There was a change in the law, and that loophole is gone. So are the dodgy trusts, and we’re back at number one.

(Table is interactive. Scroll using bar to right of table.)

As I hope I’ve shown, religion does not make a country more prone to civilization. Western countries with a history of Christianity are more likely to be democratic, but that’s the influence of the Enlightenment, not Christianity. Western countries where the values of the Enlightenment have not become part of the culture, like Russia, are in as bad a state as several in the Middle East.

Oriel does not need to worry that ticking the “no religion” box is a bad thing for her country. In fact, it’s a positive thing.