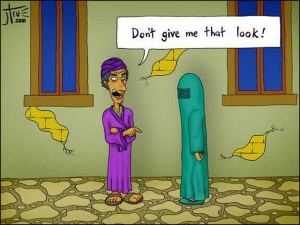 Over and over again conservative representatives of Islam try to tell us that not only are women respected within their religion, they are more respected than women in secular countries. Any criticism of the treatment of women is dismissed as lack of understanding, or misunderstanding.

Up to a point I can understand these attitudes displayed towards women from men brought up in a conservative Muslim society. The examples of their lives from their earliest childhood have been to treat women as being of less value than men. The role of women in their lives has been fixed in their minds and they have also been taught that their god designed them for that role.

There are several passages from the Qur’an and hadiths that support women being placed in a secondary role. Some examples (from WikiIslam):

Sahih Bukhari 7:62:125 – Narrated ‘Abdullah bin Abbas: The Prophet then said, “I saw Paradise (or Paradise was shown to me), and I stretched my hand to pluck a bunch (of grapes), and had I plucked it, you would have eaten of it as long as this world exists. Then I saw the (Hell) Fire, and I have never before, seen such a horrible sight as that, and I saw that the majority of its dwellers were women.” The people asked, “O Allah’s Apostle! What is the reason for that?” He replied, “Because of their ungratefulness.” It was said. “Do they disbelieve in Allah (are they ungrateful to Allah)?” He replied, “They are not thankful to their husbands and are ungrateful for the favors done to them. Even if you do good to one of them all your life, when she seems some harshness from you, she will say, “I have never seen any good from you.’ ”

Surah 4:34 – Men are the maintainers of women for that Allah has preferred in bounty one of them over another, and for that they have spent of their wealth. Righteous women are obedient, guarding in secret that which Allah has guarded. Those from whom you fear rebelliousness, admonish them and desert them in the bed and beat them (without harshness). Then, if they obey you, do not look for any way against them. Allah is High, Great.

What I can’t forgive is men and women who have been brought up in modern secular democracies being supportive of those attitudes within modern society. Situations such as the feminist and LGBT groups at London’s Goldsmith University supporting the Muslim brothers group there against Maryam Namazie is frankly appalling. The president of the university’s Islamic Society even co-opted the language of the authoritarian left when demanding that Namazie be denied a platform at the university – he wrote: “We feel having her present, will be a violation to our safe space …”. Since when has an Islamic society worried about the “safe space” of feminists, LGBT people, and apostates (Namazie is a former Muslim)?

The situation at British universities seems to be deteriorating further with the news last week of the election of Malia Bouattia as the new president of Britain’s National Union of Students. Ms Bouattia has extreme anti-Zionist views and last year led the campaign that prevented the National Union of Students from condemning ISIS – she said such condemnation would be Islamophobic. Several universities, including Oxford, Cambridge, Manchester, Birmingham, York, Exeter and Aberystwyth, and Kings College London, have since announced that they feel the union no longer represents them and signalled their intention to withdraw.

The video below was posted on the internet in Saudi Arabia on 24 February 2016, and last week MEMRI published it with English subtitles. It features family therapist Khaled Al-Saqaby addressing the issue of how to beat your wife:

Here’s my transcript, copied from the MEMRI translation:

Assalaam Alaykum. Allah’s blessing upon you.

Welcome to our show, which will deal with wife beating. I am aware that this issue is a thorny one, which contains many hazards, but Allah willing, we will cross this bridge safely.

I believe that the problem arises when husbands do not understand how to deal with disobedience. Some women disobey their husbands and make mistakes with them, and their husbands think this is due to inadequate treatment (of disobedience).

Allah said: “As for those on whose part you fear disobedience – advise them.”

This is the first step in disciplining one’s wife. First, remind her of your rights and of her duties, according to Allah.

Then comes the second stage – forsaking her (in bed). Here too, some husbands make mistakes, which might exacerbate the problem even further. If, for example, the husband leaves his bed and goes to another house, everybody knows that there is a problem. The point of forsaking her in bed is to discipline the wife, and not to air your dirty laundry in public. Allah said: “Forsake them in bed” – which means that you should stay in bed with her, but turn your back to her, or else sleep in a separate bed in the same room.

By the way, as a woman once told me, this is the most ingenious way to discipline a wife. If the husband leaves the room, it is easier for her than if he remains with her but turns his back to her, or if he sleeps on the floor while she sleeps in the bed, or vice versa.

Then comes the third stage – the issue of beating. We have to understand that the aim is to discipline, not to vent one’s anger. The necessary Islamic conditions for beating must be met. The beating should not be performed with a rod such as this one. [Holds up a thick, knobbly tree branch.] Nor should it be with a headband [which would act like a whip], which some husbands use (to beat their wives), or with a sharp object, which, I’m sad to say, some husbands use. It should be done with something like the sewak tooth-cleaning twig [pulls sewak from pocket and holds it up] – Ibn Abbas said that she should be beaten with a sewak, like this one, or with a handkerchief, because the goal is merely to make the wife feel that she was wrong in the way she treated her husband.

There are things that the husband does and there are things that the wife does which may lead the husband to beat his wife. The opposite might also happen: the wife might hit her husband. The first reason for this is the faulty upbringing of some husbands, unfortunately. They live in an environment where they might see the father beating his wife, and they imitate this behaviour.

Undoubtedly, some of the causes pertain to the wife. Let me mention two of the many causes. The first is arguments between the wife and her husband. A life of equality – you do something, and I’ll do the same. This is a very grave problem. In addition, sometimes a woman makes mistakes that might lead her husband to beat her. I’m sad to day that there are some women who say: “Go ahead. If you are a real man, beat me.” She provokes him.

I don’t even know where to start with this there are so many statements that are problematic. The whole attitude from beginning to end is the one that Al-Saqaby openly states at the end: “A[n expectation of a] life of equality … This is a very grave problem.”

Within Islam it is simply accepted that a women must always obey her husband. There are consequences written into the Qur’an for women who do not do this and as they believe these are divinely commanded by Allah, they are not questioned. Indeed, Al-Saqaby’s contention that the third stage of punishment, the beating, should be with a sewak is an extremely moderate position for Saudi Arabia. There are well known cases in that country where women who were raped were sentenced to a punishment of up to 200 lashes because at the time they were out without their husband.

Every time a well-meaning group sticks up for an Islamist cause, they are by extension supporting the laws of countries like Saudi Arabia. These include:

Everyday life in Saudi Arabia is governed by the ultra-conservative interpretation of the Qur’an by its leaders. Women can’t drive of course. It’s not actually illegal, it’s just that clerics refuse to give permission to issue them to women arguing that it would “undermine social values.” Coffee shops have walls separating male and female customers. Recently such a wall in a Starbucks in Riyadh was removed during renovations and a sign appeared in the window:

Please no entry for ladies only send your driver to order thank you.

According to The Week:

A customer who tweeted a picture of the sign, which was written in English and Arabic, said the store “refused to serve me just because I’m a woman and asked me to send a man instead”.

In a statement, the shop said: “We are working as quickly as possible as we refurbish our Jarir store, so that we may again welcome all customers in accordance with local customs.”

Other things women aren’t allowed to do include:

* Open a bank account without her husband’s permission;
* Leave the house without a male guardian, known as a mahram;
* Wear clothes that “show off their beauty” (as per the king’s advisory Shoura Council);
* Go swimming. Even at upmarket hotels women cannot go near the pool because men wearing swimsuits are there;
* Play sport except wearing Sharia-compliant sportswear that covers the whole body and the hair;
* Try on clothes in a store;
* Enter a cemetery;
* Read a fashion magazine that hasn’t been approved by censors;
* Buy a Barbie doll.

We all know what would happen if any man in a Western democracy produced a video explaining how to beat your wife. Yet when such things come from Islam too many are prepared to accept them. Because a majority of the world’s Muslims are people of colour it’s somehow become unacceptable to criticize anything about their religion as if it’s a form of racism. It’s not.

Family violence, whoever commits it, is wrong. There is no way to make it acceptable, including religion. A large proportion of the leaders of Islam teach that women should not be treated equally to men. That is not okay and those who continue to give Islam a pass in such situations need to examine their views carefully. By not opposing Muslims who do not treat women as equals they are supporting that same treatment.