It must be true, because the internet said so.

I’m not quite up to thinking too hard yet, but I thought I’d make the effort to do my weekly Auē a Tau Kē Tēnei Wiki posts anyway. In an experiment to see whether God would intervene in the heresy of an atheist taking the test, I decided to have a go at this one:

Obviously, I disagree with the first statement, but having never seen evidence saints don’t exist, I have to be open to the possibility they do.

The first question proved to be problematic though: 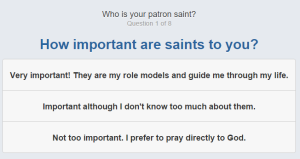 Saints aren’t important to me. However, I never pray either. I decided to go with the third option though – I was a Presbyterian before I was an atheist, so there’s a history there of not approving of praying to saints. I also reasoned that this test was about the saint, not God, so number three was the closest to my opinion.

Question two was much easier: 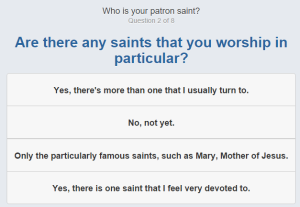 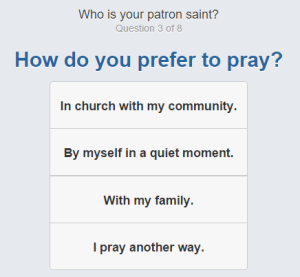 I don’t pray. I do the sort of meditation that’s supposed to help with pain relief sometimes, and there are certainly times I am in awe, or consumed by wonder, at various aspects of our natural world. Just a couple of days ago I spent a lot of time being amazed as I watched the third set of the match between Roger Federer and Novak Djokovic at the Australian Open. The tennis from both men was just incredible. Anyway, I went with “I pray another way.”

Question four presented a hypothetical situation for me: 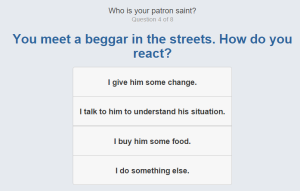 This is a situation I’ve never come across as an adult, which I didn’t realize until I took this test. There was one beggar for a few years (about five) in the city I grew up in, and everybody knew who he was, and how to handle him. Sometimes I gave him money, sometimes I didn’t. It rarely got cold in my home town, but when it did, the Police gave him a bed for the night. Otherwise he insisted he preferred to live in the streets. So I chose the “I give him some change” option.

Question five was easier, although the reasoning behind my answer was probably not what the makers of the survey had in mind: 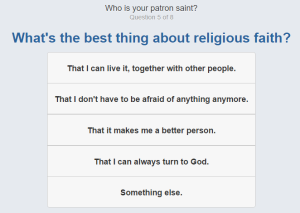 I, of course, chose “Something else.” Option one, a sense of community, sounds good on the surface, but it is also about creating an in-group and an out-group, thereby unnecessarily dividing people. If someone chooses option two they think religious faith means they don’t have to be afraid of anything. That’s worrying. If they were afraid before, they’ve been given a false prop which, because it’s false, could be knocked from under them at any time. It may also mean they’re been preyed upon by one of the more extreme religions.

Option three in particular (“That it makes me a better person”) is one that atheists find both offensive and scary. If the only reason you are good is because you’re either scared of divine retribution of looking for divine reward either here or in the afterlife, you’re not really a good person at all. It also comes with the sub-text that you have to be religious to be moral and worse, that those who aren’t religious are also immoral.

Option four – always being able to turn to God – is a bit of a concern too. While I can understand it, it’s also not reliable as an emotional prop because it’s not real. It’s better, I think, to teach someone how to draw on their inner resources to cope in times of trouble. 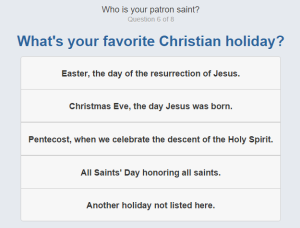 I like Christmas Day best, because throughout my life it’s almost always been a happy day, so I went with “Another holiday not listed here.” 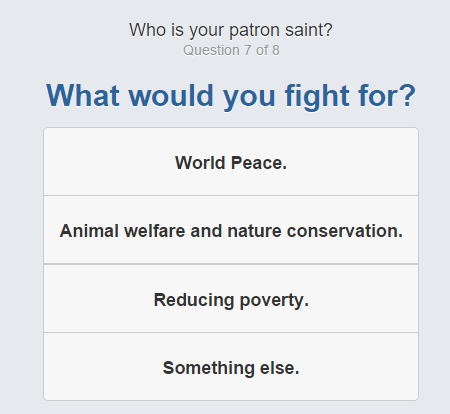 I think all those things are important, and more. One of the things that is important to me is the advancement of rationality over superstition, so that people don’t rely on things like patron saints. Women’s rights is really important to me too, as is education for all. I can’t choose just one thing, so plumped for “Something else.””

The last question was the easiest of the lot: 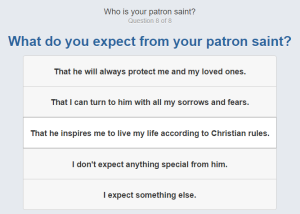 Obviously, I don’t expect anything from him. Since I don’t think there’s anybody, sanctified or otherwise, looking down on us, I can’t imagine I’d get any help from such a being even if he existed.

A few seconds later, my result was calculated:

The blurb, in case you don’t carry a magnifying glass:

Francis from Assisi was a happy person who didn’t worry too much. He took care of people with such great patience and enchanted people with his kind nature. Francis proved how important social commitment is for a peaceful community. You, as well, so remarkable things for others, supported by your patron saint Francis of Assisi. You’ll be rewarded for it! Which patron saint watches over your friends? Share this test now so that they can find out!

So here you go. It’s your turn now. Click here to find out who your patron saint is. If you take the test, let us all know how you got on in the comments below.

I suspect most atheists will answer similarly to me. Does that mean Francis of Assisi if the patron saint of atheists?