As most of you will already know, Raif Badawi is a Saudi Arabian blogger who was sentenced to ten years prison and 1,000 lashes for criticizing his country’s form of government. As the country’s law is Sharia, that amounts to criticizing Islam and is thus blasphemy. Badawi was supposed to receive his 1,000 lashes in batches of fifty per week, to be administered in the square outside a Jeddah mosque following Friday prayers. The first fifty occurred in January, but the remainder have so far been suspended, officially because Badawi is too unwell. Badawi’s wife says if her husband were to be subjected to anymore physical punishment, it would kill him. It may also be political pressure that is stopping the lashes, but Saudi Arabia is not admitting to this.

Recently there was reason to be hopeful that Raif Badawi might be released from prison. At the end of November, the Friendly Atheist reported:

Raif Badawi with his children before his imprisonment (Source: Center for Inquiry)

Yves Rossier, the Swiss secretary of Foreign Affairs, has told the newspaper La Liberté that Badawi’s sentence has been officially suspended.

The CBC explains:
Rossier said he brought up the matter while on an official visit in Riyadh, Saudi Arabia.

“A royal pardon is in the works thanks to the head of state, King Salman bin Abdulaziz Al Saud,” he added.

If that’s true, it’d be incredible. Badawi’s wife and three kids, who currently live in Quebec, have been pleading for his release, as have human rights activists across the globe.

But it’s a big if. There’s no further confirmation of this information and Badawi has not yet been released. Saying that a pardon is “in the works” could mean any number of things. Until Badawi is safely home with his family, I’m not getting my hopes up.

Reader Ken brought another update to my attention a couple of days ago. Again according to reporting by the Friendly Atheist, Badawi’s wife Ensaf Haidar posted on Facebook on 11 December: 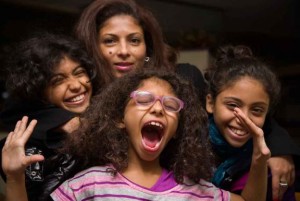 The prison administration transferred today my husband Raif Badawi to a new isolated prison called Prison Shabbat Central, located in a deserted and isolated area — around 87 KM from Jeddah City.

This prison is designed for prisoners, whose verdict has been confirmed with a final Adjudication. The Saudi government has repeatedly declared that Raif’s case is under review and is yet to be decided by the Supreme Court.

We express our surprise at this decision especially after the Swiss Secretary of Foreign Affairs Yves Rossier announcement on 28 November that a royal pardon is in the works. And we are very alarmed at the prison administration decision to transfer my husband to the Shabbat Central and fear it may lead to the resumption of his flogging.

As a result of this decision, Raif started in Tuesday a hunger trike and we hold the prison administration responsible for any harm that Raif may suffer.

We take this opportunity to call on his Majesty King Salman to act on his promises and pardon my husband, end his and his family’s ordeal and unite him with his wife and children.

New Zealander Ken Dunae of the Blogidarity blog (not the same person as reader Ken mentioned above) has started a petition to ask the New Zealand government to apply diplomatic pressure on Saudi Arabia to free Raif Badawi. I’ve signed it. On our own we have little of no influence in this, but more and more countries are speaking out about the appalling human rights record in Saudi Arabia, and collectively it’s possible it’ll make a difference. It’s a step up from ignoring the issue anyway.