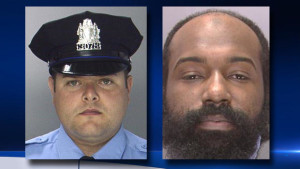 At about 11.40 pm Thursday (US time) 30-year-old Edward Archer, allegedly ran at police officer Jesse Hartnett while he was sitting in his patrol car, firing a gun. Archer reportedly discharged eleven shots, the last at point blank range actually inside the car. He then ran away from the car, shooting back towards it. Amazingly, Archer only managed to hit Hartnett three times (all in the left arm), and Hartnett was able to call for help, exit the car, and follow and fire at Archer, wounding him. Archer was arrested by the police officers who came to Hartnett’s assistance.

Archer, 30, of Yeadon [a small town just west of Philadelphia] is facing multiple charges including attempted murder, aggravated assault and terrorist threats in the shooting of Officer Jesse Hartnett.

According to police, the suspect confessed to the crime, saying he did it “in the name of Islam.”

Commissioner Richard Ross provided the update during a news conference on Friday afternoon. He said there was no indication from Archer that he was involved in a conspiracy.

Archer allegedly told authorities he targeted an officer because police defend laws that are contrary to the Quran.

I already knew this had happened when I switched on Fox News. The coverage I saw there left me angry and frustrated. They continually replayed the video of the shooting, the comments of Police Commissioner Ross saying the perpetrator said he committed the shooting in the name of Islam, and the comments of the Mayor (see second video). As far as those I saw on Fox News were concerned, this was an Islamist terrorist attack. In the time I watched, there was no mention of the fact that the suspect’s mother said Archer had a brain injury from his time playing football, and only passing mention of his previous criminal record.

It seems clear to me that if this same situation had occurred but the suspect had mentioned the Bible instead of the Qur’an, the focus would have immediately been on the mental health of Archer. It may be that Archer has been recently radicalized, but there is so far no evidence of that. However, because of the current climate in the United States whipped up by the candidates in the GOP primary, the immediate assumption is Islamist terrorism.

Further, I was extremely disappointed that when this event was reported on New Zealand’s most watched news programme last night, One News, it was also reported as a terrorist event. They replayed the BBC reporting of the event, which linked it to three other events that were terrorism.

Following the above, the mayor spoke at the press conference. To get a video of what Philadelphia mayor of four days Jim Kenney said, I had to trawl through a series of anti-Islamic websites. The one below is the least offensive. (It repeats some of what is in the clip above.)

This may be a terrorist attack, and if so, it raises other concerns.

Mayor Kenney (D) said, I assume in an attempt to stop any backlash against Muslims following the attack:

In no way shape or form does anyone in this room believe that Islam, or the teaching of Islam has anything to do with what you’ve seen on that screen. That is abhorrent, it’s just terrible and it does not represent the religion in any way shape or form, or any of its teachings. And this is a criminal with a stolen gun who tried to kill one of our officers. It has nothing to do with being a Muslim or following the Islamic faith.

In my opinion, the reaction of Fox News and the multiple anti-Muslim sites is exactly what is to be expected when people make comments such as those of Mayor Kenney. His words were exactly the wrong way to handle the situation, and provided rich fodder for the bigots.

When a perpetrator says, “I did this for Islam,” then a community leader says, “This has nothing to do with Islam,” people simply don’t accept or believe it, and it makes them angry.

What needs to be said is that the perpetrator of the crime is not supported by most in the Muslim community, and that most Muslims do not agree with or endorse his views. And it needs to be a Muslim community leader who stands up and says that, not someone who has no obvious credentials to speak on behalf of Muslims. Muslim leaders do do that of course, but not usually in the immediate aftermath and so there is little coverage, and no-one hears about it. Then we get the constant remarks like, “Where are the Muslim leaders in repudiating the perpetrator’s actions?”

Regular readers will know I’ve been saying this since I started my website. I’ve since discovered that someone whom I respect greatly, Maajid Nawaz of the Quilliam Foundation, is of the same opinion. On The Kelly File not long ago he said:

There’s a danger if we don’t name this thing ‘Islamist extremism’ and isolate it from mainstream Muslims, and then undermine it. When we don’t name something, the vast majority of people who don’t really understand these complex conversations will assume the problem is with the religion of Islam and Muslims, themselves.

He has termed it the Voldemort Effect, and wrote about it recently in The Daily Beast: 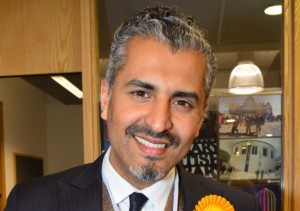 Recognizing the source of that support means avoiding the apologism of the far left or the sensationalism of the far right. Both of these reactions will render us blind to the real wellspring of this insurgency’s appeal: the Islamist ideology, as distinct from the religion of Islam.

President Obama, and many liberals, shy away from calling this ideology Islamism. Their fear is that both Muslim communities and those on the political right will simply hear the word “Islam” and begin to blame all Muslims. Instead, the mantra that is repeated is “ISIS has nothing to do with Islam.”

Phrasing things in this way rests on an understandable concern. But it exacerbates the very problem it seeks to avert. To explain this, for a while now I have been using a reference from popular culture, which I am glad to say has now made the Urban Dictionary. I call it the Voldemort Effect, named after the villain in J.K. Rowling’s Harry Potter series.

The people in Rowling’s fictional world are so terrified, so petrified of this evil that they do two things: They refuse to call him by name, instead referring to him as “He Who Must Not Be Named,” and while refusing to name him, they also deny that he even exists at all. Of course, that only increases the fear and worsens the panic and public hysteria, thus perpetuating Voldemort’s all-powerful myth even more. Refusing to name a problem, and failing to recognize it, is never a good way to solve it. We know that from the Weimar years of appeasement to Nazism, as much as recovering alcoholics will understand it from their 12-step programs.

I say this as a liberal, and as a Muslim. In fact, I speak as a former Liberal Democrat candidate in the U.K.’s last general election and as someone who became a political prisoner in Egypt due to my former belief in Islamism. I speak, therefore, from a place of concern and familiarity, not enmity and hostility to Islam and Muslims. In a televised discussion with CNN’s Fareed Zakaria on the issue, I have argued that of course ISIS is not Islam. Nor am I. Nor is anyone, really. Because Islam is what Muslims make it. But it is as disingenuous to argue that ISIS has “nothing to do with Islam” as it is to argue that “they are Islam.” ISIS has something to do with Islam. Not nothing, not everything, but something. If you’re going to talk to a jihadist—and believe me, I have spoken to many—you’re not going to find yourself discussing Hitler’s Mein Kampf. You’ll be discussing Islamic texts.

The result of refusing to name the problem is exactly what has occurred here. All the Fox News shows I watched on Saturday (Friday US time) took exactly this approach – they constantly contrasted the mayor’s words of “this has nothing to do with Islam” and those of the police when telling us what the suspect said. After trying to find video or a transcript of the mayor’s words, I felt dirty. They were all over every anti-Islam site you care to name, ramping up anti-Muslim sentiment, which is exactly the opposite of what the mayor is after. To be fair, some of the Fox News hosts recognize the problem of not naming Islamist terrorism too, but to me they don’t make the distinction clear enough and so play into the hands of the anti-Muslim crowd.

As long as the issue of Islamist terrorism remains in the minds of most people as a battle against all Muslims, the Clash of Civilisations mentality will remain. Thus, when Donald Trump calls for a ban on all Muslims, and Republican governors call for a ban on Muslim refugees, all Muslims will be seen as potential terrorists and hate will spread. And when you hate someone, it’s OK to carpet bomb cities of hundreds of thousands (like Mosul in Iraq) to get rid of a few thousand terrorists.