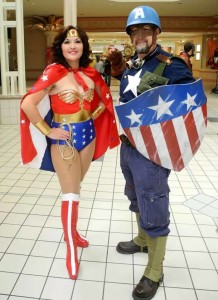 Samantha and Steve as Wonder Woman and Captain America

When it finally dawned on me I was an atheist, the only other atheists I knew were my GP and Pain Specialist. However, it was a political situation, specifically women’s issues, that finally inspired me to join Twitter. On joining though, I quickly found a wonderful atheist community, which soon dominated my communications. Interacting with other atheists gave me the confidence to be more outspoken about my own views. Two of those who have been supportive of me from the start are @CaptnAtheist (real name Steve) and @WondieBee (real name Samantha), a couple from Florida. Steve and Samantha are cosplayers and their alter-egos are Captain America and Wonder Woman.

Along with @DJDuckus (Wolverine) in the UK, they founded the atheist secular humanist group Atheist Super Heroes (#A_S_H) that actively promoted and defended atheism, secularism and humanism on-line. I was honoured to be invited to be a member of A_S_H soon after joining Twitter. Later, membership was opened to anyone who supported its values. To me it was a bit of fun and a way of deliberately aligning myself with other atheists who promoted secular humanist values. Some atheists had negative perceptions of us, and some religious groups were also upset by us. Steve in particular was bullied and abused constantly; some of the worst came from fellow atheists, which I found incredibly disappointing. Around September 2013, although continuing with their promotion of atheism and secular humanist values on-line, Steve and Samantha stopped their coordination of the group. I continue to use the A_S_H Twibbon on my Twitter avatar in support of the values of the group and as a silent protest against the way Samantha and Steve were treated.

Samantha and Steve are special people, and they didn’t let that bad experience stop them. Their on-line activism had given them confidence and they were soon looking for another way to do good in the world.

“In December 2013,” says Samantha, “we [as Wonder Woman and Captain America] were invited to a charity event by another cosplayer. We both had an absolutely wonderful time. Seeing the smiles on the kids’ faces, the joy on the parents’ faces when seeing their children so excited and happy to see their heroes come to life – it impacted both of us in such a positive way. We knew we had to keep the momentum going. 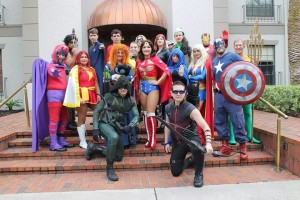 “We looked into other charity superhero groups and discovered there was a lot of “politics” involved. With the bad taste still in our mouths from ASH, we declined joining another group and decided to start our own with just the two of us. This would keep it simple and there’d be no drama.”

They kicked around a few ideas for names, focusing on what they really wanted to do – bring smiles to kids. They decided on Superhero Smiles Initiative. As Samantha says, “that’s what we wanted to do – bring smiles.” They developed a catchphrase too: “When Superheroes are around, Smiles abound!” They created a Facebook page to put the word out, and it wasn’t long before they were attending events. Sometimes it’s just the two of them, sometimes they invite other cosplayers who share their vision along, and sometimes they join up with other charity cosplay groups. 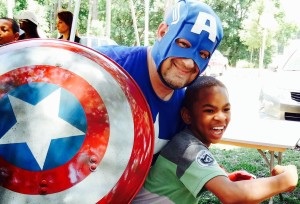 Steve as Captain America with his new friend at the Community Centre gig.

Samantha told me a wonderful story of an interaction Steve had with a special needs boy at a Community Health Centre:

“He walked up to Steve and said, “Captain, there is a bad guy in the parking lot, come help me!” So Steve went out with him, and they hung out on and off throughout the event.’ Captain America’ encouraged the boy to report any bad guys to his mom, to stay safe.”

Samantha has equally rewarding stories to tell of her own connections with the kids. One, at their latest gig, a Christmas party for kids with cancer, was a young girl named Allison:

“She latched on to me, all wide eyes and smiles, and hardly left my side the entire night. The kids revel in the attention they get from Captain America and Wonder Woman.”

Samantha and Steve don’t ask the kids what they’re going through – they want them to forget about that for a time.

“Our never-ending encouragement comes from the kids,” says Samantha. “Those smiles, the laughter, the hugs, and the sheer happiness we see are so rewarding. We do it for the kids, but we get enormous joy from it ourselves.”

Samantha and Steve have been offered paying gigs, but, “that would then make it a job,” laughs Samantha.

So thank you Samantha and Steve. You’re the type of people this world needs more of.