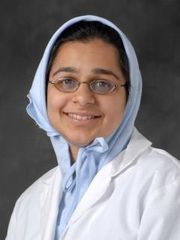 A couple of months ago I wrote a post: Making Excuses for Islam and FGM. Although the post was a general one about the issue of FGM worldwide, the inspiration came from the arrest of three doctors in Detroit. One of them, Dr Jumana Nagarwala, was initially facing charges of performing FGM on two girls. The other two were Dr Fakhruddin Attar and his wife Farida Attar. They were allegedly allowing the FGM to take place on the premises of their practice. There was a suggestion from reports that Dr Nagarwala may have been carrying out the procedure there for many years.

At the time I wrote the post, Dr Nagarwala was denying she cut the girls at all, though they tell a different story. Investigators were also reporting that there was evidence of cutting on the girls’ genitalia.

There are currently three charges against Nagarwala: 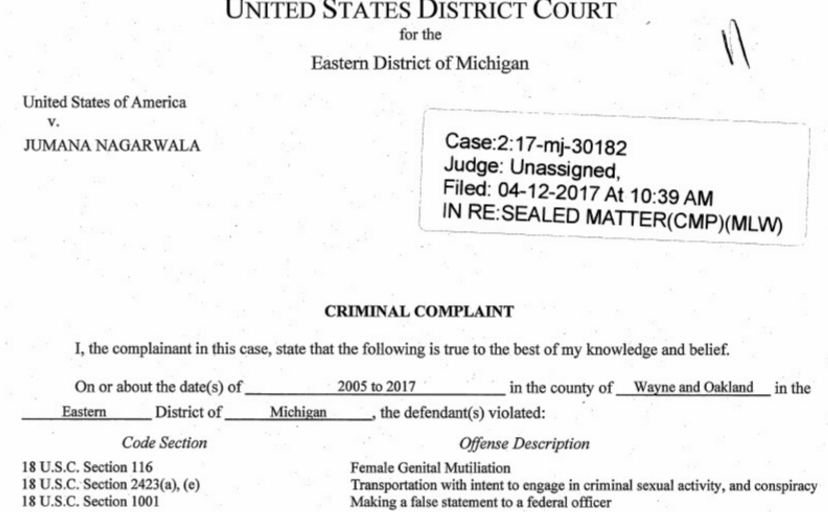 The arrest of Dr Nagarwala came as she was about to board a flight for Africa. The obvious assumption is that she was trying to avoid arrest. Investigators have said both she and the Attars are a flight risk, and they are all still in custody. It appears bond will not be available to them.

The Children of Nagarwala and the Attars

Dr Nagarwala has two children – a boy and a girl. The investigators allege the girl has undergone FGM. FGM is child abuse and therefore she and her husband may lose custody of both children. The Detroit Patch reports:

The petition was one of three filed by CPS in Wayne County, and comes on the heels of three others filed in Oakland County, including one against Nagarwala’s co-defendants in a federal case, Dr. Fakhruddin Attar, 53, and his wife, Farida Attar, 50, of Farmington Hills.

The Attars have a daughter who is still in their home under the care of relatives.

Via their lawyers, Nagarwala and the Attars are all saying that they are undergoing persecution because they are Muslim. They continue to deny that any cutting took place. The most Nagarwal will admit to is “wiping away excess skin”, then giving it to the parents for ritual burial.

There is an ongoing federal investigation in relation to this case; performing FGM is a felony charge. The report from the Detroit Patch also reports:

Six more girls from Metro Detroit have been identified as having undergone the procedure since the federal investigation began.

They go on to say that the parents of those girls are also at risk of losing custody of their daughters. However, none of those parents are currently facing any charges.

On 19 May Imam Shaker Elsayed gave a sermon at the Dar Al-Hijrah Islamic Center. The following, via MEMRI, was part of that sermon.

Elsayed tells his congregation that that FGM is:

… the honourable thing to do, if needed, for the girls. This is something that a Muslim gynaecologist can tell you if you need to or not.

Why a Muslim gynaecologist? That the religion of the medical professional makes a difference to the diagnosis should trigger someone to question the statement right there.

And I find the words “if needed” quite disturbing. The girls found so far had the procedure at the age of seven. Most around the world have it even younger. Who is judging these children, toddlers, and babies to decide that their behaviour is such that they need FGM to control their level of sexual desire?

… There used to be a lady who used to do this for women, or, I mean, young girls.

This is where I suspect he is referring to Dr Nagarwala. Dr Nagawala is a Shi’a from the Dawoodi Bohra sect of Gujarat in northern India. Normally a Sunni from Egypt like Imam Elsayed wouldn’t promote someone from that sect. But I guess when it comes to mutilating little girls he can manage to overlook such things.

And the words, “… do this for women, or, I mean, young girls.” Is there some confusion which you’re referring to when it comes to sexual matters Mr Elasyed?

Elsayed Connects FGM to Islam and Describes its Purpose

Elsayed then details how to carry out the procedure. He seems to think these details make everything okay.

She is expected to cut only the tip of the sexual sensitive part in the girl, so that she is not hypersexually active. This is the purpose. Of course, if that lady, or that surgeon, cuts more than the tip, it causes serious harm in the sexual life of the child when she grows up. And this is why the West thinks of [FGM] as sexual mutilation because in many of the Muslim countries, ladies and men who are not qualified, and do not have the training or knowledge as to what exactly needs to be done, they cut more than needed and they end up damaging the sexual sensuality of the woman when she becomes an adult, and she becomes cool or cold in the sexual relationship. This is haram [Arabic – forbidden], this is prohibited. Okay?

I’m not entirely sure whether it’s being sexually cold or not performing FGM the way he mandates that is forbidden!

Hypersexuality: The Bane of Western Society

Elsayed explains why FGM for girls is so important.

On the contrary, you see in societies where circumcision of girls is completely prohibited, hypersexuality takes over the entire society, and a woman is not satisfied with one person, or two, or three. This is, God forbid, now happening, even in Muslim societies where they prohibit circumcision.

They use a mistake in practice to prohibit the tradition, and they end up causing a lot of damage on the other extreme side of the sexual life of a woman.

Blaming this imaginary hypersexuality on the failure to practice FGM is making sexual “sin” the fault of women. How about men taking equal responsibility for living up to the religion’s rules of behaviour, or are Muslim men just too weak?

And if this hypersexuality is now happening, so much for “God forbid”. He’s not stopping it, so either He wants it to happen or He doesn’t exist. I thought we were made in God’s image. So why are we chopping bits off He saw fit to give us?

However, I must say I like how he says “person” and not “man”. Does this mean he’s okay with same-sex relationships? Or is it just that men are the only ones who are people with a right to make decisions about their bodies. Women and girls are possessions under the control of actual people.

According to MEMRI, Elsayed became resident imam of the Dar Al-Hijrah Islamic Center in June 2005. Previously he was Secretary-General of the Muslim American Society from 2000-2005.

MEMRI put out a clip from another of Elsayed’s sermons just two months ago. That one was an anti-Jewish rant. Is this a sign he’s becoming more extreme?

Dar Al-Hijrah Islamic Center was also the mosque where top al-Qaeda lieutenant Anwar Al-Awlaki was imam. Although he is now dead, Al-Awlaki continues to inspire Islamist extremists via his on-line anti-US sermons.

There Are No Valid Excuses For FGM

There is no way to justify arbitrarily carrying out this procedure on children. The words of Elsayed have added nothing to the debate. We need to continue to speak out against this revolting practice.