Were the Allegations Against Trump Answered by the Election? (plus Tweets) 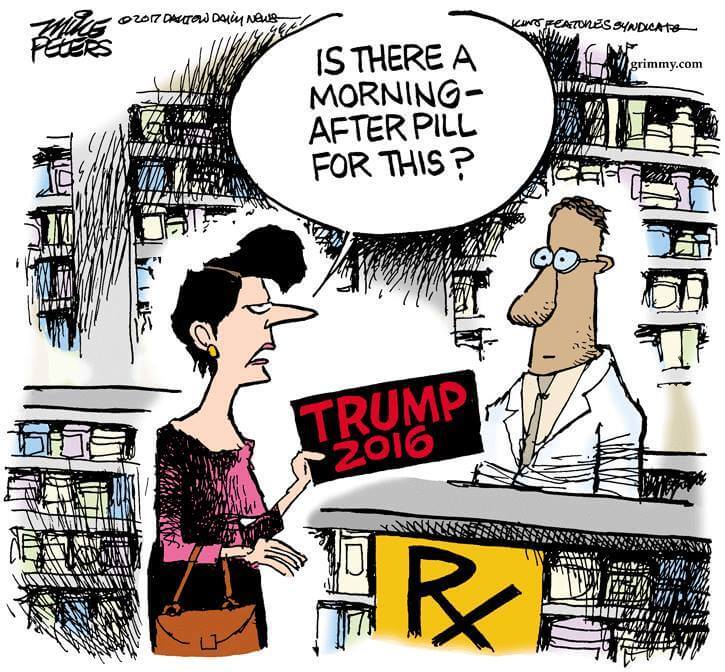 I’m getting sick of the right-wing people who are constantly telling us via tweets, news conferences, editorials, and more, that the question of the sexual assault allegations against Donald Trump was answered by “the people” in the 2016 election.

Somehow, Trump is innocent of all the allegations because he won the Electoral College.

If that’s the case, it’s also time for them to shut up about Bill Clinton’s shenanigans. After all, he won an election too, and he got the popular vote as well as the Electoral College.

Oh, and as Hillary Clinton got a much greater share of the vote than The Donald, she’s in the clear too. I don’t think she’s done anything illegal myself, but surely winning the popular vote means she’s out of the woods on any charges made before the election? That’s the logic at work when Sarah Sanders says “the people” answered that question.

And there’s no need to investigate whether the Trump campaign was in collusion with the Russians either. Trump’s win in the election means no one cares whether he did or not. (Actually, I think they’d agree with that one.)

Give me a break.

It is clear there was a massive attempt by the Russian government to influence US voters to vote for Trump. The only question is whether the Trump campaign was part of the efforts. There are pointers that they were aware of it. There is evidence they were willing to collude. So far, the general public hasn’t seen a smoking gun. We don’t, however, know if the Mueller investigation can say the same.

What’s also interesting is the number, especially on the right, who say there’s no evidence Russia’s interference had any influence on the result of the election. That’s like asking people how much advertising influences them.

We know that the Russian fake news campaign had it’s focus on states like Wisconsin and Michigan. Those states went to Trump largely because reliable Clinton voters didn’t cast a ballot. It’s understandable why they didn’t too. There was an avalanche of negative media about her.

Towards election day, even I had moments of doubt about Hillary Clinton. When James Comey came out and said there were more emails, I began to think I was wrong about her. Of course, a few days later came the announcement that all the emails were copies of ones the investigation saw earlier.

Remember, I was getting almost none of the anti-Hillary social media. When I saw it, it was usually part of a debunking story. For example, I had absolutely no idea about the pizza shop child prostitution story until the man with the gun turned up to rescue the kids. That’s not a story I would have ever thought true, but then I wasn’t the target audience. There was some extreme sophistication in the audience selection for the messages, and there were, and are, plenty of believers. Many still think the Deep State is hiding the truth.

We are still seeing that people will believe almost anything if you package it right. Most Republican voters didn’t believe the pizza-gate story. However, plenty of otherwise intelligent, reasonable Republicans were and are ready to believe the Uranium One story. So are plenty of others.

Ever since his announcement he was running for election, Donald Trump has been in a battle with the “main-stream” media. He calls it the “enemy of the people” and goes out of his way to make people distrust it. Instead, people are told to trust his tweets. I find it very concerning that this message is successful with a pretty large portion of the US population. I saw them during the election. In interviews they said things like, “I thought Donald Trump was a liar. Then I went to one of his rallies and I found out he is the one telling the truth. He wouldn’t saw all those things direct to the people if they were lies.”

So when the truth does come out in mostly reliable the “main-stream” media, and if that truth is that Trump is a sexual predator who colluded with the Russians, a huge chunk of USians has been conditioned not to believe it. And they won’t. If and when that happens, in a country that is already strongly divided along partisan lines, we could see social uproar.

Psychiatrists: President trump ‘is a danger to the public, and the international community.’ pic.twitter.com/bJYIS7jcNt

I wrote today’s homily before I saw this tweet. I can’t believe this is still going on! But what a brilliant job of dismantling the Republican attempt to deceive!
(Via Ann German.)

With Hillary Clinton/Uranium One back in the news, time for a throwback to when @Joy Ann Reid completely dismantled the conspiracy theory in less than 2 minutes pic.twitter.com/EP8iHCjzOn

How the GOP Tax Plan works:
(Via Ann German.)

“The @GOP was the Grand Old Party until they installed a criminal mob Family as #POTUS & looted our National Treasure giving #Billionaires kickbacks in ’17. You only hear about them now when they go to prison.” #FBR #Dem Force pic.twitter.com/NyQUvDnXac

This is truly nauseating. It reminds me of a third-world dictator requiring his subordinates to constantly praise him.

This Mike Pence “prayer” of thanks to Trump is excruciatingly, stomach-churningly uncomfortable to watch. The ritual submission and exaltation is nearly pornographic. This is not America. pic.twitter.com/FN6y2X2K73

Important 1995 essay by Umberto Eco on the features typical of what he calls “Ur-Fascism,” which he warns is “still around us, sometimes in plainclothes.” via @ny books https://t.co/D3feu57WbP … pic.twitter.com/WaLJfSbysZ

The plot thickens.
(Via Ann German.)

NEW: A small group of House intel committee Republicans, led by Rep. @DevinNunes, have been quietly building a case they say will show corruption at the highest levels of DOJ and the FBI.

They hope to issue a report early next year. w/ @BresPolitico https://t.co/pvlfajbM0b

I agree with this response to the above tweets:

“Whether ours shall continue to be a government of laws and not of men is now for Congress and ultimately the American people.”–fired special prosecutor Archibald Cox, October 1973 https://t.co/cZL7xXFUEl

There are more reasonable voices, and we can only hope that they carry the day. (The video is 12 minutes long, but worth listening to if you have the time.)
(Via Ann German.)

Some nice news for a change.
(Via Ann German.)

The MacArthur Foundation (@macfound) will give $100 million to the Sesame Workshop and the International Rescue Committee (@theIRC) to help the children of war-torn Syria. https://t.co/dIcEbYWayZ pic.twitter.com/39WjY9LYIn

.@HRC protests tonight in powerful display projected at Trump’s DC Hotel. The projection rotated words Trump-Pence administration reportedly banned at the CDC, including “transgender” & “diversity” – and ended with a declaration from the #LGBTQ community: “we will not be erased.” pic.twitter.com/Yq8aQQdaRX

More good news. I hope he gets to be a barber like he wants.

This Brooklyn man is free after spending 30 years in prison for a rape he didn’t commit pic.twitter.com/rZ5PuPJAsG

This is definitely the most interesting response we’ve received to a request for comment from the government in a while. pic.twitter.com/gDz6f05iqr

“please, signore, how Italian is your restaurant?” pic.twitter.com/Etq76sYMFo

This FAR SIDE is still one of my favorite strips of any kind ever. pic.twitter.com/S1BDFiLeg4

A lovely short (c. six minutes) film about the Norfolk Broads. (There’s a lot more in here that just “other animals”!)

Otter dentist is tired of your games… pic.twitter.com/qBbnmPwi3G

Beautiful? No. Still as effing scary as ever!!!
(Via Ann German.)

This is a beautiful ???? #albino #alligator????. #ThursdayThoughts #wildlife https://t.co/7LNmfhEv7W pic.twitter.com/MaLTLVAwPZ

Who knew?
(Via Ann German.)

Apparently porgs are in the new #StarWars because it was easier than digitally removing the hundreds of puffins living on Skellig Michael island where it was filmed. Which means they’re basically SPACE PUFFINS!! pic.twitter.com/b8imdQLOSa

The Far Side cartoons are so good!
(Both via Ann German.)

This one was always my dad’s favourite pic.twitter.com/TGYbmmxofp

One last comic. But seriously that complete far side collection is worth evvvery penny pic.twitter.com/ymJkTYSApX

This made me laugh!

He’s scared of himself in the mirror pic. twitter. com/ tCbo7yhq2H

Dear Twitter cat family take one minute and let us spread a little cat love and pawsitivity to you for the holidays! Retweet this if we achieved or goal of making you happy or smile pic.twitter.com/oceYPCL7cj

“this is why I still shit in the house, Barbara” pic. twitter. com/ gRJtNxEjNZ

I think this is photo-shopped, but it’s cute all the same.

Yep! That’s about the size of it !! pic. twitter .com/ xLBclgADKY