African Servals Get A Second Chance 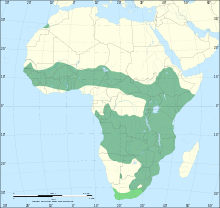 African Servals (Leptailurus serval) are beautiful cats and extremely successful hunters, which are currently doing well on most of the African continent. However, because of habitat loss and poaching, their numbers are declining in South Africa and they are extinct in the southern part of the country. Therefore a wild life sanctuary there has been working on rescuing the cats and later returning them to the wild.

The cats often come into the centre when their mother is poached, or are found after escaping when firebreaks are created.

Field biologist Alex Braczkowski narrates this video in which a cub, one of a pair of brothers, is followed from rescue to release.

The serval is mainly a nocturnal hunter to avoid being detected by larger predators. Although it is specialized for hunting rodents, it is an opportunistic predator whose diet also includes birds, hares, hyraxes, reptiles, insects, fish, and frogs. Over 90% of the serval’s prey weighs less than 200 g (7 oz). The serval eats very quickly, sometimes too quickly, causing it to gag and regurgitate due to clogging in the throat. Small prey are devoured whole. With larger prey, small bones are consumed, but organs and intestines are avoided along with fur, feathers, beaks, feet or hooves. The serval uses an effective plucking technique in which it repeatedly tosses captured birds in the air while simultaneously thrashing its head from side-to-side, removing mouthfuls of feathers, which it discards.

As part of its adaptations for hunting in the savannas, the serval boasts long legs (the longest of all cats, relative to body size) for jumping, which also help it achieve a top speed of 80 km/h (50 mph), and has large ears with acute hearing. Its long legs and neck allow the serval to see over tall grasses, while its ears are used to detect prey, even those burrowing underground. They have been known to dig into burrows in search of underground prey, and to leap 2 to 3 m (7 to 10 ft) into the air to grab birds in flight. While hunting, the serval may pause for up to 15 minutes at a time to listen with eyes closed. Its pounce is a distinctive and precise vertical ‘hop’, which may be an adaptation for capturing flushed birds. It is able to leap up to 3.6 m (12 ft) horizontally from a stationary position, landing precisely on target with sufficient force to stun or kill its prey upon impact. The serval is an efficient killer, catching prey on an average of 50% of attempts, compared to an average of 38% for leopards and 30% for lions.

The serval is extremely intelligent, and demonstrates remarkable problem-solving ability, making it notorious for getting into mischief, as well as easily outwitting its prey, and eluding other predators. The serval often plays with its captured prey for several minutes before consuming it. In most situations, it ferociously defends its food against attempted theft by others. Males can be more aggressive than females.