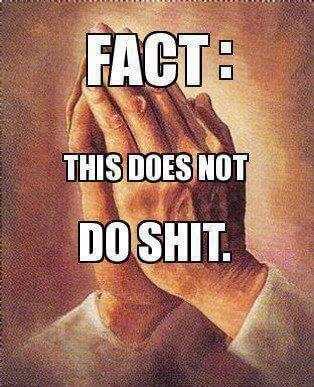 Twitter is still full of tweets about the massacre in Las Vegas. I’m still angry that so many people have to suffer and die because a small number of people want to make huge profits. They are death merchants.

Making firearms is a legitimate business if you are supplying the military and security forces of legitimate governments. There is also a genuine use in sport and hunting. Most other uses aren’t valid.

I’m not going to go on about the subject. Most of what I have to say is covered by the tweets. I would just be repeating myself.

One thing that isn’t covered enough in the tweets is religion. Almost every message is full of people telling us to pray for the victims. Most of you agree with me that prayer is a complete waste of time. There are many reasons for this, and I won’t go into all of them – it would take a whole book!

For a start, even if the particular god that people are praying to is real, the idea that He (it’s usually He) would help is delusional. Let’s stick to the Christian God that a majority in the US worship.

We’re told God has a plan for our lives. That plan has presumably been going for some time, and continues well into the future. Why would He suddenly change his plan because of a few prayers?

We’re also told that God doesn’t make mistakes. That means that this massacre is part of His plan, and because He did it, it’s good. That’s something that people should remember when they point to God as a moral authority too. This is a God who makes all the bad things happen, as well as the good things. God considers this massacre was the right thing to happen. Is He really someone who we can trust to make good moral decisions?

Prayer does nothing. Instead, if you can, use the time to do something to help. Donate a dollar to a good victim charity. If every USian gave just one dollar, and most can afford to do that, to a charity like the National Compassion Fund, it would be set for years to come.

Why you should not pray for the victims of disasters and massacres. Spend your time helping in whatever way you can instead, however small. pic.twitter.com/sJIFqV8TWS

THIS is the result of the Gun Control Lobby in the USA and the failure of politicians to stand up to them. They put money before people like these. People who are now dead. And it’s lovely that some of them believe they will see each other again in heaven. Maybe that’s how the NRA, politicians and others salve their consciences. But unfortunately it’s not true. The relationships are over for ever. Death is permanent. They are never going to be able to see, or talk to, or hold, the people they love again.

59 people lost their lives while attending a musical festival with their loved ones — here are some of their stories pic.twitter.com/mG42HanOfV

I’ve made this point on Heather’s Homilies in the past. I’m glad NOW THIS is saying it too because the message will get to many more people than I can reach.

In the US a man with a gun killed 59 people.

On the same day in France a man with a knife killed 2 people.

What a great response from the local community.

Taxis around Las Vegas are doing their part to support a community in crisis pic.twitter.com/fo172WYTy1

The statistics are shocking.

For too many, it’s never the right time to talk about gun violence.

How many have to die before it’s the right time to talk about gun violence? pic.twitter.com/b1Pa5oFi5W

I hadn’t thought of this before – the ease with which people can get guns in the US means they don’t need laws around assisted suicide.
(Via Ann German.)

Remember the day after 9/11, when politicians told us “Now isn’t the time to talk about terrorism”? Yeah, I don’t either. #LasVagasShooting pic.twitter.com/NU9un49Cni

There are a lot of these about …
(Via Ann German.)

When people try and do something about the problem, NRA stooges put the kibosh on it.

It was blocked by their AG days before it was due to go into effect. https://t.co/rQO077i4ny pic.twitter.com/r1chJzeV3Y

This is something that should be leading news bulletins, and most of us never hear about it.
(Via Ann German.)

Apparently there’ll be a press conference with “news” tomorrow on the status of the Russia Investigation by the US Senate Committee on Intelligence. Personally, I think this is probably little more than a public relations exercise. The GOP won’t allow anything substantive to come from this committee. My eggs are in the Mueller investigation basket. However, I hope I’m wrong.
(Via Ann German.)

Warner spox says “yes, there will be news” coming out of this press conference tomorrow on status of the SSCI’s Russia investigation. pic.twitter.com/CZ9TNlePqG

This is how President Trump hands out towels to disaster victims in Puerto Rico pic.twitter.com/be0Da5dPhs

And now onto the nice stuff! Look at this! Lovely!

The gardens of the Alcazar Palace – Seville, Spain pic.twitter.com/IaXZ4KouQb

In case my mother is looking in today, this is for her. My brother took her to Mt Rushmore in 1999 and it blew her away. Those two men look suspiciously like a bogey though. ????

How did he do it?

I’m not sure what’s really happening here – the caption can’t be correct. The Great Plague of London was in 1665, they used carts to transport the dead, and there were no cameras.

A child escaping from a hearse during the Great Plague of London, 1865. pic.twitter.com/iNNIQ2r7FD

Morbidity and mortality of leprosy in the Middle Ages https://t.co/5hHOK2GRjX pic.twitter.com/zP8kKiuXvg

Considering it was made around 1,000 years ago, the quality of this bowl is amazing.

This bowl is worth $37 million pic.twitter.com/FdRPb0is7K

Andromeda Galaxy. I always hoped I’d get to go there in my lifetime as a child. ???? There might be a colony on Mars before I’m dead, but I doubt they’d consider me fit to join it. ????

Galaxies swell due to explosive action of new stars https://t.co/Vb22G0htVs

I didn’t know trilobites had these. Very cool. And what a fantastic fossil!

I’m glad I’m not an Anglerfish!

5 young #hedgehogs brought in to us- no sign of mum ???? They are being cared for off site. Good luck little ones! #charitytuesday ???? pic.twitter.com/HVxUxmBJat

Owls are cool! This is one of my favourite tweets ever!

So, what would you do with your “gifts” from your owl?

What happened when an owl decided to thank a man for offering a helping hand https://t.co/8KB1hdqx3Q

We all need more hugs.

When your best friend is a raccoon.. pic.twitter.com/aQeYp5UQ9W

As long as the pet is happy, so are most people …

All the money spent on dog beds and he prefers to sleep like this… pic.twitter.com/J9rJquhHEQ

THIS cannot be a real dog!

LOOK AT THIS CUTE LITTLE BALL OF FLUFF pic.twitter.com/O6XCkn7VRG

It makes a good kitten bed, therefore that’s what it’s for.

“I have claimed you….you are now mine” pic.twitter.com/eaYR9aKI0A

There’s a lot of character in those faces!

When you tell them it’s time to go to the vet pic.twitter.com/Ga2ofgdVvc

This tweet was on WEIT this morning, but when I watched it there I couldn’t see the yellow thing. And besides, Jerry pinches my tweets all the time, so I’m allowed to pinch his!

And you have to watch the two videos in this post! The cats are awesome! (Did I really just use that word?)

The problems of being cat staff …

This is why I can’t make my bed in the morning pic.twitter.com/4lCW9RZv5C

Just making sure the staff get the right food.

A fellow Staples shopper I met this weekend pic.twitter.com/zV0Ei4MJ6m