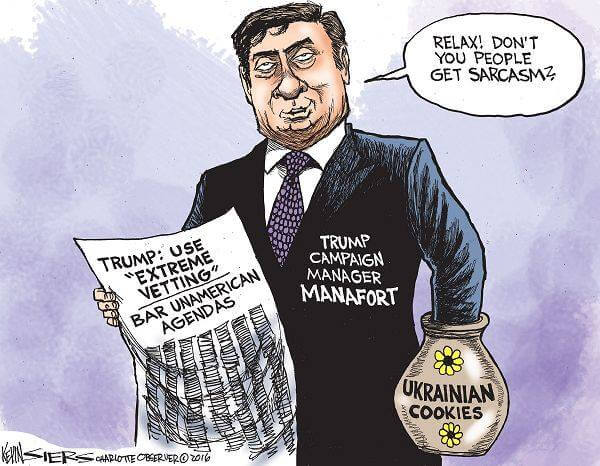 As you can imagine the Twitterverse is full of tweets about two things today: Halloween and the arrests resulting from the Mueller investigation. I predicted a couple of days ago that Paul Manafort would be the first arrest. Yesterday, though I didn’t say it anywhere publicly, I began to think there would be a second person. I had no idea who it would be though.

Now Manafort and the second person, who we now know is Rick Gates, have both pleaded Not Guilty. Manafort’s bail is US$10 million and Gates’s is US$5 million.

On Fox News, they’re saying Mueller will have a hard time getting a guilty verdict. Their opinion is it’s easy to get a grand jury in Washington DC to charge Republicans. The legal advisors on CNN though have been saying for some time that Mueller would not bring charges unless he was sure he could get a conviction, and that conviction was safe from appeal.

However, we also have the news that George Papadopolous pleaded guilty earlier this month. I would speculate that means Papadopolous probably has a deal to flip on a bigger fish. He’s described as a “cooperating witness.” Apparently that phrase can mean he was wearing a wire. If that’s the case, it may mean there are a lot more shoes to drop.

If indeed there was collusion between the Trump campaign and the Russian government, there must be many people in the White House who are very worried. CNN says:

Watching the developments unfold on the large television screens installed in his private residence, Trump was “seething,” according to a Republican close to the White House.

We’ll just have to wait and see what happens next. Legal processes move slowly, and they seem to move even more slowly when you’re waiting on the outcome.

As someone who replied to this tweet said, it could also be a Tory, or anyone else who still adheres to the fallacy of trickle-down economics!

Here’s a video of Trump saying he knows Putin. #TheResistance needs to get this on TV.@CNN @maddow @MSNBC @CBS @NBCpic.twitter.com/dMtfHvdfMf

Roland Martin: At what point will you wake up and realize you’re getting screwed? (VIDEO) pic.twitter.com/yip9r1wMe6

I tweeted this yesterday, but the joke is going to keep working!

This is the first tweet in a thread that provides extensive information about the Papadopolous charges.
(Via Ann German.)

This is extremely fluffing relevant right here. From the Papadopoulos indictment:

He was told by Campaign Supervisor that “a principal foreign policy focus of the Campaign was an improved relationship with Russia.” #MuellerMonday #MuellerTime pic.twitter.com/bpt1hKsvE7

Says it all.
(Via Ann German.)

If you go to the first tweet, you’ll see a whole lot more great replies to Kate Harding’s tweet.
(Via “Archie Debunker”)

“I am sorry for all the times I stabbed men, just a little, in my previous workplace. After years of counseling, I stopped stabbing men.”

“In the 90s, everyone was stabbing men, or chopping off their body parts. I understand now that this was wrong, but it explains the context”

“I’m not saying it’s good or bad, but it was the Bobbitt age.”

.
If it’s a legitimate stabbing, the male body has ways to try to shut that whole dying thing down.

if an infection is the result of a stabbing, look at it as a gift from god. Don’t punish an innocent infection for the crime of the stabbed

I prefer to call them…wait for it-#AntiBiotics !
(I’m sorry…it’s late)

Can men even be trusted to make the decision over their germs?? They can be pretty emotional..

I have stabbed men before, but not the man to whom I paid $32 mil.

If God hadn’t meant us to stab she wouldn’t make them so attractively stabbable. Or invented knives. Sure there’s a Bible verse somewhere

Some men are a bit overweight, but should be flattered by the stabbing. As it is perhaps the first time that they are being noticed.

How to identify that light in the sky pic.twitter.com/Rs0Eh592xe

Quite apart from anything else, the dollshouses are very cool. Fantastic work!

The dollhouses of death that changed forensic science https://t.co/4fozcx9TJR via @YouTube

Read it again!
(Via Ann German.)

I was so confused about what these lights do, then I reread the name #Fonterror2017 #Wtf #SundayFunday pic.twitter.com/nDpHzasnEM

Even if I could afford it, I wouldn’t go to Myanmar at the moment because of what they’re doing to the Rohingya Muslims. But if they ever sort themselves out, it would be a great place to visit.

Relationship Goals: Find someone who loves you even half as much as this crab loves onion rings. pic.twitter.com/I0yoFQhPUe

I’m glad I found Paul Bronks! His tweets are great!

When your best friend is a cow.

“Our cow wasn’t feeling good so last night,Myson went outside to spend time with her.I wokeup morningand found this” pic.twitter.com/Co4xCOAPPT

Did that guy really think shooing it away would work? Clearly stopping horses from getting in is not his area of expertise!

You can lead a horse to water but you can’t stop it from going shopping. pic.twitter.com/2loeRuQDCz

This time, the animal is the security guard it seems!

STOP! Who would enter the shop grocery must answer me these questions three, ere the goods inside he see. pic.twitter.com/GBqCyNVnUe

They can move really fast when they want to!

Sonic comes out of retirement pic.twitter.com/kFcsJNBYvB

This is why I prefer big dogs. Little ones like this so often have a bad attitude.

That’s what happens when you leave a pet alone with paper!

In light of the overwhelming evidence against him, Gary decided to confess. pic.twitter.com/bheZy4H7UA

Dog owners have this thing about humiliating their pets.

“is it a Panda? or a Dog? Or a Pandog?” pic.twitter.com/L2ipeeIMzF

When your wife gets home early and you have to pretend that you weren’t just about to try on her underwear. pic.twitter.com/tq4hR0H3wY

When you have to get your eighteen hours are day in, your staff are not going to stop you!

Don’t laugh at me! Bubbles are scary!

King of the jungle, ffs. pic.twitter.com/Sp9bNrLGxL

And a real sweetie to finish on! This is the kitten I want!