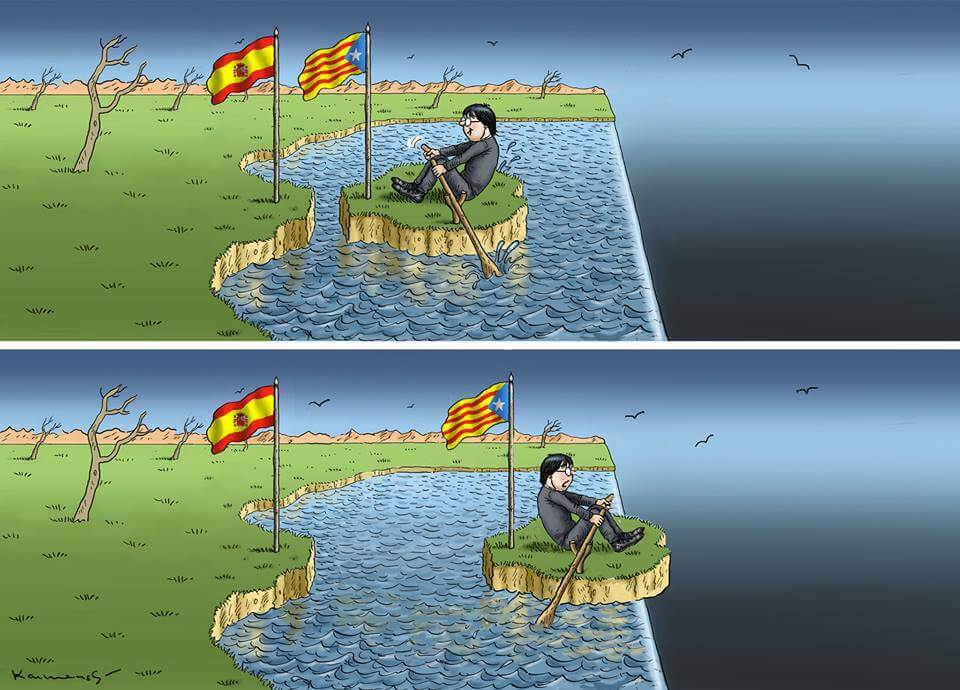 There aren’t many tweets about the situation unfolding in Spain regarding Catalonia. So, I put up a few myself. I find the whole thing extremely worrying as it’s hard to see how there can be a peaceful resolution at this point.

Personally, I oppose the calls for independence. However, the extreme heavy-handedness of the central government in Spain is appalling. Any government that perpetrates violence against its citizens loses in the credibility stakes.

I think the main reason there’s currently a call for secession is money. Spain was hit really had by the GFC in 2008 and is slow to recover. Some regions still have high levels of unemployment. Catalonia, however, is currently doing pretty well. The Catalans feel that they are not getting a lot back for the share of the taxes they pay. However, those in the region still enjoy a much better standard of living than others in Spain because of their better economy.

Some politicians have created bitterness and resentment in the population. They have played on old grievances from the time of the Franco regime. It’s the sort of populism we’re seeing in several places around the world. And depending on the underlying issues in a society, it’s working to a greater or lesser extent.

It’s a complex situation, so I thought I’d post a couple of tweets that try to explain the issues. Here they are:

Arguments for and against Catalan independence, Catalonian referendum https://t.co/QLhPHBSSCo via @YouTube

The situation in the US isn’t much better. There are even analysts predicting civil war in that country. I don’t think it will come to that, but something sure needs to be done to heal the divides there. Here’s some analysis by the Washington Post.

Tom Toles, not holding back. pic.twitter.com/41azP1ZvZl

We can’t let POTUS’s complete indifference to truth become ours. Constant barrage may be exhausting, but normalizing it is too dangerous.

This is a fantastic initiative. In the Christchurch earthquake in New Zealand, around half (I think) of the deaths were in one building which wasn’t properly designed. The architect skipped the country to escape prosecution. White collar criminals do far more damage than other criminals when you think of the number of lives they affect, but they often don’t face the consequences of their actions.

This group of cartoonists is using Mexico City’s earthquake rubble to shine a light on corruption. pic.twitter.com/rzl6UsRdEu

Wait for it: Monday US time.
(Via Ann German.)

Now you know why the horseshit uranium story was getting pushed so hard https://t.co/WpFuIopvcn

I guess they should’ve included a trigger warning in the report on Mueller’s first indictments … pic.twitter.com/sfv0wSU24y

And Twitter isn’t happy with him as a result.

I’m picking that the first person to be indicted by the Mueller investigation will be Paul Manafort.
(Via Ann German.)

Thought in light of todays news this would be very fitting.
This is amazing. #MuellerTime #Comeyday pic.twitter.com/67x9M76bUG

I really can’t believe that the GOP is trying to make something out of the Uranium One story! There’s nothing there! Clinton had nothing to do with it! Even if she had, she couldn’t make the decision on her own. The State Department was one of nine agencies to give their approval to the deal.
(Via Ann German.)

These @seanhannity tweets telegraph the strategy of obfuscation, distraction & lies that pro-Trump media will employ as Mueller advances: pic.twitter.com/xgZHgjWccS

It was Clintonses who COLLRUDED! Not us! No, not us precious! Hurry Whannity, tweets us REAL NEWS! Hillbo dids it! SHE is wicked- and FALSE! pic.twitter.com/4X5OUqlKIj

The man is a complete buffoon. It amazes me that there are people out there who take him seriously. Even worse, that one of them is the president of the most powerful country in the world.

This is a fantastic initiative. It would be great if there were more like this.
(Via “Archie Debunker”.)

THIS IS AMAZING. We need this everywhere, all around the world. pic.twitter.com/KZDV2ABijs

The US is going backwards when it comes to human rights thanks to Trump and his cronies in the GOP.

This should not happen in a modern democracy where rule of law reigns supreme.

Another part in the series about ISOLDE at CERN.

This TED talk is about 16 minutes long, but it’s not bad if you have the time.

The next sex scandal to hit Hollywood, and you can bet it extends beyond there.

Sorry, but this is just fu€king ridiculous! I know there’s still a lot of racism in the US, but the idea that people are only taking notice of Harvey Weinstein because his victims are white is stupid. Hello! Anybody heard of Bill Cosby? Most of his victims were women of colour. Intersectional feminists give the rest of us a bad name.

Women of color are being left out of sexual assault conversations in the wake of the Harvey Weinstein scandal pic.twitter.com/8H5sQDeJDj

He still looks like a boy! Must be an alien!

Leonardo Dicaprio and Kate Winslet, then and now. pic.twitter.com/XdCPFDMSNL

What would you do?

Amazon accidentally shipped this couple over 60 pounds of weed ???? pic.twitter.com/b9MBALBpeK

The terracotta warriors are amazing – each one has a different face. It’s amazing what wastage belief in an afterlife leads to. Still, I’m glad we get to see these sculptures.

Many of you will have seen the first of these three clips from Blue Planet II, which will be on our screens in NZ starting in late November. They’re all great though. I can’t wait for the series!

Filming Walrus With The Megadome – Blue Planet II – Behind The Scenes https://t.co/IGYRp5Lgi4 via @YouTube

What a great woman! Look at her stroking that hedgehog in her lap as if it’s a cat. ???? The world needs more people like Joan Lockley!

Great video of a water vole in its natural habitat.

Water Voles having fun in the sun:
with @GwentWildlife
Votes needed UK only:
Vote: https://t.co/BbessfB8yL
–https://t.co/rjXB4Fq5Nw

Okay, I admit it, kids are cute!

The kids are alright. pic.twitter.com/fsIv7cNIUs

This is for my sister Brenda. ❤️

“He just found out that he is, in fact, a good boy” pic.twitter.com/yCTcW2MEQh

It’s got the moves, though the style needs perfecting!

Digging for the first time pic.twitter.com/VoYumJOx4J

I hope none of them get motion sickness!

… I just couldn’t pick one. pic.twitter.com/u0KISZXLS4

Puppies can be almost as cute as kittens!

“I think he just discovered his toes” pic.twitter.com/Y6N9UQX1PN

It doesn’t get any better than this! What a wonderful video!
(Via Ann German.)

Here’s a longer video of the snow leopard cub with its mum. You can read more about it here.

This video is from Facebook rather than Twitter. It’s my cousin Tristanne’s cat, Ngeru, which is Maori for cat. (Pronounced, roughly, near-roo.) The video is actually to show us the great view and peaceful location. So the cat, realizing it’s not the star of the show, takes off part way through!

We used to have a cat that rode on the dashboard, but I’ve never seen this!

The right way to make the trip to the vet? pic.twitter.com/69s0WiyYHj

when you get a surprise kiss pic.twitter.com/fAVHqDLFp0