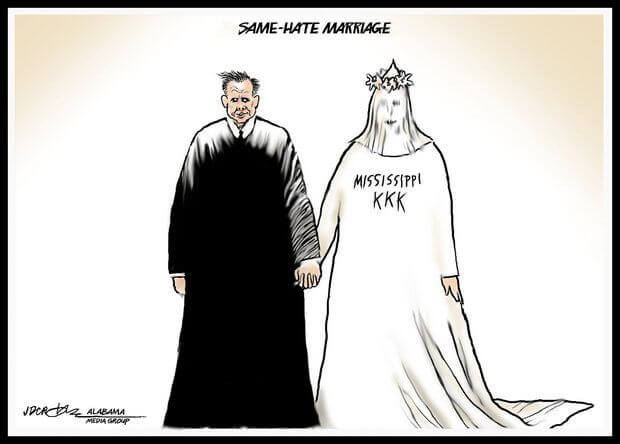 I can’t remember what I was going to write about in today’s tweets post. I knew at 2am, but went back to sleep for a while and I’ve forgotten. Further, if I’d gotten up to write it down, I might have noticed that I’d left the oven on! Instead it was 9am before I realized!

So instead I’ll write about the selection of Roy Moore as the Republican candidate for the vacant Alabama Senate seat. Until Trump thought Jeff Sessions would make a good Attorney-General, he’d held the seat since 1996. He and Richard Shelby have held the state for the GOP since then, and there’s a strong chance Moore will continue that trend.

The Democratic candidate for the seat, US Attorney Doug Jones, is eminently capable and electable. Republicans choice of Moore to run against him may not go well. Although Trump won the state by more than 28 points in last year’s election and the state has been red for over twenty years, there’s a lot not to like about Moore.

If the GOP loses this seat, it will be because of Moore. In the primary the so-called establishment led by Senate leader Mitch McConnell put their backing and millions of dollars behind caretaker senator Luther Strange. They even got Trump to lead a rally for him. They knew that when it came to the election, Strange would be a much tougher candidate to beat. When it comes to a general election, Moore may be too conservative, even for Alabama.

However, people like Sarah Palin, Sean Hannity, Steve Bannon, Sebastian Gorka, Ben Carson and Nigel Farage all support Moore. Moore’s an Evangelical and Dominionist, and the right-wing of the GOP love him. Now that Moore has won the primary, Trump is backing him too. He’s even deleted a few of his old tweets supporting Strange.

It will be hard to get anyone other than Evangelicals to vote for Moore. But, there are a lot of them in Alabama. According to Pew Research, 49% of people in Alabama are Evangelicals.

When it comes to religion at least, Alabama is a very conservative state. 77% say religion is “very important” to them, and another 13% say it’s “somewhat important.” More than half the population attends church at least once a week, and 73% pray at least daily. 51% of people in Alabama say that the “Word of God should be taken literally” and most believe in heaven (84%) and hell (72%). The majority also oppose abortion (58%), homosexuality (52%), and same-sex marriage (57%). 49% think humans have always existed in their current form, and of the 44% who accept evolution, 26% think we evolved due to God’s design. Only 18% think evolution was by “natural processes.”

As Charles Pierce writes in Esquire:

Moore lost his job as chief justice of that state’s supreme court twice; on both occasions, he lost it by flaunting the authority of the federal court system …

The first time was because of his refusal to remove a monument to the Ten Commandments from the State Capitol, and the second was for refusing to allow same-sex marriage following the US Supreme Court ruling that is was constitutional.

So if he wins, there will be a US senator who refuses to follow the law and he makes no apology for that. He firmly believes his god’s law comes before any man-made law. He has publicly said on multiple occasions that (his) God must be brought back into government. He believes that (his) God is the “basic source of our morality.”

Mic notes several of his quotes, including:

• In 2012, Moore said same-sex marriage would lead to the ultimate destruction of the country.

• In 2002, he wrote homosexual parents were “detrimental to the children.”
He compared the Quran to Mein Kampf, Adolf Hitler’s autobiography, in 2006.

• CNN found that as late as December, Moore did not believe Barack Obama was born in the U.S.

He’s also said, “Sodomy is against the law of nature.”

Like those who support him, this is not someone that should be anywhere near power. Let’s hope a majority of the people of Alabama can see that.

This is fun!
(Via Ann German.)

#RoyMoore is a reminder that America’s problem with electing ridiculous clowns who pander to ignorance didn’t start & won’t end with Trump.

His supporters think pulling out a gun at a political rally is praiseworthy! (This would get him arrested in New Zealand.)

The same people think these are reasons to vote for him, instead of against him.

Good God. I don’t care how deep and how red the state, this monster should never represent an American state in the US Senate. #RoyMoore pic.twitter.com/R9fHglsNyL

Unfortunately, this is probably true.

Anyone who is saying #RoyMoore is not going to DC yet I have a simple answer:
It is ALABAMA folks.

I don’t get how USians know this, but enough still gave him their vote to get him into the most powerful job in the world. (Though, to be fair, he’s abrogated a lot of that power since taking over!)
(Via Ann German.)

Poll of the top 20 words used to describe trump and it looks like he’s the victim of his own ugly campaign tactics. pic.twitter.com/UfsKAbWH7Y

Dear NFL players, please go to Puerto Rico and kneel to trick @realDonaldTrump into focusing on what the fuck he should be focusing on.

It cannot become normal that a man like this is suitable for one of the highest offices in the world.

Trump has a problem with Puerto Rico’s ‘massive debt’ – but $33 million of it came from his failed golf course there pic.twitter.com/FF584aQITc

Two young women make a video in support of the White Wednesday campaign in Iran after their first time joining the weekly march.

For those who don’t know, women in Iran have to wear certain clothes in public, including a hijab (scarf) covering their hair. Gangs of men are employed by the government to drive around looking for women who are not properly covered.

The White Wednesday campaigners want to have the choice whether or not to wear a hijab, and ultimately other clothing as well. To show they are part of the campaign, they wear a white hijab on Wednesdays.

There was no restriction on women’s clothing before the Iranian Revolution in 1978-9.

What is wrong with some USians? When are these racist fu€kwit$ going to get over themselves?

According to Wikipedia, Pine Island Glacier is “the fastest melting glacier in Antarctica, responsible for about 25% of Antarctica’s ice loss.”

I mostly post these science tweets for the cool pics! 🙂

Research sheds new light on how Earth and Mars were created https://t.co/FGDOBzMUxj pic.twitter.com/Ym33ZVXuMZ

This is the best one though!!!

A water droplet bouncing on a surface of water filmed with a high fps camera pic.twitter.com/qrdpQo7AIh

Yet another very cool pic. What would we do without science?

In this rare image, NASA’s Cassini spacecraft has captured Saturn’s rings and our planet Earth and its moon in the same frame. pic.twitter.com/agsdt96e4v

A lovely spot in Canada.

I don’t know this for sure, but I am guessing that these ships are there deliberately to create an artificial reef and encourage the growth of a new reef.

Abandoned ships in a sand bar, in the Bermuda Triangle pic.twitter.com/frFHg7bhbl

This is very cool! I’d love to do this to a tree at my place, but someone else would have to do the work. I always put up lots of lights and have a tree at Christmas because the kids (nieces and nephews) love it, and I see cars with kids in the back stopping to look.

A tree covered in a thousand fairy lights in Utah, USA. pic.twitter.com/n2fFQUqGWh

I love this! Looks like something Elven out of Lord of the Rings.

I want a TARDIS so I can go back and see places like this. Travelling with David Tennant would be pretty nice too!

The junction of Glasshouse Street and Regent Street in London, 1927. pic.twitter.com/8rK9p9ltIr

There’s a song about Paris in the springtime isn’t there? This is another place on my bucket list.

I had to put this in because it’s New Zealand, but I would prefer it without all the bikini-clad models getting in the way of the scenery!

Luke, I am your father!

The making of ‘Star Wars The Empire Strikes Back’. C. 1979. pic.twitter.com/TaUq2BgLNa

Guatemalan turkey. Are they the same as other turkeys? I don’t know but I’m sure some of you do.

If only it were true that love always wins. Nice story still.

A treat for us and the bat!

How many retweets for this little cutie? pic.twitter.com/8IXPDhsbMt

I think there are my favourite cats. but it’s so hard to choose there are so many gorgeous ones.

Here’s some video of these cuties.

And now for something completely different: Sand cats! These kittens were recently spotted in the Moroccan Sahara: https://t.co/SL2PFjOqcK pic.twitter.com/wByMeI5xp5

Jaguars are amazing too.

Footage of the #jaguar family we’ve been following in Belize since right before Hurricane Earl in 2016. The story: https://t.co/zKYN3I1zEq pic.twitter.com/Vek4OXO5kj

It’s #tigertuesday! This Bengal tiger was spotted resting on a rock in Kanha National Park in Madhya Pradesh, India. pic.twitter.com/mcUSvejBqN