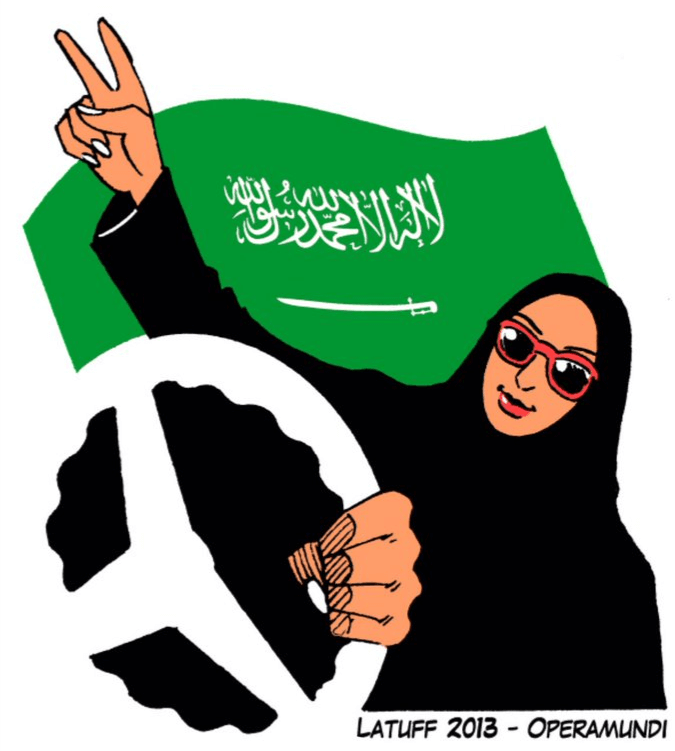 As you can see, there’s a new name in the title: Homily. I’m not sure how that’s going to work – I’m just trying it on for size at this stage. The content of the post won’t change. There’ll still be plenty of tweets on display.

The big news of the day for me is that women in Saudi Arabia can drive. It comes about because of the issuing of a decree by King Salman. By June 2018, the processes must be in place to issue licenses to women. There are screeds of tweets celebrating the change, and I’ve put a few in the Human Rights Tweets section right below the homily.

Prince Khaled bin Salman, the Saudi ambassador to the UN made the announcement there. (There’s video of him doing so at the BBC link below.)

There are, of course, men complaining about this. They consider the lifting of the ban to be in opposition to the Qur’an. According to the BBC, a tweet from one critic says:

As far as I remember, Sharia scholars have said it was haram (forbidden) for women to drive. How come it has suddenly become halal (permissible)?

Here’s what some of them said in the past:

These Saudi misogynists must be freaking out that women might be able to drive in 2018. pic.twitter.com/85jnJxVBTj

There are about 1.6 billion Muslims and most of them consider there to be no issue with women driving. It is only the Salafis and other conservative sects who feel this way. I’m not really sure how they can use the Qur’an to justify their opinion – there weren’t a lot of cars around when it was written.

Other men and women, who have been campaigning for change for years, are reacting differently. From the BBC:

Activist Sahar Nassif in Jeddah told the BBC she was “very, very excited – jumping up and down and laughing”.

“I’m going to buy my dream car, a convertible Mustang, and it’s going to be black and yellow,” she said.

The men opposing the decision worry that women driving is the thin edge of the wedge. It’s not – that was a couple of years when women in that country got the right to vote. More will come.

Women in Saudi Arabia have a long way to go before they reach equality with men. Only around 20% of them work for example despite having a higher level of education on average than the men of their country. But, it will happen. When I think of the changes just in my lifetime, you can see that it can happen. It also happens quicker than you would expect. For example, how many people just 25 years ago would guess that same-sex marriage would be legal?

You want a statement here is one: “Saudi Arabia will never be the same again. The rain begins with a single drop” #Women2Drive ❤️

So happy to see #Women2Drive become real. Time to trhow this joke to history dump pic.twitter.com/3flONTVy4c

I’m so happy for the women in Saudi Arabia. Negative commenters, please bye. Slow progress is better than none. #SaudiArabia #Women2Drive

Women in Iran are celebrating the success of their sisters in Saudi Arabia. Unlike their male leaders, they’re not worrying about Sunni vs Shi’a.

We will remove compulsory hijab laws too! After years of fighting Saudi wome succeeded. driving ban will be lifted. #WhiteWednsdays pic.twitter.com/juzsYFM38O

In the last few days there’s been a trend among journalists to acknowledge how hard they were on Hillary Clinton during the election campaign. I’m very happy to see this, as it’s something I wrote about at the time. This is one of the tweets about that, showing some evidence of what happened.
(Via Ann German.)

gained an entire new respect for @AriMelber @TheBeatWithAri #TheBeat he may just be the 1st and only Media person to EVER acknowledge this pic.twitter.com/9H0r9BMNll

It seems there’s no type of protest a black person in the US can make that some white people will think is okay. When you’re white, you can march with tiki torches and President Trump assumes some of you are fine people. A black person quietly kneeling to protest racial violence is a son-of-a-bitch that should be fired.

Watch this if you think #TakeAKnee protests are ‘disrespecting the flag’ pic.twitter.com/paFab0v0TJ

I wrote about this yesterday, but here’s some more. I can’t help thinking a lot of the noise around the #TakeTheKnee protest by Trump is to divert attention from all the things that are coming out about wrong-doings in his White House.

White House figures like Ivanka, Jared Kushner, and others have been using private e-mail accounts because irony is dead pic.twitter.com/MBJzI8hi0I

Roy Moore won in Alabama. As the Washington Post says, he’s a:

The man who just won the primary for Jeff Sessions’ Senate seat is bad news for equality, but good news for Steve Bannon pic.twitter.com/snM65LlwTa

The Puerto Ricans have a terrible few years ahead of them as they recover from the damage wrought by Hurricane Irma.

Mr. President shut the fuck up about NFL. Do something about our people in need in #PuertoRico. We are American citizens too.

Cool gadget. Now you just have to make sure you have a computer and electricity on that desert island.

What a great way to brighten up the ‘hood!

A Color Spectrum Stairwell in Lima Painted by ‘Xomatok’ pic.twitter.com/g3fKKLeafx

Neil deGrasse Tyson is here to spoil Game of Thrones for you pic.twitter.com/t5FjzFB5Mx

Clowns are creepy, and this is just plain stupid.

Burger King is trying to get ‘It’ banned in Russia because they think it promotes McDonald’s pic.twitter.com/qld6xqhikx

You can always rely on your dog to be happy to see you, whatever else is happening in your life.

Personally I agree with the Pit Bull ban, but it’s really sad when one has been brought up properly and a situation like this occurs.

Patrick Stewart fell in love with this pit bull — but he’s being forced to give her up because they’re banned in the U.K. ???? @wagsandwalks pic.twitter.com/D0cVCLxiBx

This is so sad.

I’ve got a friend who’s going to have something to say about so many dog tweets, but I had to put this one in! (You have to admit this is a good one!)

The only video that matters right now pic.twitter.com/KJ0VsC01Hk

This hedgehog has a pretty active night life! And keep a look out for the cat and mouse!

‘A night in the life’ of a Hedgehog: #Nature #RatedAwww
–https://t.co/5o43lhJxau

I wish one of them had a red nose!

Did you think there weren’t going to be any? There will always be cat tweets. They’re like dessert – the best comes at the end.

A kitten-size box. Give me an Awww …

I am cat! (Without reading the article, I’m assuming this is a police dog training academy or similar.)

How can this cat be so relaxed? Look where it is! https://t.co/A9oCJslWbG

Ha! Look at those eyebrows!

It’s the thought that counts!

he tried and that’s all that matters. pic.twitter.com/YIL6MZ8YVL

Once again, there’s nothing cuter than a kitten …

waiting for my packages to be delivered like pic.twitter.com/LBawhyOtXk