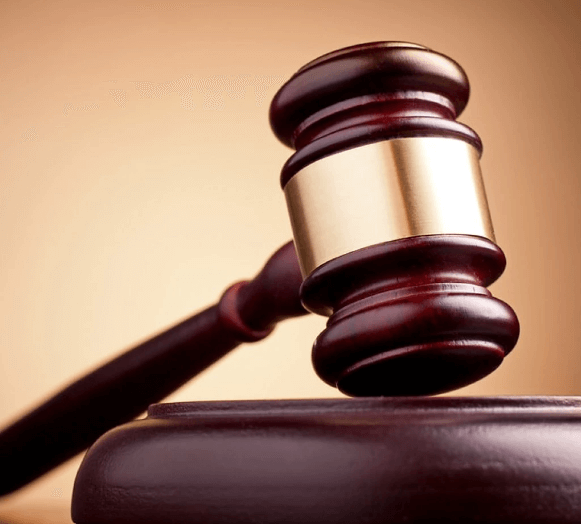 One of the tweets Ann German brought to my attention today is about the judicial system in Mississippi. The situation is so outrageous that I feel I have to do more than just present the tweet.

A poor, young, woman had a baby. When the baby was four months old, she and the baby were passengers in a car that was pulled over in a traffic stop. (The baby was properly secured in a car seat.) When the officer made a check on her he found both women had quite a few unpaid fines and so he arrested them. Why he was checking on the passenger as well as the driver is an unanswered question.

You think this is bad? I haven’t even got to the most outrageous part of the story yet.

Next, the mother came up before the judge. He forbade her from seeing her baby until all her fines were paid! The baby is now 18 months old. It’s mother hadn’t seen it for fourteen months until recent intervention by an attorney from the MacArthur Center. This would never have happened if she wasn’t poor.

While looking into this mother’s case, the attorney made the discovery that this sort of thing is common in Mississippi. This particular judge was one of the worst and has now resigned.

There are other rorts going on in the Mississippi Justice system, such as the requirement for those on probation to pay fees to the contractors who supervise them! You can read more by going to the link in the tweet below.

First, let me remind you that this is the richest, most powerful country that the world has ever seen. The US holds itself up as an example to the rest of the world – the “shining city on the hill.” Its government criticizes the systems in the EU, Great Britain, Canada, and New Zealand, where this would never happen.

Allow me to introduce you to the outrage of the day: https://t.co/gQgbzgGKrp

I used to go through and regularly purge anyone that hadn’t sent out a tweet for more than six months, though I admit it’s a few months since I last did it. Looks like Trump prefers to keep the fake ones to boost his numbers.
(Via Ann German.)

Almost half of @realDonaldTrump’s Twitter followers haven’t tweeted in over a year, meaning they are FAKE accounts. https://t.co/PEP5aZxRGl

Donald Trump is releasing most of the JFK files. I think this might be the first good thing Trump has done. However, his reputation precedes him!

It’s possible now that a majority of US states will make marijuana legal while the federal government continues to insist it should be illegal. In fact, AG Jeff Sessions is actually blocking research on marijuana! That will create the situation where it’s Republican states that are refusing to cooperate with the Trump administration in some situations, not just Democratic ones. That is already happening over the ridiculous Voter Fraud investigation of course, but this would be far more serious.

Believe it or not, Republican support for marijuana is at an all-time high pic.twitter.com/0w0FcBBO7j

Vladimir Putin is an a$$hole! With this veto at the UN, he’s basically given Bashir al-Assad new support for his murderous regime.
Warning: This video contains very distressing images of children suffering from a Sarin gas attack.

Russia vetoed a UN resolution to extend the official mission investigating the use of chemical weapons in Syria. pic.twitter.com/i29fEKW56T

Now here’s some good news! I was going to put this in as a Human Rights tweet, but it was religion that was the root cause of the problem.

This gives a new meaning to the phrase “dumpster diving.”

The amount of trash in the ocean off Honduras is horrifying pic.twitter.com/gsvtmRIDzA

Cool sketch showing the similarities between the five apes.

France is one of the top countries on my bucket list. There’s so much there I want to see.

Another amazing temple in Thailand.

The earth and the sun to scale.

I’m not sure why USians put this in the “LOLBOOK” category. It’s serious and important work to protect endangered species, and it’s great the Mexican government gets involved.
(Via Ann German,)

A fantastic “good news” story – restoring water voles into northern England. “Ratty” in The Wind in the Willows by Kenneth Grahame was a water vole. Check out this site for a cool water colour of Ratty.

Thank you to everyone who has voted in Aviva awards! We’ve applied for £5k award which means more votes needed!! https://t.co/HMTjUjV9tL pic.twitter.com/WdHemRfLuf

I’m not sure what this is due to it’s age. Can anyone tell me?
(Via Ann German.)

Owls are so cute!
(Via Ann German.)

When you forgot your towel after having a shower…. pic.twitter.com/flHyOHDfAn

Those of you who follow Why Evolution is True may remember this video from a while ago, but it’s nice to see it again.

Having fun when you’re a dog! I’ve got video of my brother’s kids doing this too!

Meet Paddles, the First Cat of New Zealand. We met Paddles during the election campaign. He was very popular then too. His staff are new Prime Minister Jacinda Ardern and her partner, Clarke Gayford. While they are members of the Labour Party of course, Paddles declares himself to be independent. Former Mormon Ardern is now an agnostic, which means she’s not yet quite up to outing herself as an atheist, but she has the right pet for the club!

Hi, I’m Paddles and I am the First Cat of New Zealand. I have opposable thumbs, I’m purrty special. pic.twitter.com/MPkxdhWCRu

This was Paddles on Election Night with his staff, and future prime minister, Jacinda Ardern.

Thanks Mum for bringing me out so I can speak to the press. Must give the people what they want – and what they want is me. Prrrrp ❤️ pic.twitter.com/uiA1jk3qeN

???? Very Cool! ???? And I’m glad the size of your audience doesn’t matter, or I would have given up on this website a long time ago. It’s months since my subscriber numbers went up! ????
(Via Ann German.)

A tweet from @catsnkittys directed me to a post where an Aussie artist Rachel Aslett has matched a whole lot of internet cat pics with old pin-up girls pics. They’re pretty cool, so I’ve copied 25 of them into a slide show for you. 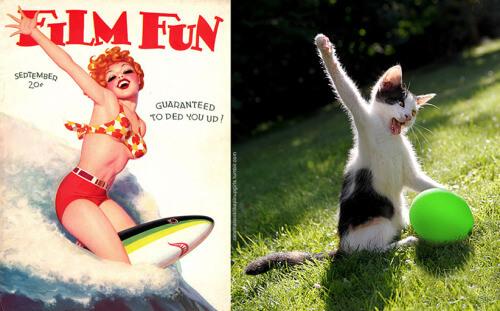 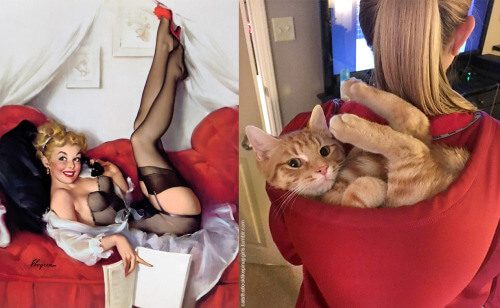 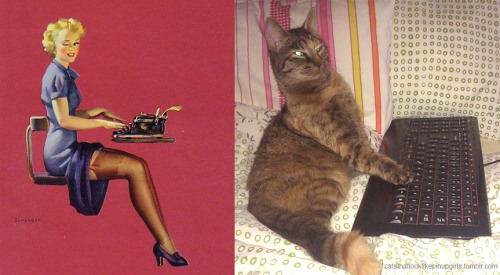 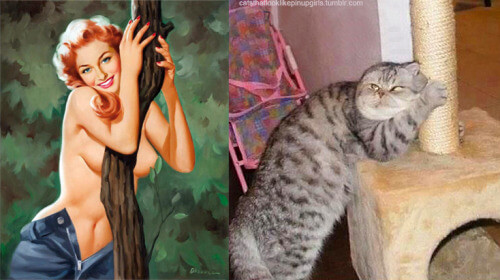 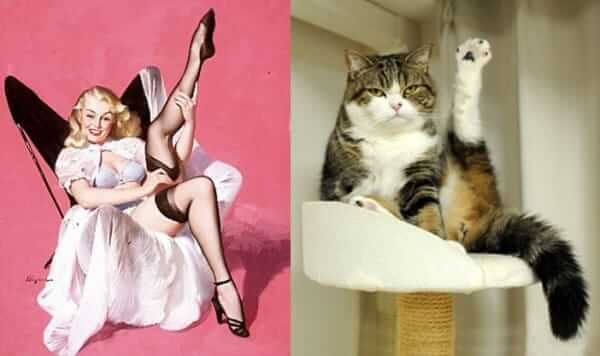 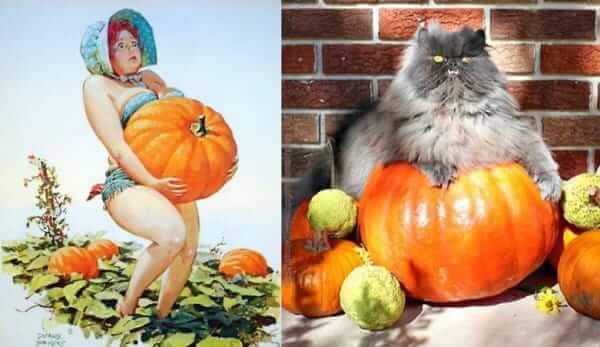 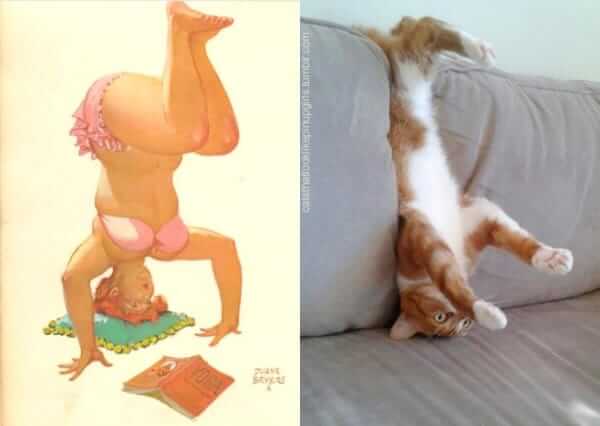 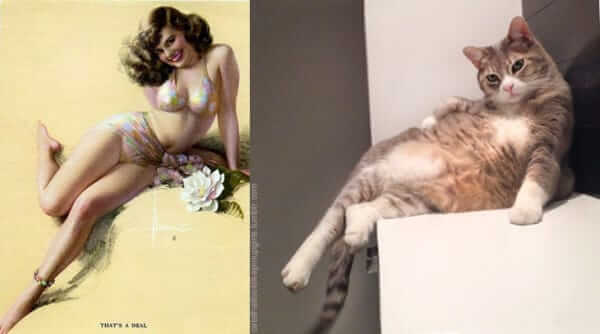 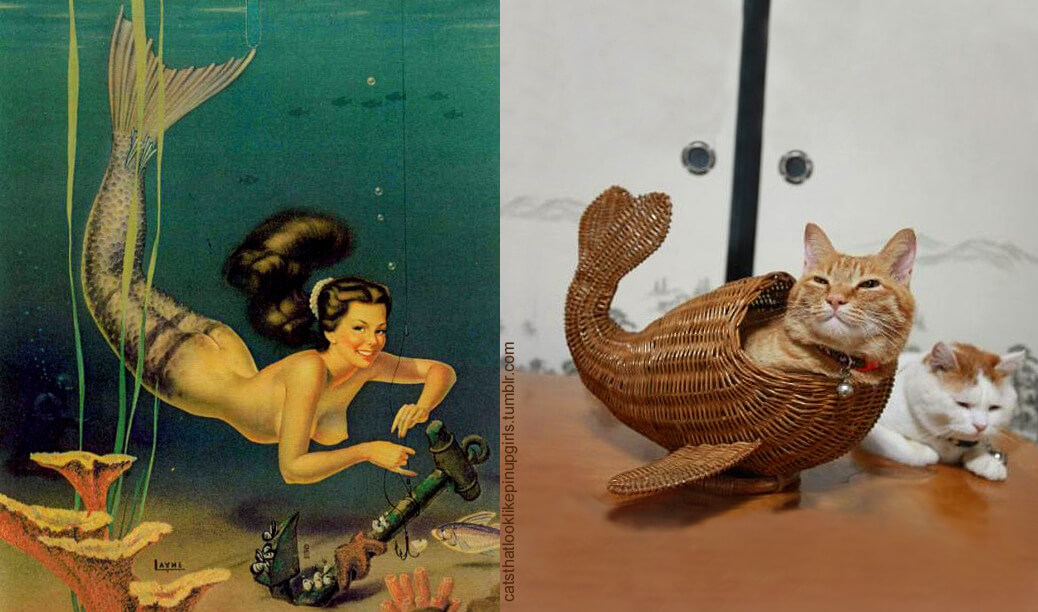 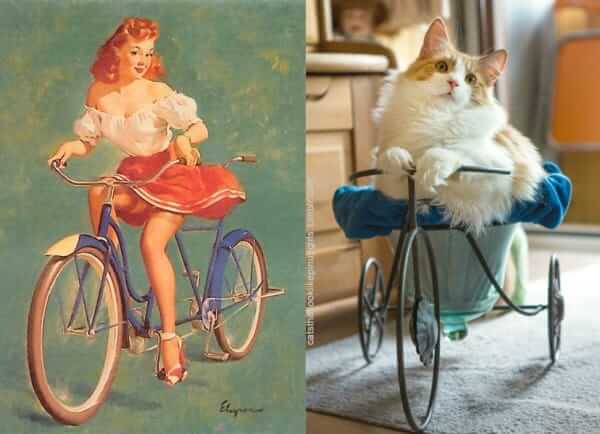 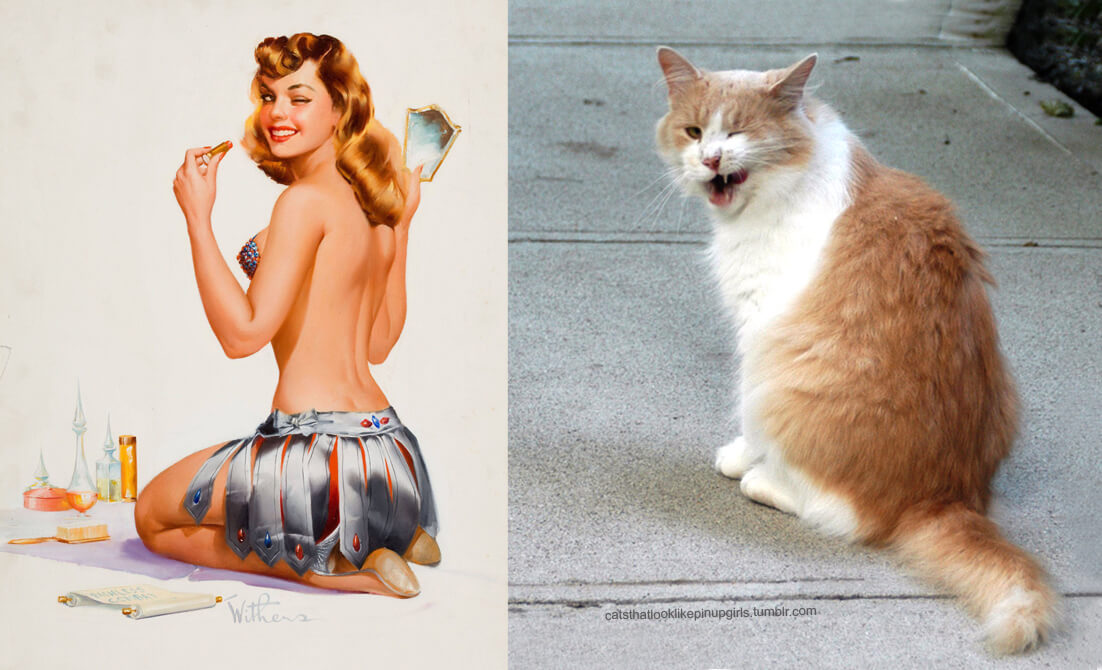 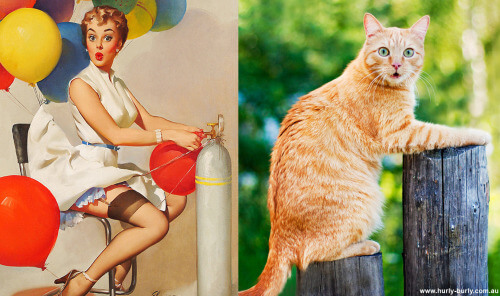 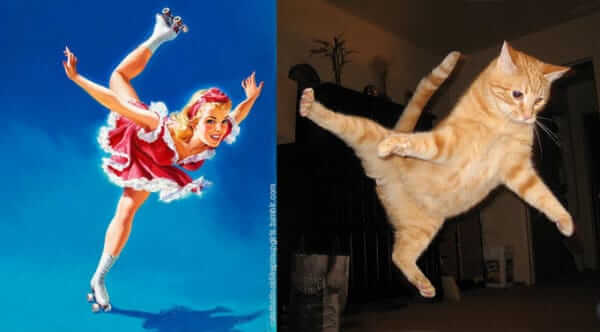 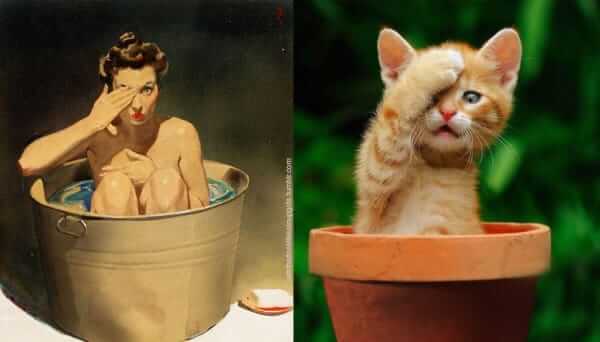 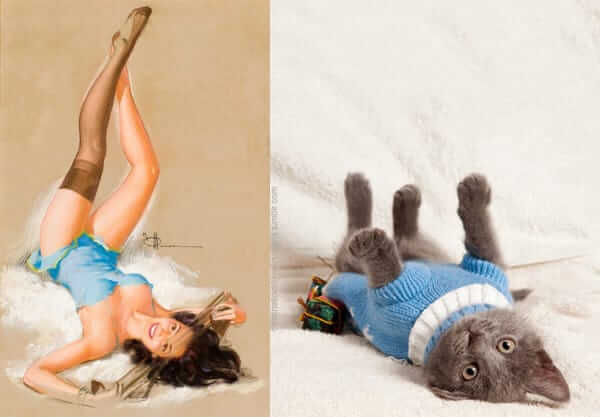 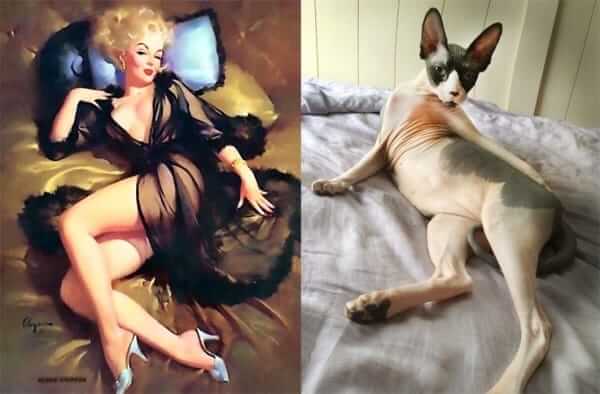 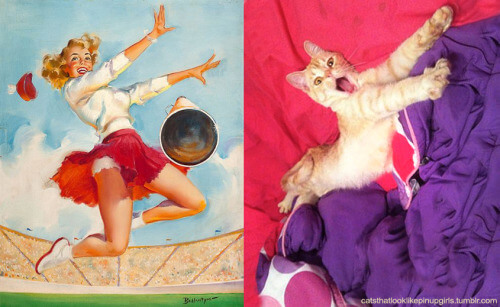 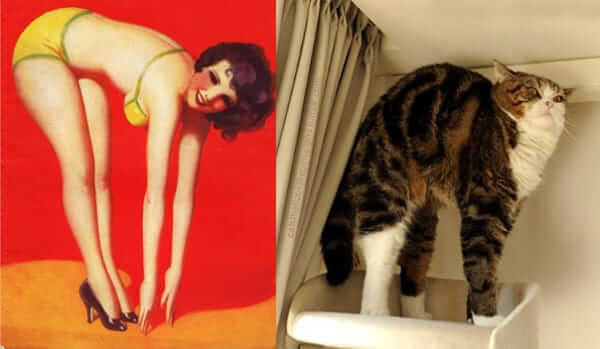 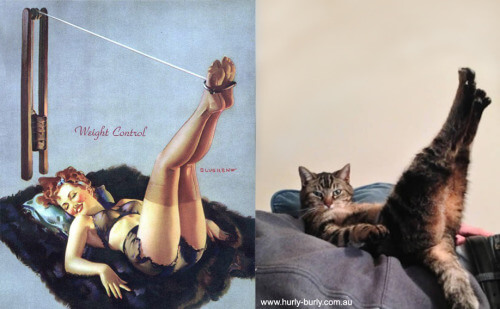 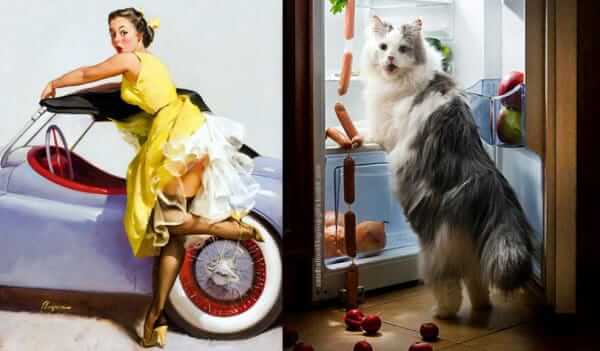 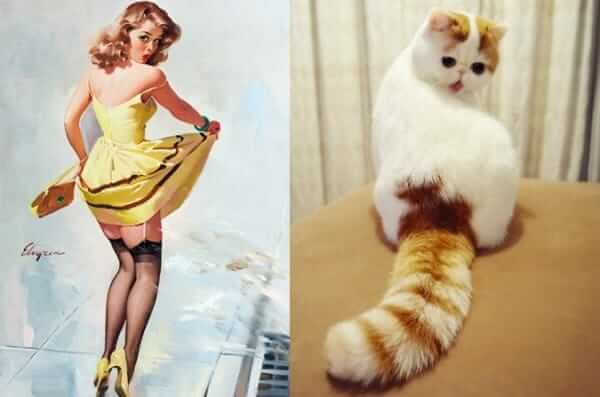 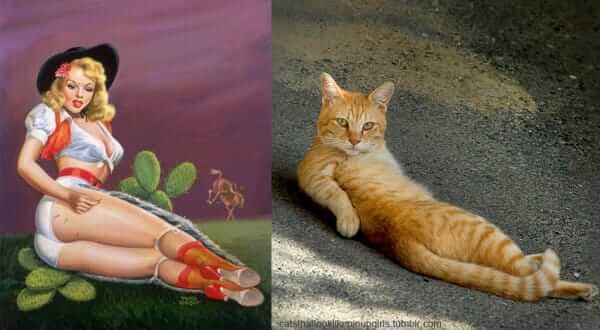