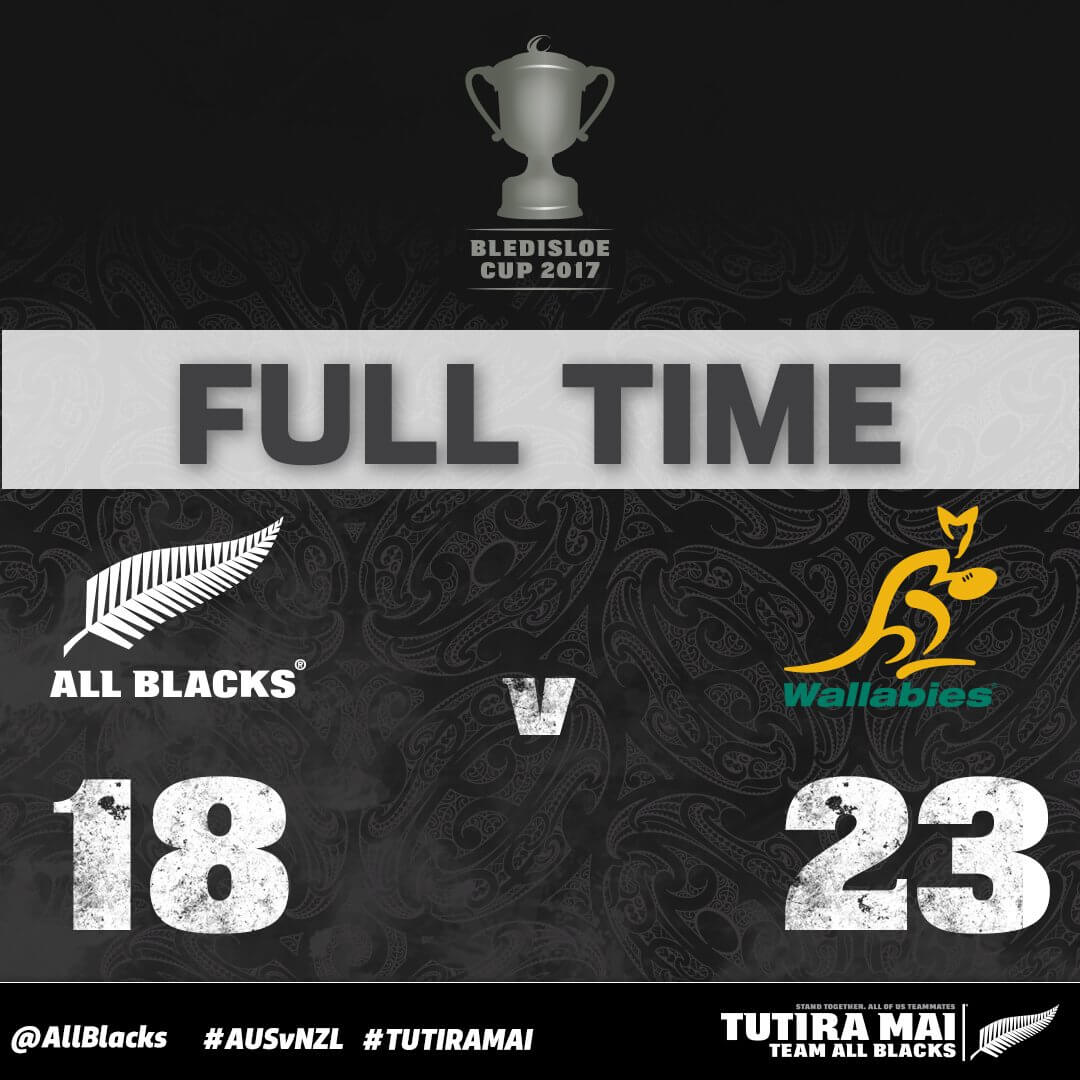 Things are not looking good in New Zealand. We’ve finally got a government, but the only people it’s ideal for are Winston Peters and his voters. The weather is gloomy after several days of lovely sunshine. And, worst of all, the All Blacks LOST! There are, of course, lots of tweets about both the rugby and the government in the Twitterverse in New Zealand.

The All Blacks losig is a guaranteed way of sending the country into doom and gloom, even if most of them weren’t already unhappy about Winnie (Winston Peters of the NZ First political party).

I had a short debate with reader Ken about our government in the comments here, It didn’t go that well because I was so grumpy about the whole thing I was, quite unfairly, not very nice to him. So I think it’s probably better if I stay off the topic for now.

As for the rugby. Woe is me! I’m just glad I didn’t watch the whole game. It didn’t start until after 10 pm NZ Time because it was in Melbourne, so I went to bed at half time. It sounds like a frustrating match from a NZ point of view.

Trump tells is he’s a genius …

The genius of #Trump … pic.twitter.com/axURL3Kl2P

Trump has no insight, and will do his best to make anything fit his agenda. 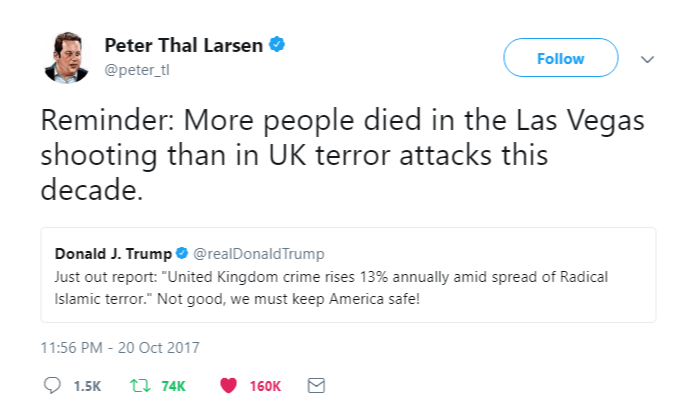 This is the sort of thing that will keep happening because of the stupidity of Trump.

And this is the sort of person enough people is Georgia voted for that she’s a state representative!
(Via Ann German.)

GEORGIA: State Rep Suggests Quarantining People With HIV Because They Don’t “Die As Readily” As Before – https://t.co/hkfvy32xiG pic.twitter.com/s7IEboqnlE

One of the few things that is good about New Zealand’s new government is that we get a referendum on the legalisation of marijuana. So, this tweet piqued my interest.

Melissa Etheridge was busted for weed possession and had the BEST mugshot pic.twitter.com/YR4WZK57AU

I wanted to show you this tweet and the comment it includes, but the person who posted it is someone who only lets certain people see their tweets. Thus, I’ve copied the tweet and blocked their name. You won’t be able to open the tweet yourself. 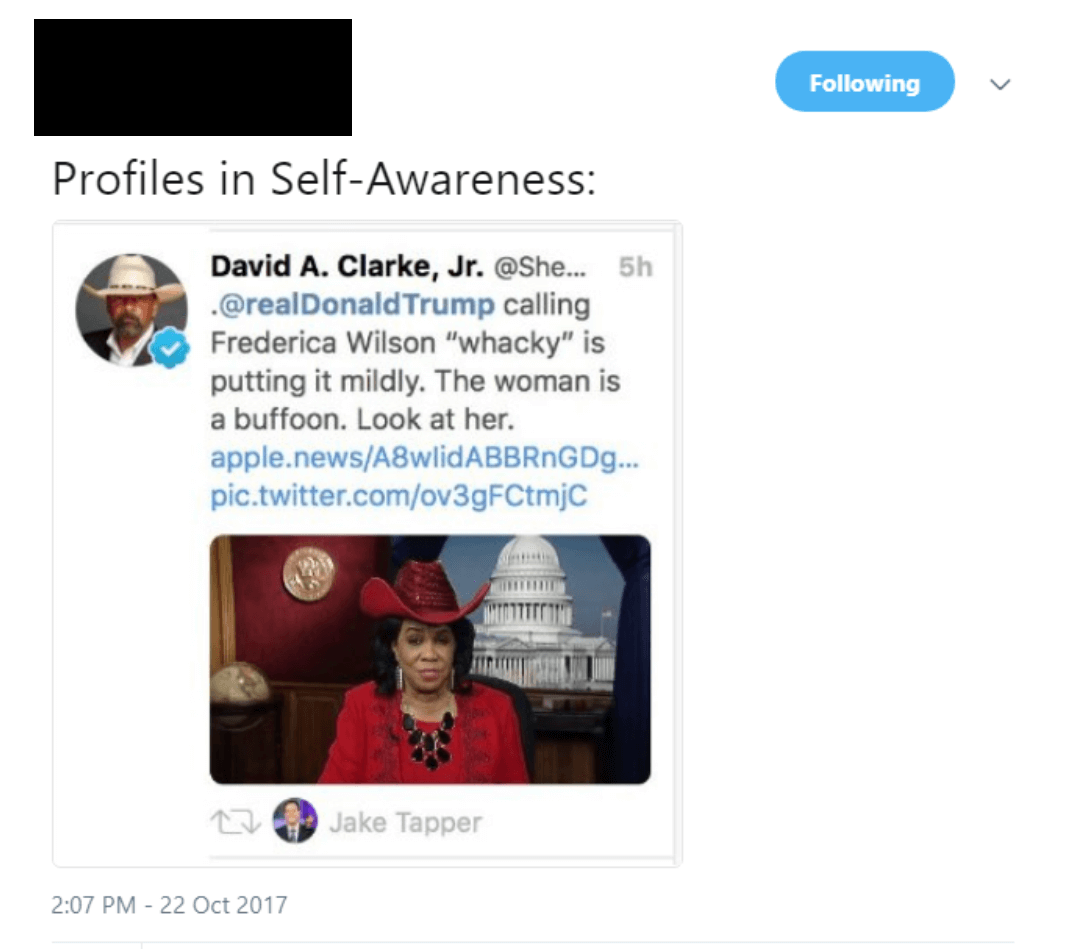 A Richard Spencer supporter in the video in the link in the tweet (that’s like describing a family relationship!) says:

This is not getting enough coverage. They spent $500k on security to let a Nazi speak—then Nazis shot at protestors. https://t.co/1nYHUPmEUC

Donald Trump seems determined to destroy the lives of as many as possible of those he looks down on.

A new Trump policy makes it almost impossible for undocumented teens to get abortions pic.twitter.com/H80H78wkc4

One of mine from yesterday.

The logic of the situation: people need to be saved from God, not by God. pic.twitter.com/ZVtdEcPNM6

I could put this in the Human Rights Tweets section, but that’s glossing over the reason for the prejudice just like this video does. The problem is religion. LGBT+ people all over the world suffer like this because of the teachings of RELIGION.

“By the time I left Chechnya, I could barely crawl.”

This man says he was tortured for 12 days in Chechnya for being gay. pic.twitter.com/VN6Xm1TV7n

I posted this cartoon:

To which I got this excellent article in response:

I don’t usually tweet small dogs because they’re not real dogs. Yappy little creatures. But I admit this is cute and cool! (And I don’t have to sully the Dog Tweets section!)

Get your head around this!

The Carving Of An Incredible Dragon Bench With The Aid Of A Chainsaw, And It Looks Wonderful And Unique https://t.co/2J5Ke9aAQp

Art works made out of chocolate!

These paintings are so beautiful, you can almost eat them. pic.twitter.com/AgkyvtAAym

This really happened! A man invited strippers into his home. They stole sixteen guns. “Don’t invite strippers into your home,” he says! I love the way that magazine is positioned. Reminds us just what guns are a replacement for in many men.
(Via Ann German.)

I know a man who did what the mutant in this clip did. He was out the back of the farm and his tractor rolled on him and his hand got trapped. So he cut it off. Then put a tourniquet on it and walked several miles back to the farmhouse, where he alerted a neighbour to collect him to take him to hospital. It was the only way to get out of the situation. It’s not just superheroes who are brave.

Baby fox with a mustache… pic.twitter.com/LFTkAj8wmv

A tiny piglet walking into your hand pic.twitter.com/opOkxS4D0F

A series of tweets from Dr Andrew Digby on Kakapo chicks.

Whenua Hou has dense rimu (olive trees in pic), which makes it ideal for #kakapo, which breed when these ‘mast’ (mass fruit). #conservation pic.twitter.com/dmZa06K7DB

Well, almost ideal. The rimu fruit on WH very rarely ripens. #kakapo breed because of mast, but then have no ripe fruit for chicks pic.twitter.com/beWEIaUzY1

Because of this, we need to provide supplementary food, and hand-rear some #kakapo chicks which would otherwise starve. #conservation pic.twitter.com/76OI0M6et4

In all breeding seasons except 2002 (when rimu ripened), most #kakapo chicks would have starved without #conservation intervention. pic.twitter.com/mLKMN7AKjv

Our team are currently changing transmitters on all 69 #kakapo on Whenua Hou. About ⅓ of way through. #conservationtech #conservation pic.twitter.com/ZUk2yb7R0E

Every #kakapo wears a ‘smart’ transmitter. Used to find them, and monitor their activity: health, mating and nesting. #conservationtech pic.twitter.com/Il154aXgNV

#kakapo are fitted with a transmitter in the nest, and wear them for life. Fitted precisely, and checked each year, we have very few issues. pic.twitter.com/zOZJLybF8r

I think this is really sad. It’s like waiting for your name to be called when they pick teams!

These clever dogs all wait patiently for their names to be called pic.twitter.com/9QYnglLDY0

Are you looking today Diana McPherson? This one’s for you!

She seemed lonely so we bought her a friend pic.twitter.com/gDnajdj37B

Such a pretty boy! pic.twitter.com/THlVLzqBcY

There are more comfortable parts of a bed, but each to their own I suppose.