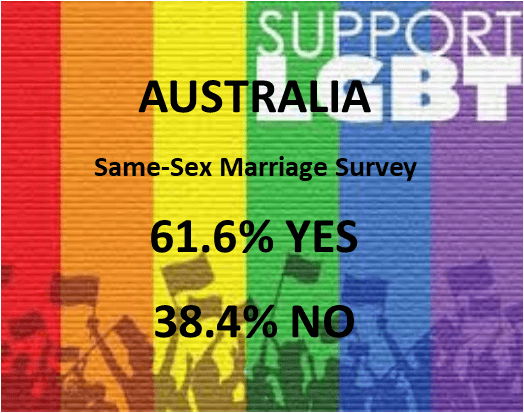 The fantastic news in this part of the world, seen in multiple tweets, is that the Aussies have come out in support of marriage equality. Anyone who thought that the result would be otherwise was dreaming of course. It’s been obvious for years that the majority of Aussies want same-sex marriage to be legal.

This poll, though officially conducted, was a non-binding postal referendum. However, the high turnout and strong YES vote means the government cannot ignore it. The Australian Labour party is to introduce a Bill into parliament this afternoon to make same-sex marriage legal. Some MPs who oppose same-sex marriage plan to support the Bill. This is because the vote of their own electorate was an overwhelming YES.

More difficult is the choice of some Labour MPS. There are some whose electorates were amongst the few who voted NO. They will be torn between doing the right thing for society and representing the wishes of their constituents.

UPDATED: #MarriageEquality voter turnout map. Lingiari/NT stands out – is this down to voters, or ABS process? https://t.co/6wkQpEWgGg pic.twitter.com/GeTcAiaUsk

I found Yvonne Gardner, 75, an lgbti campaigner, almost in tears. She clings my arm, and whispers in my ear; “I’ve been fighting for this for 50 years”. #LoveWins @heldavidson pic.twitter.com/gp3sXRFS1v

Another bird celebrating the day.

Most of us know this of course, but it’s great to see someone on Fox News outlining the facts of the situation.
(Via Ann German.)

Shep Smith just took apart the Uranium One conspiracy theory in what amounts to a methodical annihilation of his own network’s coverage of the story. pic.twitter.com/D439QyIBWU

It’s okay to tell lies if it gets an Evangelical Christian into the Senate apparently.

Ed Stetzer, who is a former Moore supporter, doesn’t think so. Here’s what he says about the lies Kayla Moore is spreading around.

WTF is going on the the USA? They reckon they’re the greatest democracy in the history of the world! What a joke!

The Republicans just broke a record – and not the good kind pic.twitter.com/yqo9LTJlHD

We got this news today too. What a waste of money this whole thing is!

The Trump administration is hiring 12 attorneys to seize land for his border wall https://t.co/chuiFLebJO

I don’t personally believe that Jeff Sessions is dishonest. He is a racist. I’m not sure if he realizes he’s a racist. He’s one of those people that think they treat everyone fairly but their racism is so ingrained they don’t understand how much it effects them. We get far left groups who talk about all white people having a sort of “toxic whiteness”. That it’s all but a crime just to be born white. It’s people like Jeff Sessions that they can point to and say, “I told you so.”

Jeff Sessions was asked why the FBI investigates ‘Black extremists’ but not the KKK. It did not go well for him. pic.twitter.com/4HW2cYSvyl

Both the far left and the far right seem to have lost all touch with reality. In this case, it’s the far right.

I’m continually amused by conservatives’ idea of what would make liberals angry.

To clarify: no, smashing your $120 coffeemaker doesn’t hurt us at all. Go ahead. https://t.co/gnzIbbVs3l

On the subject of Sean Hannity. He’s apparently okay when it comes to the “don’t touch your female co-workers” rule. However, he’s an enabler. He makes excuses for, and actively supports, men who are harassers, abusers, and worse. From the time sexual abuser Donald Trump announced his candidacy, his show became little more than a Trump infomercial. He had Bill O-Reilly on when no one else would, and wanted him back. Now he actively supports Roy Moore.

Another mass shooting. California this time.

For those who want to be willfully ignorant about #GunControl, let me remind you about the reality of gun trafficking and how guns get around to places like Northern California and Chicago who have the strictest in-state gun laws. pic.twitter.com/nmMZpRvQ5u

Some information on the earthquake on the Iraq-Iran border.

The earthquake that hit Iran and Iraq has devastated thousands of lives. pic.twitter.com/jKWGbSSSeo

A Suffragist showing off her pants in 1916. pic.twitter.com/cNrau6A1xv

Ways to amuse yourself … I’m gonna use #1 over the upcoming holidays! pic.twitter.com/bhfEQtPZXl

I like Ben Bochner’s response here.
(Via Ann German.)

I hear they’re painting a whole wing of San Quentin gold so the President can spend more time with his family.

I worked this one out too. 🙁

I have found that the secret to successful relationships is to stay out of them.

Not long to go!

What a cool idea!

Big and beautiful. Not sure I’d want to stand next to it though. I’m not good at with bad smells. Still the plant would probably appreciate my vomit – it would attract a few extra flies!
(Via Ann German.)

The stinking corpse lily is the largest individual flower in the world. It’s critically endangered &smells of rotting flesh to attract flies pic.twitter.com/eJKJHw8H4Z

There might still be hope for the Great Barrier Reef pic.twitter.com/3mxwyBJFYk

What a thrill that would be!

а little girl holds a penguin’s flipper as they walk together around the London Zoo, 1937. pic.twitter.com/iDMJ2hS4dg

We all know a human who looks like this!

‘Please keep the noise down, I’m trying to read’ pic.twitter.com/7hIzsgdXZG

Cows line up to greet the puppy pic.twitter.com/l815vZkN1V

Even Spidey knows cats are best!

It was obviously put here for us!

Those eyebrows make for a genuine Judge Cat face!

The kits grow up so quickly …

A cat costume I approve of!

If I told you I wasn’t upset about not being cast in Disney’s live-action remake, I’d be lion. pic.twitter.com/ZFAyCw0pbA

The final tweet of the late Paddles, former first cat of New Zealand.

I am stardust. ❤️