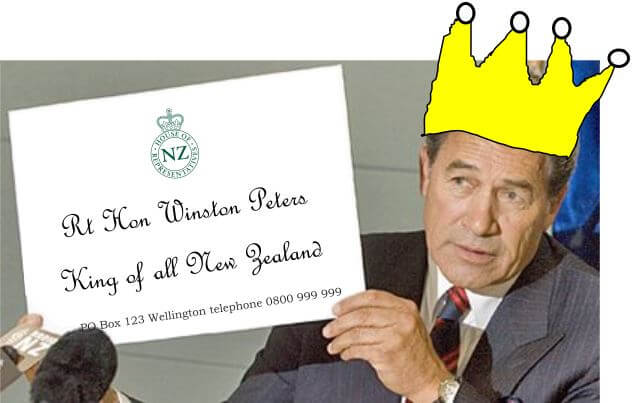 I don’t know if there are any tweets about it because I haven’t looked, but a story in the Washington Post is causing a bit of a furore here. A USian living in NZ, Ben Mack, wrote a story for them called ‘How the far right is poisoning New Zealand‘. It’s incredibly ill-informed and quite maddening.

The “far right” he’s talking about is Winston Peters, who I’ve railed against several times in my homilies. Now personally, I have no time for Peters or his party, NZ First. When I saw the result of our election and the realization hit me that whoever lead our government, Peters was going to be a part of it, I was extremely unhappy. But that doesn’t mean I’m happy for him to be smeared in the international press.

Peters is not far-right. He’s a populist. He’s our version of Donald Trump. He treats the media like crap. He says outrageous things that he knows will appeal to certain segment of society. He’s anti-Asian immigration. He wants our immigration numbers slashed by tens of thousands. And there’s legislation already before parliament to prevent foreigners buying existing (not building new) houses here.

However, that’s pretty much where the similarities to Trump end. Unlike Trump, Peters is an extremely talented politician. (Even his greatest enemies will admit that if they’re honest.) He’s mostly honest. He doesn’t pander to the religious right. And, he actually has some genuine policy achievements under his belt from past stints in government.

Mack says that Peters is:

Appealing to ethnically homogenous, overwhelmingly cisgender male voters with limited education and economic prospects who feel they’re being left behind in a changing world is nothing new for the far right.

But there aren’t actually that many of those in New Zealand, and most of them vote for Labour anyway. The people Peters appeals to most is the Grey vote, and though the demographics aren’t yet available I suspect a slight majority of his supporters are women. The general profile of the NZ First voter is older people who are uncomfortable with the increasing diversity of New Zealand society. They are happy with a bi-cultural New Zealand, but not a multi-cultural one. They call themselves New Zealanders and feel the term applies to anyone born here – most of whom are of British, Irish, or Maori descent. They’re okay with Asians who were born here too on the whole, but they don’t like anyone whose first language isn’t English, especially if their skin isn’t white.

By appealing to those people, Peters has a solid base, but he only got seven percent of the vote. Most people eschew his message. This isn’t the US where a combination of “deplorables” and a two-party system got Trump into the White House. If Peters tries to push his luck here he will be punished at the ballot box, and he knows it. He tried it before and his support fell below the five percent threshold for getting into parliament. We may have to put up with Peters for three years. But unlike Trump, he isn’t actually incompetent and he’s also pragmatic. And if he screws up, no one will vote for him. That’s the beauty of the MMP electoral system and an educated electorate.

And apart from New Zealand First, the other two parties in the three-party governing coalition are Labour and the Greens. We have babies in the house now. Yesterday the speaker had to hold one of the babies while his mother was making a speech. Maternity leave is about to be increased to 26 weeks. The minimum wage is going up faster than before; by 1 April 2021 it will be $20 per hour. There’s a lot more along those lines too. We have a progressive government that is making so many promises I worry that we can’t pay for them. Whatever it is, this government is NOT “right wing”.

I think there might be a backlash against the ignorance perpetrated by the US president. His ghastly rhetoric is making more people aware of issues such as these, and the majority are realizing that, for example, transgender is nothing to be afraid of.

BTW, just so you know.

Please update your stories to note that the first out trans person elected to public office was Althea Garrison in 1992, a black trans woman who won as a Republican in Massachusetts.

I understand how the women in this feel. It would be a huge thrill to meet former president Obama!

When you’re a Republican, it appears it’s only bad to commit sexual harassment when the victim is male.

Moore after sexual allegations: ‘I refuse to stand down’ https://t.co/XHe8Xs9KvD

This is really good news! (And not the sort of thing a “right wing” government would do, by the way!)

This is very good!

Exclusive – Carter Page Has a Tell: The Daily Show https://t.co/NAmoXf1wiN via @YouTube

The rules aren’t quite as stringent in New Zealand, but they are similar. We don’t have many gun deaths either.
(Via “Archie Debunker”.)

Isn’t it time more was done to stop gun deaths?
(Via “Archie Debunker”.)

The Artist Behind This Gun Control Cartoon Is Sick Of America’s Dangerous Obsession https://t.co/zDC9HPaNnH

WTF is wrong with the USA? How could the hospital even consider denying surgery for this reason? Effing unbelievable!

This 2-year-old is being denied a kidney transplant because of his father’s criminal record pic.twitter.com/q2ZAPeexDr

A woman shouldn’t have to go through this to make sure her attacker can’t victimize someone else.

This rape survivor is fundraising on GoFundMe to send her rapist to prison pic.twitter.com/bPFqBHKsHt

This guy is state auditor of Alabama FFS! As many others on Twitter are saying, I thought there was nothing left that could surprise me about the US far right.
(Via Ann German.)

“Take Joseph and Mary. Mary was a teenager and Joseph was an adult carpenter. They became parents of Jesus.” https://t.co/54wBvpGyOS

Believe it or not, that was Louis Fer’s defence of Roy Moore’s shenanigans!

“Take Joseph and Mary. Mary was a teenager and Joseph was an adult carpenter. They became parents of Jesus.”https://t.co/IhaWiCEFmq

There were people who stood up to Hitler. Unfortunately, there weren’t enough of them.

It’s amazing the change in such a short time.
(Via “Archie Debunker”)

The Temperature of the World since 1850 pic.twitter.com/VEBDDJPjH4

New Zealand is a bit behind Europe when it comes to recycling, and we need to step up our game. This Auckland company is a great example of some of those that are doing their best to improve things here.

This is effing unbelievable!

Trump’s pick for top environmental advisor is embarrassingly clueless. The environment is so screwed pic.twitter.com/0g1bJ8sJ9q

Get in the Christmas Spirit today! ????

What an amazing studio! I’d like it for a bedroom!

40 Awesome Tombstones By People With An Immortal Sense Of Humor https://t.co/687wGDOY3A

It apparently tastes the same, but would it really be as satisfying?

This is very cool!

The oldest house in Aveyron, France; built some time in the 13th Century. pic.twitter.com/AOfhtDKYxL

Enjoy this wonderful 10 minute video tour of the Bystock Nature Reserve in Devon.

What a cool place!

This microscopic critter is called Lacrymaria olor or ‘Tear of Swan’ in Latin.
Its can stretch its neck 7x its body length to catch prey! pic.twitter.com/UXXcgAlBL6

From the YouTube description: “Never before have humans journeyed to the Antarctic deep sea. Scientist Dr Jon Copley reveals what it’s like to travel 1000m beneath the ice.”

What are they talking about?

Boom! A sea-lion received a ‘good talking to’ by a yellow-eyed penguin/hoiho at a beach on the Otago Peninsula: https://t.co/hvIBLxMAI5 @yeptrust pic.twitter.com/7uLwrrszfb

Boom! Kiwi scientists captured footage of a great white shark in the Kermadecs and the shark captured the camera! https://t.co/BGX1L7HsxO pic.twitter.com/AbRzIkQhnw

The antmimicking spiders look and walk like their favorite prey, ants. In some species, the males have a long, enlarged mouthparts that resemble the head of an ant, which split open when it’s time to strike. pic.twitter.com/td0KVb7qcD

There is no such thing as a cute cockroach. They are all evil, disgusting creatures!!!!!!!!!

So you think you hate cockroaches? Try these beauties! https://t.co/8docEjYApE pic.twitter.com/o5NRaCQXO1

Spiders are pretty bloodthirsty critters, but much nicer than the insects in the two above tweets somehow.

This astonishing photo shows an Apricia jovialis capturing an Araneid, in its own web. Photographed by Nick Monaghan. This is the first time this behaviour had been observed and captured on film for this species of jumping spider. #Educate #TurnFear2Fascination and #Lovespiders pic.twitter.com/m7yQCDHHMm

Very cool! A grasshopper that looks like the stones around it!

How’s this for mimicry?!

I’m not even sure I’ve put this in the right section! WTF is it?

New Zealand has only one native mammal – and it’s a bat.

Boom! Happy Halloween ???? Here’s a NZ long-tailed bat posing for the occasion. Want to know more about him? ==> https://t.co/NZ1HUKCDGZ pic.twitter.com/GDzPBKaCZo

A kakapo peeking out at the camera from it’s nest in a hollow tree.

Kiwi chicks are so cute and fluffy!

This season’s kiwi chicks have started hatching! Find out how the Fiordland tokoeka are going in our latest blog: https://t.co/aqofWwoHMr pic.twitter.com/ehHYT2I0cZ

The whio is a NZ native duck – and here’s a paddling of them for you to enjoy!

A paddling of precious whio have hatched at our zoo! These ducklings are part of our breed and release programme for native wildlife. pic.twitter.com/gELhipVTgx

I missed this cool tweet when the Kea won the Bird of the Year competition.

#conservation dogs are important for finding #takahe nests and chicks in the breeding pens. Two of our rangers have trained #takahe dogs. We aim to keep disturbance of breeding #takahe to absolute minimum, checking only when necessary. Pic: Chris Phillips pic.twitter.com/9iLXCmrwmQ

We have a lovely new Simon’s Cat video today! As always, it’s lots of fun.

The more you know. pic.twitter.com/xeLUMr4EgS

What the heck is you?! pic.twitter.com/CMzStaY1bV

What a cool dude!

My favorite cuddle buddy (don’t tell my husband). This is Charlie. pic.twitter.com/5sT9YvT2HF

The linings of some of my curtains look like this due to the cat of a prior occupant!

Get out and smell the daisies?

if you’re having a bad day here’s a happy cat pic.twitter.com/c55Z7CLyNU

I hope it’s on the way to my place!

we may need to get a size bigger. pic.twitter.com/XmkvvgL2UD